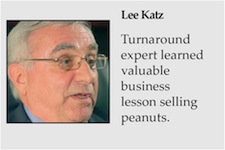 For most budding professionals trying to make their mark in any given industry, the word “peanuts” represents the measly amount of money they make when they begin working their first entry-level job. For Lee Katz, however, peanuts represent far more than a starting salary. They represent the Moment that ignited his interest in deal making and the Moment he began learning valuable skills that he carries into his current role as the chairman of GGG Partners, one of the leading turnaround firms in the country. Just like all of us, he had to start with peanuts (in his case literally) to get to where he is today.

In 1964, when Lee was 13 years old, he began selling peanuts to sports fans at Georgia Tech’s Grant Field. For every bag he sold for ten cents, he earned a penny in commission. As an added incentive, the seller who sold the most bags during the day received a $20 bonus.

“There was no second or third place. There was only number one,” Lee explained during the filming of our accompanying HD Moments video.

It wasn’t long before Lee figured out how to game the system to ensure he was the one who received the bonus at the end of each day.

For every bag of peanut bags sold, Lee and his fellow competitors would receive a token. They were counted at the end of the day, and whoever had earned the most would get to go home with a $20 bill. The sellers would compare tokens throughout the day. Lee’s Moment occurred when he realized he could count the tokens of other key sellers toward the end of the day and gauge how many he would need to collect in order to safely surpass the others.

“I finally figured out by counting tokens of the other key sellers in the crowd that if I bought one or two extra bags of peanuts, I could throw them in the trash and still get a bonus,” Lee recalled.

Even though he risked losing his own money if he couldn’t sell the extra bags of peanuts he purchased, he never lost more than $20, and therefore always made some sort of profit. 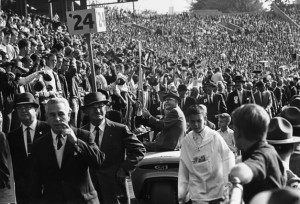 Grant Field in the early 1960s

When his job selling peanuts at Georgia Tech came to an end, Lee began selling programs at Ponce de Leon Park, a historic Atlanta baseball field at which the old Atlanta Crackers team played minor league baseball. His new gig had a similar incentive system and he soon began purchasing excess programs in an effort to claim the coveted bonus at the end of the day.

Lee, who received his bachelor’s degree in Industrial Management from Georgia Tech and graduated from John Marshall Law School, uses his experiences at both Grant Field and Ponce de Leon Park as lessons in his current position as the chairman of GGG Partners.

“Those lessons carry over to me being a workout person. We’re always playing ‘let’s make a deal’ with the banks, the vendors, the employees,” Lee said.

Lee entered the workout business in 1985 purely by accident when he found out that a company of which he was becoming president had “two sets of books.”

“The banker didn’t know about it, and so we had to play ‘let’s make a deal.’ Keep the company alive. Which we did. We worked things out,” Lee recalled. “And one workout became another workout, and several years later I hooked up with GGG (Grisanti, Galef & Goldress), which was then based in California. The rest, as they say, is history.”

Lee blogs at The Turnaround Authority and recently published a book titled, “How Not to Hire a Guy Like Me: Lessons Learned from CEOs’ Mistakes,” which gives advice precisely on what the title implies: how to avoid hiring someone in Lee’s line of work. In the entertaining and informative book, he advises business executives on how to avoid circumstances that might cause them to have to call a turnaround professional.

Bernie Marcus, co-founder of The Home Depot and chairman of the Marcus Foundation, wrote the forward to the book. “I have known Lee Katz for many years … What you are about to uncover inside this book can help ensure that you, as a leader, also avoid pitfalls. Read it. Learn from it. Benefit from Lee’s many years as The Turnaround Authority. That way, the only time you will ever see Lee’s face is either on this cover, or smiling across the table at a philanthropic endeavor.”

Lee traces his success in deal making back to the Moment he realized he could outsmart his opponents in a selling competition and come out on top by making a few strategic moves. He now passes that knowledge on to his clients, ensuring they get the best possible outcome in whatever tough situation they are working through in their business.

“Looking back to Grant Field and Ponce de Leon Park, that Moment has really helped me play ‘let’s make a deal’ throughout my life in turning around companies throughout the country,” Lee said. 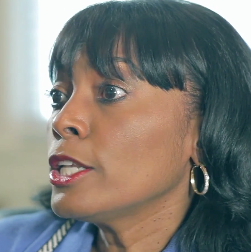 Next week in Moments: Cynthia Jones Parks, Midtown branding design firm owner who borrowed $50,000 and made a business gamble in the depths of the Great Recession.