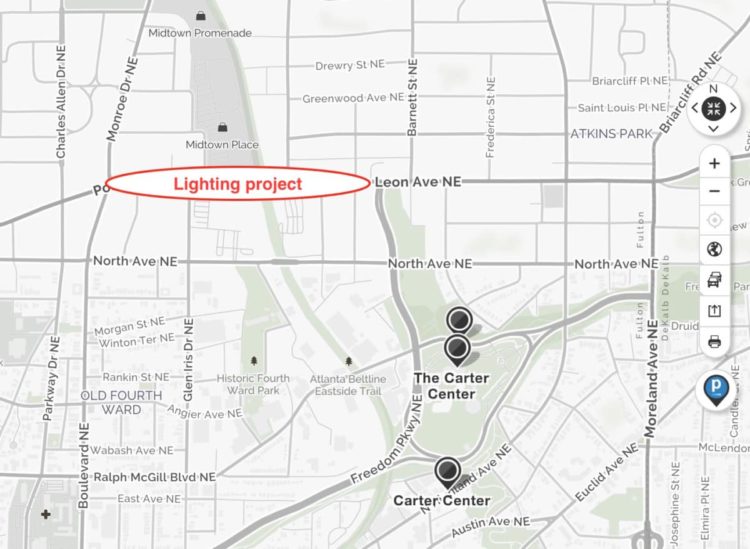 Pedestrians and bicyclists heading to and from the Atlanta BeltLine’s Eastside Trail near Ponce City Market are to have their pathway illuminated by a lighting project the Atlanta City Council is slated to approve Tuesday. 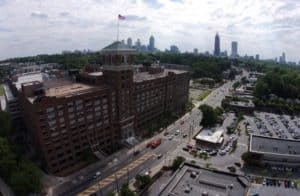 Ponce City Market is at about the halfway point between the boundaries of a plan to illuminate a bike/ped pathway along Ponce de Leon Avenue. Credit: theb-linebroker.com / Georgia Drone Services

The project is part of the ongoing effort to retool Ponce de Leon Avenue into a Complete Street, one where walkers and cyclists have more equal footing with motorized vehicles.

The lead sponsor of the legislation is Councilmember Keisha Lance Bottoms, who serves a district in southwest Atlanta and who has announced plans to run for mayor. The second sponsor is Councilmember Kwanza Hall, who represents the area.

Plans call for the Georgia Department of Transportation to use federal funds to purchase and install the lighting system. Atlanta is to be responsible for paying for the energy to illuminate the lights and to maintain and operate the system. Terms call for a 50-year agreement.

The bicycle/pedestrian facility lighting project is to flank Ponce de Leon Avenue. The boundaries are the intersection with Boulevard/Monroe drives, and the stretch of Freedom Parkway that deadends into Ponce de Leon Avenue, according to legislation pending before the council.

The entire project stretches about 3,000 feet, based on GDOT’s maps. The Eastside Trail is located in about the middle of the project.

The pending legislation is slated to be approved without discussion. It’s included in a package of legislation that is eligible for approval by a single vote because it received unanimous approval by members of a council committee, in this case, the council’s Transportation Committee.

The legislation does not outline anticipated costs to power, maintain and operate the lighting system. Those costs were marked as “not applicable” in the pending legislation. 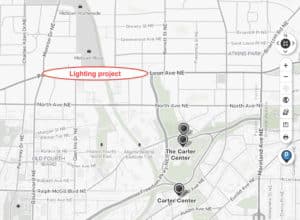 Those details likely are to be outline in whatever request for proposals the city chooses to release, probably later this year.

That said, the concept of the illumination system stemmed from a grant provided by the Atlanta Regional Commission, according to the legislation. The ARC provided a Livable Centers Initiative grant that the BeltLine is using to design pedestrian and bicycle facilities.

Information about uses and results of the actual grant was not immediately available on New Year’s Day on the ARC’s LCI website.

According to the latest report on the project by the BeltLine, dated four years ago, in February 2013, details of the project along Ponce de Leon Avenue include:

“Project Scope: The proposed road section (to be partially implemented as part of milling project) includes: