When we think of the baby-boomer bible, Rolling Stone, we tend to think of Jann Wenner and Annie Leibovitz and even Cameron Crowe (“Almost Famous”). 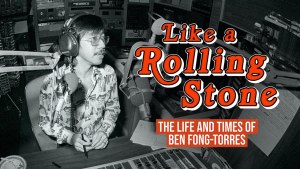 A poster of “Like a Rolling Stone: the Life & Times of Ben Fong-Torres”

Suzanne Joe Kai’s film is appropriately worshipful without going overboard. It’s almost as Ben’s particular persona wouldn’t allow that. He’s something of an enigma, with his wild n crazy shirts and his repeated mantra, “Crazy.” (Actually, “Almost Famous,” in which he’s portrayed by actor Terry Chen may overstate the whole “Crazy” catchphrase a bit).

The movie is sprinkled with appealing rock esoterica. For instance, someone comments to Stevie Wonder that’s it’s probably worse to be Black than to be blind. Apparently, Mick Jagger learned his moves from Tina Turner. And some genius decided it would be a good idea to find a white clone of Miles Davis.

For someone who was the only Asian-American kid among 450 students when he was growing up and whose father had to pretend to be Filipino in order to enter America (there were rules concerning the Chinese), Ben comes across as remarkably centered and exceedingly comfortable in his own skin.

Ultimately, that proves to be something of a problem.

The movie itself is similarly centered and comfortable in its own skin. It needs to wake itself up, toss in a little drama or rock n roll flamboyance. The picture is always entertaining, but it seems ever so slightly subdued.  Or maybe too well-behaved. Rather like its protagonist.

“Like a Rolling Stone: the Life & Times of Ben Fong-Torres” is available for viewing on Netflix.