Little Five Points is to be a safer and more pleasant place to walk and bicycle upon completion of a project that got its start Monday with $290,000 in funding approved by the Atlanta City Council. 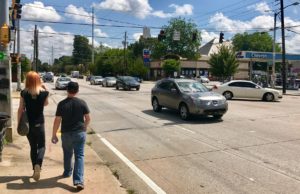 Little Five Points is a cluster of congestion that an upcoming study is to address to improve safety of all modes of transportation. Credit: Kelly Jordan

The study area reaches from Little Five Points to MARTA’s Inman Park/Reynoldstown Station. It encompasses neighborhoods on both sides of Moreland Avenue.

The project is part of an entire transformation of the area that some civic leaders have been working on since 2014. That’s when business leaders won the city’s approval to create a mechanism for owners of commercial properties in the area to fund projects in the L5P Community Improvement District.

The retooling of Findley Plaza was another CID project. The park is at the heart of the district and its new look includes the removal of railings around planters that were intended to keep people from sleeping in the planters or using them for personal needs.

Plans for the mobility improvement project calls for the L5P CID to manage the project on behalf of the city. Atlanta’s recently established Transportation Department is overseeing the project and is to approve any recommendations before any work might begin, according to terms of the draft agreement that traveled with the legislation.

The project is to be finished this year. The draft agreement does not set a target completion date. Craig Pendergrast, chair of the L5P CID is named, as the CID’s point person on the project. 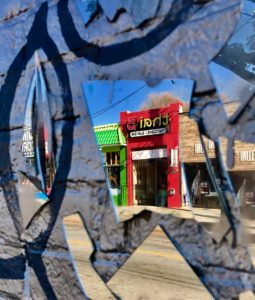 A sense of perspective adds to the experience of Little Five Points. Credit: Kelly Jordan

The council tapped two sources of funding for the $290,000 project:

The planning funds are divided between two geographic areas:

The area now is congested with all manner of competing forms of transportation.

Pedestrians and bicyclists are in danger from vehicles whose drivers don’t always provide them right of way. Bicyclists and skateboarders cruise almost silently, sometimes startling pedestrians and vying for space with vehicles. E-scooters were an issue, until the pandemic reduced their numbers. 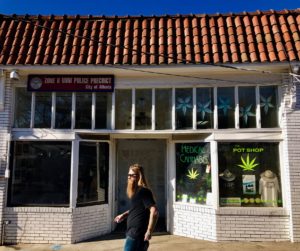 The coexistence of an Atlanta police precinct and a medical cannabis shop is one of many marks of a new era in a neighborhood that once was among the edgier in Atlanta. Credit: Kelly Jordan

This is the entire scope of work that’s outlined in the legislation: 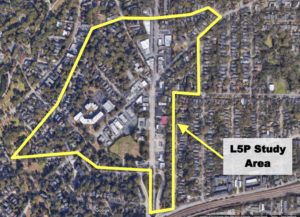 The Atlanta City Council has approved a $290,000 project to improve safe movement and wayfinding signage in the area of Little Five Points inside the yellow line. Credit: Atlanta