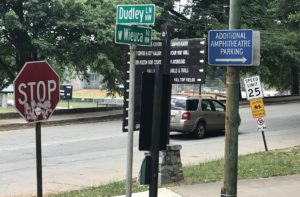 Live Nation has agreed to work with the city to correct the situation, according to the document prepared by City Auditor Amanda Noble and presented Tuesday to the Atlanta City Council. The audit was started in late 2018 and delayed, initially, by Live Nation’s refusal to meet auditors’ demands for documents and, this year, by the pandemic, Noble wrote in her transmittal letter.

Live Nation contended during a meeting with city officials that it worked with three minority subcontractors at Chastain Park Amphitheater. City officials determined two of the three subcontractors were not certified, or were in the process of being certified, as a disadvantaged business enterprise, according to the audit. This certification is awarded by the state Department of Transportation.

Atlanta’s Office of Contract Compliance is responsible for ensuring the contracts with Live Nation comply with the city’s minority subcontractor program, according to the audit.
Regarding the documentation of payments to Atlanta, the audit reported Live Nation refused to produce documents to prove that it has paid all the money it owes to the city. The audit repeatedly observes that Live Nation is not required to release such information under terms of existing contracts. The audit’s first page begins with this paragraph:

In a section where the audit recommends a contract amendment be drafted to address the issue of documentation, John Lavelle, the city’s director of real estate in the Department of Enterprise Assets Management observed, in full:

Previous Article
‘They work so hard and care so strongly about the people that they are serving’
Next Article
Equity in Early Childhood Education: Is Atlanta a Tale of Two Cities?