As our world has been thrown into chaos through a public health crisis and with racial injustice at the forefront, parks are among the few places people can go to achieve some semblance of balance, normalcy, and sanctuary.

Or, at least that should be the case. Too often, studies have found that disenfranchised neighborhoods lack equitable access to parks and natural areas. Certain historical markers in parks can and do make many Black people and people of color feel uncomfortable and unsafe. And we have seen even more glaring examples of racism taking place in parks recently, like that experienced by Christian Cooper in New York’s Central Park.

So, as we think about the need to build a more just and equitable society, local parks are a critical piece of this picture. Everyone deserves a quality park where they live. Parks should be safe, clean, and accessible to all. Parks should reflect each community’s unique character and meet their needs.

For over 30 years, Park Pride has been working to make quality parks accessible for all communities. One of the most meaningful ways we do this is through our grantmaking program (made possible with funding from Atlanta’s philanthropic community) which supports park improvements awarded to local Friends of the Park groups and conservancies. The engagement of local communities is a critical component of our grant program; the community, after all, knows best what they need and what park improvements will help them achieve their goals. Beyond the physical changes, successful grant projects strengthen relationships between communities, their parks department, and their elected officials. We are building more than parks. We are building trust.

Park Pride has always strived to distribute our grants broadly throughout our service area. The accompanying map shows the distribution of grants awarded within the City of Atlanta from 2004 to the present. The “growth line” (first introduced as part of Atlanta City Design, 2017) demarcates areas of strong or stable growth (above the growth line) and those areas of low or no growth (below the line). It would be a mistake not to acknowledge the racial and economic dimension of the growth line: areas north of the growth line tend to be whiter and include more middle and upper income areas, and areas south of the growth line tend to be middle and lower income areas comprised of higher percentages of Black residents and people of color. 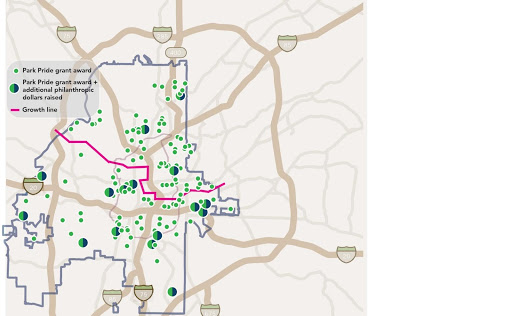 We know that there is a need for Park Pride to play a larger role in communities with greater economic challenges, and we have a history of raising additional philanthropic dollars to support these communities. Since 2005, Park Pride has raised an additional $4.5M in philanthropic support for park improvements in Atlanta with $4.3M (96 percent) going to parks south of the growth line. Noteworthy examples of this support include Kathryn Johnston Memorial Park on the Westside, Coan Park on the Eastside, and Adams Park and Collier Heights Park in the Southwest.

However, conversations that began in “Undoing Racism” workshops (conducted by the People’s Institute for Survival and Beyond) and that have continued through Park Pride’s ongoing work with a Diversity, Equity, and Inclusion (DEI) consultant (Dr. Dietra Hawkins at Both And Partners), indicate that there is more we can do. Changes are needed within the grantmaking program.

To date, a hallmark of Park Pride’s grantmaking program has been our matching component, which required communities to leverage our grant dollars to raise additional funds. Since 2004, $9M in Park Pride grant awards (which includes funding $650k in our other jurisdictions) have been matched with nearly $30M from local, public, and private sources, for a total of roughly $40M in community-driven park improvements.

However, the structure of our grant program and its matching grant requirement has proven to be a barrier for many communities (a reality that we attempted to circumvent by raising additional philanthropic dollars—the $4.2M referenced above—outside our grant programs to support community-led efforts in under-resourced communities). But now, with the support of our Legacy Grant funder, the Robert W. Woodruff Foundation, we have taken the next step to change the structure of  the program.  Moving forward, we will deploy 1/3 of our grant dollars through awards that waive the matching requirement for Friends of the Park groups in low-income neighborhoods within the City of Atlanta.*

Working together with local communities, philanthropic supporters, and government partners, I am confident we can build upon Park Pride’s work connecting communities to their parks and we can do so in ways that are responsive and supportive of considerations of diversity, equity, and inclusion. We will continue to refine our programs and to make them more accessible to communities in each of our jurisdictions. We will also look to diversify our board and staff and explore other ways to make Park Pride more accessible to all communities.  Parks present an increasingly crucial opportunity to bring communities together. We invite you to join us in this effort.

PS: Presently, the City of Atlanta is working on ActivateATL: Recreation and Parks for All (a Comprehensive Parks and Recreation Master Plan) that prioritizes equity in the plan’s outreach, development and implementation.  I would encourage you  to take the survey and to attend one or more of the virtual public meetings to ensure your voice is heard.

*These neighborhoods will be defined by the Community Development Impact Areas where at least 51 percent of the population are at or below 80% of the Atlanta area median income.