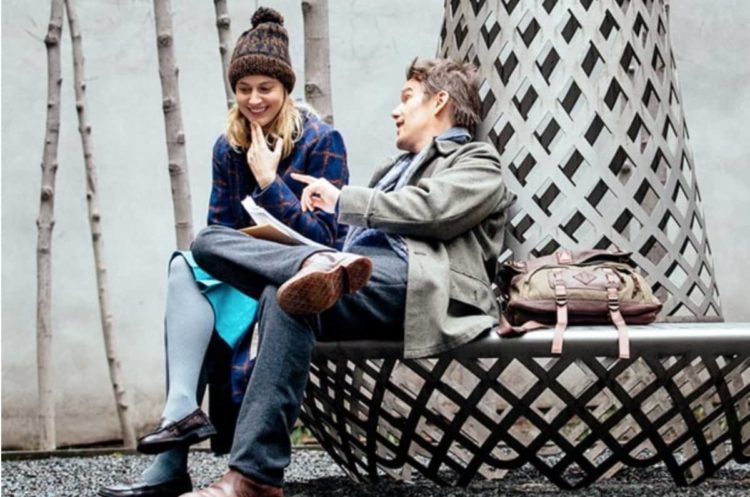 That’s pretty what happens in Rebecca Miller’s delightful new film, “Maggie’s Plan.” The title character, cleverly played by Greta Gerwig, is ready to have and raise a child. However, she’s not ready to get married. 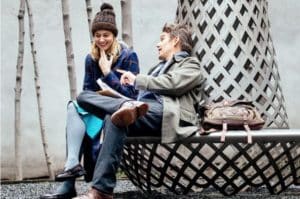 So, it’s daddy-donor time. “Isn’t that something people do when they’re 49 and desperate?” asks her friend (and former lover), played by Bill Hader.

Nuh-uh, says Maggie. She’s not only already picked out Mr., um, Right, but she has some stipulations. While she’s willing to meet Sperm Daddy, she’d rather not have any post-please-pass-your-seed contact. Guy (Travis Fimmel), an ingratiating millennial sort with a mathematical bent and a burgeoning pickle business, is fine with this – though, once he sees pretty Maggie, he’s also willing to donate his sperm the old-fashioned way.

But a funny thing happens on the way to artificial insemination: Maggie becomes attracted to and then involved with a colleague at The New School where she teaches. He’s John (Ethan Hawke) and he’s working on a novel, which he asks Maggie to read. His enthusiasm for her enthusiasm about his writing draws them closer (red flag, folks).

Julianne Moore plays a formidable professor whose husband leaves him for another woman. Credit: dailymail.co.uk

One small problem: John is married. His Danish wife, Georgette ((Julianne Moore, having fun with a “wascally wabbit” accent), is an extremely famous professor at Columbia (Hmmm, where Moore also “taught” in “Still Alice”).

Which is to say, she is formidable.

However, pregnancy trumps academic credentials and when the movie picks up several years later, Maggie and John are married, with an adorable little girl named Lily. All according to Maggie’s plan, you might say, except for another small problem: While she and John are mad about their daughter, they’re no longer mad about each other.

So Maggie hatches another plan.

Though its milieu is mostly Manhattan at its most up-to-date, the tale Miller spins is almost Shakespearian in its sweet musings on love and other conundrums. At times, Maggie, John and Georgette oddly recall the mix-and-match lovers in “A Midsummer Night’s Dream” (from which we hear a brief bit of verse).

“Maggie’s Plan” is very much the sort of picture that evokes comparisons to Woody Allen’s earlier, better movies (the patch from the late 1970s to the early ‘1990s). However, Miller is also very much her own person, with her own voice, her own humor, her own notions of what fools we mortals be.

As the daughter of theater royalty (Arthur Miller is her father), Miller knows her way around this particular species of New York intellectuals blindfolded. Her throwaways are priceless.

For instance, John describes himself as a “ficto-critical anthropologist.” Maya Rudolph, who plays Hader’s wife, sports a “What Would Jesus Buy” T-shirt. And the first time Georgette meets Maggie, she admits she’s surprised to find she likes the woman who broke up her marriage. “There’s something so pure about you,” she marvels. “And a little bit stupid.”

There’s nothing stupid about “Maggie’s Plan.” Not the performances. Not the dialogue. Not the social grace notes. Not even the pixilated O’Henry twist that we should’ve seem coming, but don’t.

Even more important, we don’t mind that we don’t. Now that’s a lovely time at the movies.