‘Manchester By the Sea’ a heartbreaking exploration of grief 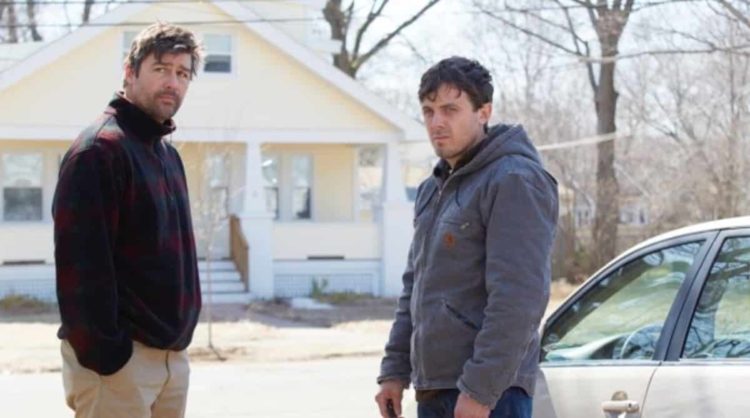 Casey Afflect (left) and Lucas Hedges capture the elements of a relation that doesn't appeal to either of them. Credit: thehollywoodnews.com

“Manchester By the Sea” is the reason people keep going to the movies.  Because, despite all the crummy ones, there’s always the chance you’ll stumble across one like this – a movie so powerful, so beautifully done on just about every level, that it’s instantly etched in your memory. And your heart.

Few movies can handle that delicate juggling act in which profound grief alternates with wickedly well-observed humor. Don’t get me wrong. “Manchester” is, ultimately, a picture riddled with sorrow and unspeakable tragedy. Yet it is also oddly optimistic.  A newborn cries at a funeral service – a birth astride a grave, as Beckett would’ve said. 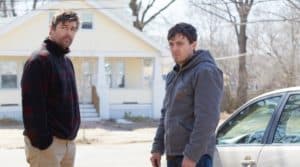 Casey Afflect (left) and Lucas Hedges capture the elements of a relation that doesn’t appeal to either of them. Credit: thehollywoodnews.com

Kenneth Lonergan’s picture – he wrote and directed it – is about many things: family, loss, sorrow, starting over (or not), and the possibility of redemption. At its center is Lee Chandler (Casey Affleck). “The Lee Chandler?” asks a high school hockey coach, then a vice principal, then a few other random Manchester residents.

An ax murderer, we wonder. A wife-beater? Perhaps a child molester?

About an hour in, we learn he is none of these, but he is an essential component of a terrible tragedy, one that becomes more tragic the more we learn about it.

When we meet Lee, he’s working as a handyman of sorts in a blue-collar suburb of Boston. However, clogged drains and cranky clients are nothing compared to what he already carries around inside – something so explosive that he routinely ends his evenings at his local bar by starting an unprovoked brawl with total strangers.

Lee’s brought back home to Manchester by the premature, albeit not unexpected, death of his brother Joe (Kyle Chandler) from congestive heart failure. To his considerable surprise, Lee learns he’s been appointed the legal guardian of his 16-year-old nephew, Patrick (Lucas Hedges). 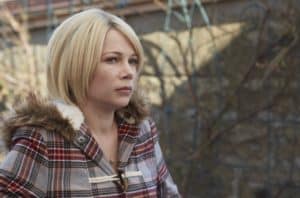 Michelle Williams delivers an essential supporting-actress performance as an ex-wife who can barely stand to pass her ex-husband on the street. Credit: thehollywood.com

This suits nobody. Not Patrick, who doesn’t want to leave his girlfriend(s), hockey team, basement band, i.e., his entire life as a high school junior to move to Boston.  And it certainly doesn’t suit the barely-functioning Lee who simply can’t move back to the place where he will always be known as, well, the Lee Chandler.

The shifting, often contentious relationship between Lee and Patrick is the film’s focus. Surrounding it, however, are a half-dozen characters who are inescapably part of Lee’s reality – past and present.  There’s his ex-wife (Michelle Williams), who can barely bring herself to pass Lee on the street. And Joe, who is lovingly fleshed-out in a series of flashbacks. And Joe’s ex, i.e., Patrick’s mom (Gretchen Mol), a sad-sack alcoholic who’s found a new life (maybe) with a happy-face evangelical (Matthew Broderick, a funny way to think of how Ferris Bueller ended up).

Lonergan’s screenplay is spectacular. He has that unique writer’s ear that understands how dialogue can sound completely realistic while, at the same time, convey a heightened sense of what’s being said and why.

He can be off-handedly funny. Consider a discussion of “Star Trek” vs. “Star Wars” that takes full advantage of the patented New England “Pahk your cah at Hahvahd Yahd” accent.

And then he can toss off a line or an observation that’s so startling on-target it makes your heart ache.  When, near the end, Lee says, “I can’t beat it,” four simple words have rarely had so much resonance.

Affleck, aka, the younger, more talented, handsomer Affleck brother, has always had a certain reticence on screen.  Think of his Oscar-nominated turn as the craven Bob Ford in, “The Assassination of Jesse James by the Coward Bob Ford.” Or perhaps you remember him as a private investigator in brother Ben’s “Gone Baby Gone.” Here, his strangled delivery and wary eyes convey the sort of dazed heartbreak that’s beyond heartbreak. This is a massive performance.

By the end, you notice that the leaden New England skies are a lighter gray than they were earlier.  But you also note that a lighter shade of gray is still gray – though, occasionally, a few streaks of light do manage to break through.