MARTA by the Numbers: Contractors throughout state benefit from MARTA

Once upon a time, a conversation about “MARTA by the Numbers” dwelled on the number of passengers served by X number of buses and Y number of trains. 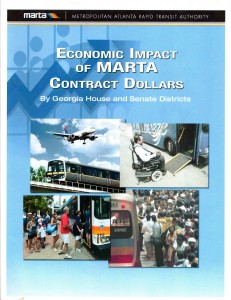 How quaint that seems in today’s era, when so many issues seem to be rendered into component parts that are quantified.

Not surprisingly, MARTA paid the greatest amounts to vendors with business addresses in the 10-county metro area.

Perhaps surprisingly, significant payments have been made in each of the 10 metro Atlanta counties, although MARTA serves only DeKalb and Fulton counties.

Surprisingly, payments have been made to contractors throughout the state. Payments were made from Blue Ridge to Bainbridge to Brunswick. Nor did MARTA overlook Middle and South Georgia, and even coastal communities.

MARTA rang up business in areas surrounding Columbus, Macon, Tifton, and Savannah, according to maps MARTA made available at its board meeting this month. It was the board’s first meeting since voters overwhelmingly rejected the proposed transportation sales tax in the 10-county metro area.

The map of spending by Senate district provides an easy-to-view snapshot of expenditures. That’s because Senate districts are large enough to provide a general overview, whereas the House maps present a more granular representation of spending.

Of the Senate’s 56 districts, 43 rang up at least a few dollars of MARTA business. It may be only $317, or it may be $418.5 million, but MARTA contracts bolstered the local economies in those 43 districts. 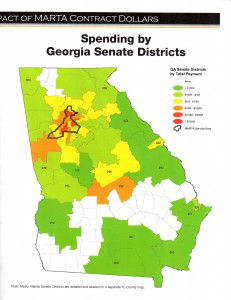 MARTA reported using contractors in 43 of the 56 districts in Georgia’s state Senate.

The hotspots on the Senate map are located in Fulton and DeKalb counties, with a finger of purchasing snaking into Gwinnett County in the Lilburn area.

Next up are counties adjacent to these two.

Cobb and Gwinnett counties have significant areas marked in high-value orange and reds, followed by lesser valued contracts in the counties of Cherokee, Clayton, Douglas, Henry, Fayette, and Rockdale.

Of the 180 districts in the House, 141 districts were home to businesses that received MARTA contracts. These maps are more challenging to read, because the districts are smaller for the House than the Senate.

The House maps reveal that MARTA spending on vendors was concentrated above the Fall Line, the geological boundary from Columbus to Augusta that divides the state.

Otherwise, MARTA contracts were in specific communities that surround the urban areas identified in the Senate map.

The following chart shows how Atlanta’s five core counties fared in terms of MARTA contracts from 2007 through 2011. These figures are for Senate districts, which do not necessarily follow the borders between and among counties: 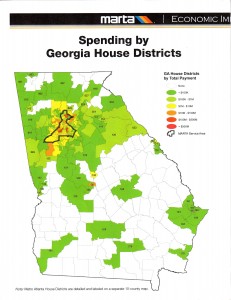 This map of Georgia House districts provides a more granular view than the Senate map of the location of MARTA vendors. 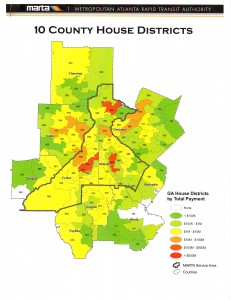 MARTA reported that its major spending was with contractors was in these House districts.