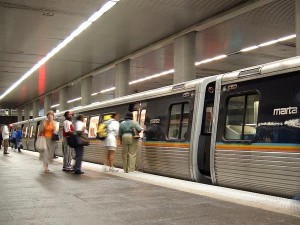 MARTA buses have been rolling in Clayton County since March, but what the county really wants is commuter rail.

The good news is that MARTA is working on it.

When Clayton County residents voted last November to join MARTA with a full penny sales tax, their ultimate goal was to be connected to Atlanta with commuter rail. MARTA has been holding constructive discussions with railway giant Norfolk Southern Corporation, which is a welcome change. When MARTA first started talking about commuter rail going to Clayton, Norfolk Southern openly questioned those plan ─ a move that could have killed the MARTA referendum.

Now the railroad and MARTA have reached an understanding, at least in principle. Norfolk Southern will not be sharing its existing tracks with any passenger service. But it is working with MARTA to study the possibility of adding a second set of parallel tracks within Norfolk Southern’s right-of-way.

Clayton Commission Chairman Jeff Turner said he was encouraged by that development. That means Norfolk Southern will be able to increase its freight traffic on its own tracks, and MARTA would have the exclusive use of a second set of tracks for passenger service. MARTA would build passing tracks along the way to allow for two-way travel throughout the day.

There is still much work to be done.

MARTA and its consultants will need to conduct engineering studies and an analysis on what transportation mode would be best for the corridor; heavy rail, light rail or bus rapid transit.

Before making a final decision, MARTA plans to work with an advisory group of Clayton leaders to get their input. Chairman Turner said all options are on the table, but the expectation in Clayton is that they will end up with rail service rather than bus.

In order to build and operate a commuter rail line, MARTA officials have said they would need to receive about 50 percent federal funding. It is premature to know how much a commuter rail line within Norfolk Southern’s right-of-way will cost.  It could take as many as seven to 10 years before commuter rail service begins.

But we’re off to a good start.

Norfolk Southern and MARTA seem to be working together, rather than at cross purposes. And most importantly, Clayton provides a template of what could happen in other counties ─ say Gwinnett or Cobb ─ if they decided to join MARTA.

That’s why it is so important to the Atlanta region for the MARTA-Clayton partnership to succeed.