MARTA plans to honor in art four leaders of the civil rights movement – a new piece of Congressman John Lewis, the Rev. Joseph Lowery and the Rev. C.T. Vivian; and a mural event for H.E. Holmes. 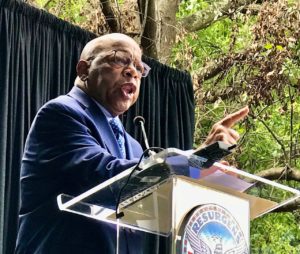 MARTA intends to honor Congressman John Lewis by including him in a mural with two other civil rights icons, the Rev. Joseph E. Lowery and the Rev. C.T. Vivian. Credit: Kelly Jordan

MARTA is collaborating with the Hammonds House Museum to commission a new artwork of Lewis, Lowery and Vivian. Each died in 2020.

MARTA is collaborating with the Center for Civil and Human Rights on the H.E. Holmes Mural Event. A date was not announced. Holmes and journalist Charlayne Hunter-Gault were the first Black students to enroll in the University of Georgia, in 1961.

The three men who are to be portrayed together performed instrumental roles in developing transit in metro Atlanta, according to MARTA’s Collie Greenwood, chief of bus operations. Greenwood addressed Monday’s meeting of the Atlanta City Council’s Transportation Committee. 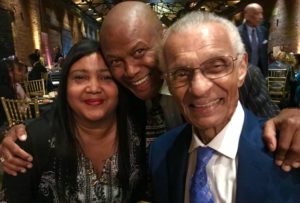 “We will curate artwork to commemorate the three Atlanta civil rights giants, pictured in the photo, who passed away in 2020, all of whom made very important contributions to MARTA,” Greenwood said, referring to a photo of the three men together.

Greenwood began his presentation with a nod to the funding source, MARTA’s Artbound program. The program provides up to 1 percent of eligible capital funds for three types of art – performing, visual, and the conservation of 35 legacy artworks at MARTA stations.

“Art is a worthy investment in what makes us human,” Greenwood said. “It nourishes our send of wonder and supports economic engagement for local artists.

Greenwood named a few highlights of the contributions to MARTA from each of the three civil rights leaders who are to appear in the one mural: 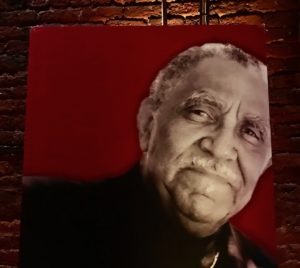 A portrait of the Rev. Joseph E. Lowery on display during his 98th birthday celebration at the Georgia Freight Depot. Credit: Kelly Jordan

The process of selecting an artist begins with the selection of six artists who will be invited to propose designs. The finalist is to be chosen by MARTA and advisors from the Hammonds House.

The collaboration with Hammonds House adds a significant perspective to the selection of the artist and the vision the work presents. The museum’s foundation is the former home and collection of Dr. Otis Thrash Hammonds, which Fulton County purchased in 1985 under the leadership of then-Chairman Michael Lomax, a longtime promoter of the arts. 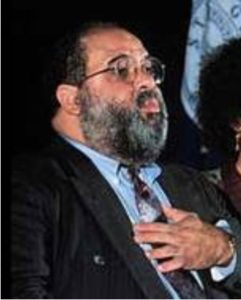 The museum’s remains vibrant during the pandemic. The current exhibit, Elements of a Revolution, explores issues related to social justice and equity. On Thursday, pianist Eric Reed appeared in the museum’s streaming series, Conversations About Jazz and Other Distractions with Carl Anthony.

Holmes is to be honored in an event sponsored in partnership with the National Center for Civil and Human Rights.

Plans call for the event to include a mural of Holmes; a collection of educational panels provided by the center; and a commemorative event with Holmes’ family members.

MARTA has recognized Holmes with the naming of the station at the current terminus of the Blue Line. The station is one of MARTA’s busiest, serving as a transfer station for MARTA and regional bus service. The station also offers MARTA’s Fresh Market concept, which provides fresh, locally grown produce.

Previous Article
Reporter’s Notebook: Awards for some, new jobs for others
Next Article
Woodruff Foundation grants $90 million to Children’s-Emory for pediatric research