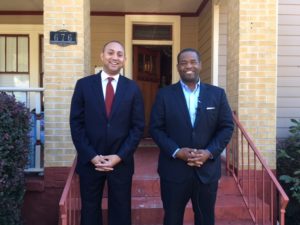 Mitchell called it an “incredible boost” for his campaign, as the two men made the announcement in a press conference at Mitchell’s West End House on Tuesday.

“I think it’s a consolidation around a vision of the city, a city where leadership matters, a city where having a real track record to run on matters and a city where temperament matters,” said Mitchell, who’s the current City Council president.

“It’s important to note that I am, and make no bones about it, the only Democrat who can win this race,” said Mitchell.

Sterling said he considered all the candidates for his endorsement once he and his team saw their own path to victory closing. He said he went with Mitchell because, as he put it, the Council president shares his values and commitment to a better Atlanta. He also said he thinks Mitchell can win.

Reed has thrown his support behind Atlanta City Councilwoman Keisha Lance Bottoms, who has recently polled second to frontrunner Councilwoman Mary Norwood. Indeed, the race right now is seen something of a contest for second place and a move to an almost certain runoff, likely with Norwood. There are 12 candidates who are printed on Atlanta’s mayoral ballot, but only eight are counted in most polls.

Sterling has lagged behind most other candidates in fundraising and has not even been offered as a choice in all the mayoral polls. But he is the first major candidate to suspend their campaign and endorse a competitor.

Sterling said he and his team feel their message has resonated but that they do not see a path to victory. He said that outreach to younger voters using non-traditional means didn’t work out as well as his campaign had calculated and they were missing fundraising goals.

Mitchell has reported raising more than $2 million for the mayoral election but has struggled to break into the double digits in polls.