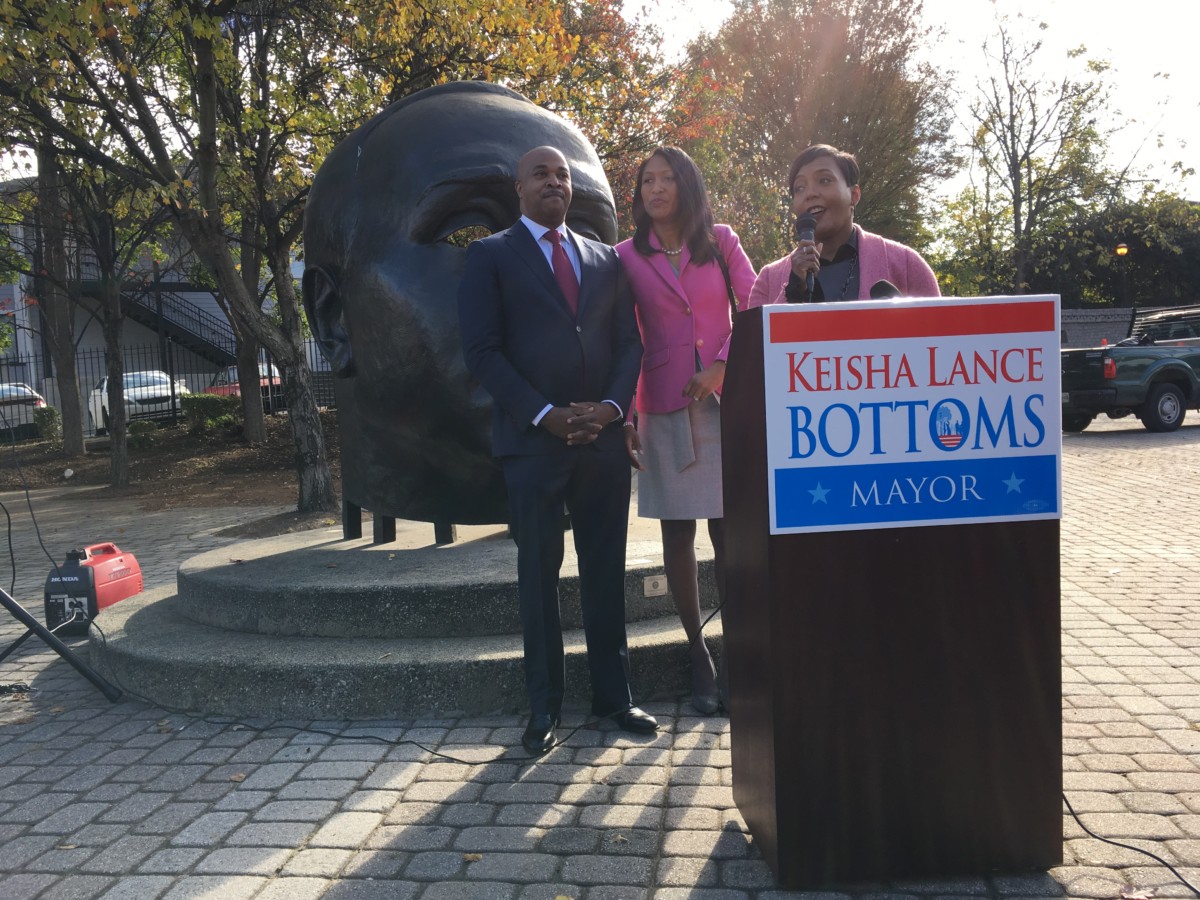 One of Keisha Lance Bottoms’ former competitors in the mayor’s race now says he’s endorsing her.

“Addressing of inequality as well as addressing the issues that bring families and children out of poverty, out of the margins and into the mainstream of our city — that’s going to be the biggest challenge that we have going forward. There were some great people who ran … for mayor, but the two that prevailed, they’re really, really good individuals. But the finest of the two is the one standing right next to me. She is no other than Keisha Lance Bottoms,” said Hall. 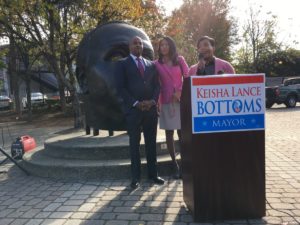 He made the comments at a press conference on John Wesley Dobbs Plaza on Auburn Avenue on Tuesday morning, along with his wife Natalie Hall, a candidate for Fulton County Commission.

Bottoms and Kwanza Hall have been City Council colleagues for eight years.

“Kwanza in many ways has really led my thinking and helped me formulate policy that’s helped transform the community that I’ve represented for the last eight years,” said Bottoms. She represents much of southwest Atlanta on either side of Interstate 285, including Cascade, Adams Park and Greenbriar.

She said her Invest in Southwest initiative — which is meant to help generate economic opportunities in her district — was inspired in part by what she saw Kwanza Hall did in Old Fourth Ward.

Kwanza Hall finished with four percent of votes in the first round of mayoral voting last Tuesday. That put him seventh in a field of 10.

But his home base is the east side, in a district that includes Little Five Points, Old Fourth Ward, Boulevard and parts of Midtown and Downtown.

So he could bring votes in an area of town where third-place finisher Cathy Woolard often outpaced other candidates — it’s starkly visible on a map.

Kwanza Hall said there are at least three Atlantas: a north side, a south side and an east side.

District 2, he said, is very diverse: old folks and young ones, residents who are from the LGBTQ+ community, who are wealthy, poor, white, African-American, empty-nesters, people who just arrived and people who have lived there a long time.

“I think we know where the city generally is going to break along racial and I guess geographic lines but the intown vote is up for grabs. They know that they want a smart leader, a leader who’s committed to communities and neighborhoods, but one who also has a track record for getting things done,” said Kwanza Hall.

So far, none of the other frontrunners have yet to endorse Bottoms or Mary Norwood, the two candidates who are now in a mayoral runoff after first-round voting last Tuesday.

Woolard said she intends to hold a public conversation with Bottoms and Norwood. The place and time have yet to be announced.