Atlanta, the city in the forest. (Photo by Hannah E. Jones.)

Atlanta’s parks — tucked away amid a bustling city and expansive metro area — are one of its crowning jewels and many elected officials, local partners and community advocates are dedicated to expanding one of the city’s greatest treasures. 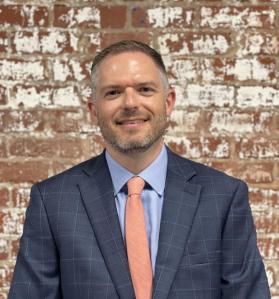 Justin Cutler. (Photo courtesy of the City of Atlanta.)

One of those people is Justin Cutler, Atlanta’s new Parks and Recreation commissioner.

He most recently served as the City of Seattle’s Director of Recreation Services, stepping into his new role on Aug. 1. In his new position, Cutler oversees the Department of Parks and Recreation, helping create long-term plans for bettering the city’s parks while collaborating with the mayor and city council to achieve those goals.

Atlanta has 445 parks, according to the Trust for Public Land (TPL), and 77 percent of residents live within a 10-minute walk to one. For context, the national average is 55 percent. Atlanta is on the right track, but there is still work to be done.

Earlier this year, the city was ranked number 27 on TPL’s 2022 ParkScore index, a comprehensive rating system designed to measure how well the 100 largest U.S. cities meet the need for parks. Atlanta sat at number 49 last year, but thanks to recent improvements in park access and increased investment, the city jumped 22 spots within the past year — improving the most in rankings of any city on the list. In September, the department also earned the CAPRA accreditation, putting it among the elite park and recreation agencies in the U.S.

In June, Cutler visited to apply for the new role and, upon arriving, he was struck by the area’s expansive tree canopy and “how integrated nature is into Atlanta.”

As he becomes better acquainted with the city and has conversations with Mayor Andre Dickens and other leaders, Cutler is proud of the city’s significant partnerships and investments in local parks. According to TPL’s 2022 ParkScore, the city and local partners invested $206 per capita in nearby parks, among the highest on the nationwide index.

“[The investment] means that the community wants to see services. That investment is inspiring to me and our team because it means people are at the table, they want to be involved and they want to help Parks and Recreation succeed,” Cutler said. “That gets back to the mayor’s idea of how do we draw circles? How do we build a bigger pie and not fight over an ever-shrinking pie?” 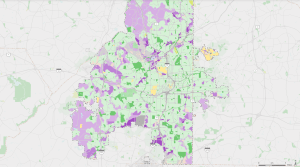 A breakdown of park access in Atlanta. The purple blocks represent high priority areas for parks, with the darkest sections being the highest priority. (Map courtesy of the Trust for Public Land, 2022 ParkScore.)

To address the disparity, the department will launch an equity data tool to identify parts of the community that are farthest from access and opportunity and work with partners to identify potential funding, land acquisitions or joint-use agreements. The tool is expected to be released in November, along with several public information meetings.

“We have 23 percent of our community that needs additional park space. This is all over Atlanta,” Cutler said. “We’ll use the data and work with partners to identify where we need new parks and make sure they’re high-quality parks [including] a playground, a walking path and a sports field. Just having a spot with a bench and a swing set is not a complete park.”

Cutler also wants to harness the power of Atlanta’s officials, local partners and community leaders to fill each park with life, using those spaces to strengthen our communities. He referred to the Power of 10+, a concept that for a truly thriving public space, visitors must have at least 10 reasons to be there. To do this, the city has rolled out two new community events with the Atlanta Police Department — “Popsicles in the Park” and “Movies in the Park.”

“We know parks are safe when they’re activated,” Cutler said. “With that positive activity, the negative activity tends to go to other places. It’s our job as Parks and Recreation professionals to make sure that parks are activated and activated in partnership with the community.”

When measuring success for his tenure, Cutler hopes the results speak for themselves. Over the next few years, he pictures an ever-increasingly green Atlanta and a 10-minute stroll to a park for every resident.

“It’s about working towards excellence, increasing the acres within our park system and having high-quality recreation services and recreation opportunities,” Cutler said. “The Mayor has committed to a 10-minute walk for all neighbors to access a park, so it’s also about looking for creative ways to increase access and opportunity.”