The new Westside Park — now Atlanta's largest park — is noted as a top contributor to the city's improved ParkScore. (Photo by Kelly Jordan)

The City of Atlanta has secured its spot as number 27 on the 2022 ParkScore Index from The Trust for Public Land (TPL). Atlanta sat at number 49 last year, but thanks to recent improvements in park access and increased investment, the city jumped 22 spots within the past year. Atlanta improved the most in rankings of any city on the list.

The annual ParkScore is a nationwide, comprehensive rating system designed to measure how well the 100 largest U.S. cities meet the need for parks. TPL’s overarching goal is to ensure everyone has a park within a 10-minute walk from their home.

The 100 top cities’ ranking is determined by several criteria, including access, acreage, investment, amenities and equity.

Atlanta boosted its access by adding two new parks to the mix, Westside Park — the city’s largest park — and Cook Park in Vine City. City officials and local nonprofits were also dedicated to upping investment, spending $206 per person on parks compared to the national ParkScore average of $98.

Local leaders are celebrating this win for parks in Atlanta.

In addition to pursuing new parks, Halicki added that now is the time to focus on the details, like park maintenance and the city’s neighborhood parks.

With the recent investments in local outdoor spaces, 77 percent of Atlanta residents now live within a 10-minute walk of a park, compared to last year’s 72 percent. The 100-ranked ParkScore median comes in at 75 percent. 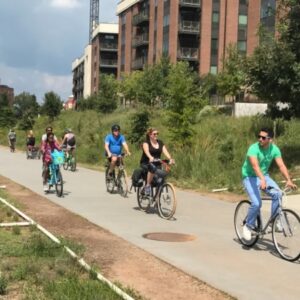 “Twenty years ago, there was no Atlanta BeltLine,” Dusenbury said. “Now, people come in from other cities and they study the BeltLine.” (Photo by David Pendered)

TPL’s Georgia Director George Dusenbury gives kudos to the Atlanta BeltLine — which is included in the ParkScore — for helping energize and prioritize outdoor space in the city.

“[The BeltLine] has been a game-changer to the parks conversation,” Dusenbury said. “Not just for the trail itself and the signature parks, but it also really has gotten Atlantans to expect more of parks.”

The Conservation Fund, the land acquisition partner with the city, has been a major player in securing land for the BeltLine. The team was also instrumental in acquiring the 216-acre Lake Charlotte Nature Preserve in Southeast Atlanta, which serves as a cornerstone of the South River Forest.

Dusenbury and Halicki also gave a special shout-out to the city’s Department of Parks and Recreation and Atlanta Watershed Management for the departments’ dedication to creating and preserving parks.

While investment in outdoor spaces is high, the city’s ParkScore is hindered by the limited size of its parks. Atlanta is home to 447 parks, yet only six percent of city land is used for parks and recreation. In comparison, D.C. — the top-ranked city for two years in a row — has reserved 24 percent of city land for parks.

But with new initiatives in the pipeline like the South River Forest, the Chattahoochee RiverLands and TPL’s Community Schoolyards project, the city will soon see increased acreage dedicated to parks.

Park Pride has also recently announced $2.3 million in grants that will support local park improvements, with 60 percent of the funds going to parks in low-income neighborhoods.

When it comes to equity and parks, Halicki believes the two can work together rather than against each other.

“I think the elephant in the room is that parks can be something that are a threat to existing residents,” he said. “As we look at the publicly owned land, it’s not a choice between affordable housing and parks and greenspace, it’s ‘How do we get both of them?’ If we’re really smart about it, we can integrate the two and have them happen simultaneously.”

And with Mayor Andre Dickens’ dedication to parks and greenspaces, along with his newly-created Greenspace Advisory Council, the city will likely see more improvements to local parks and outdoor access over the next few years.

“Atlanta is a city in a forest, and as Mayor, I’m committed to making sure that every resident has access to our beautiful greenspaces — regardless of zip code,” Dickens said in a press release. “While I’m proud of the work we’ve done to achieve this ranking, we’re not done yet. I’m excited that we’re continuing to add park space to our city, including building our first-ever park on the Chattahoochee River. Make room for Atlanta at the top, where we belong.”

If you’re interested in a more in-depth look at the city’s park access, click here to check out TPL’s interactive map highlighting Atlanta’s parks, the environmental impact and which neighborhoods need more access to the outdoors.