Myron Fountain, who works as a mentor under the moniker "Prison Dr."

The Buckhead City Committee‘s extraordinary proposal to give or raise $1.25 million to a program for at-risk youths would benefit a one-man operation that began relatively recently.

Myron Fountain (often spelled as “Fountaine”), who calls himself the “Prison Dr.,” is a former armed robber turned youth mentor whose nonprofit has been registered in metro Atlanta for about 14 months. Fountain says that funding pledges from BCC leader Bill White would mean the world to his efforts and that, while featured in a press conference from the organization, he is not interested in cityhood politicking.

“I’m not a political person. I’m a 501(c)3,” he said in a phone interview. “I don’t give a damn about people’s opinion about the mayor or legislators or Bill White. I care about the kids.”

Indeed, Fountain said, he also spoke recently with new Mayor Andre Dickens, similarly about partnering on solutions to youth crime, in the unusual setting of the Outlaws motorcycle clubhouse during a fundraiser for families of crime victims. The Mayor’s Office and the motorcycle club did not immediately respond to comment requests.

The BCC announced in December that, as part of its approach to crime-fighting, it would raise $250,000 for Fountain’s nonprofit, and further pledged to donate $1 million from the startup budget of the new Buckhead City if incorporation happens. However, the BCC did not respond to questions about the status and method of that fundraising or about how the $1 million can be pledged without knowing a future city’s procurement processes, leadership priorities and similar issues.

White, the BCC’s chairman and CEO, is a professional fundraiser with a high-profile background in working with presidential candidates, among others. White’s background also includes involvement in questionable fundraising, including a 2010 scandal involving New York state pension funds where he agreed to pay $1 million and undertake other actions in response to a state Attorney General investigation. 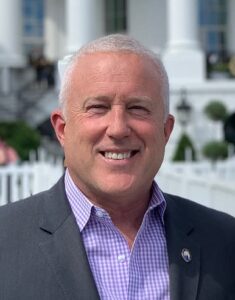 Bill White, chairman and CEO of the Buckhead City Committee.

“I don’t know about that,” Fountain said, raising White’s New York past. He emphasized his personal knowledge of White, whom he met with one-on-one at Buckhead’s OK Cafe ahead of the fundraising pledges. He praised White as a person, including for anonymous donations.

“I don’t want to get into the fight back and forth [about cityhood]. I’m not gonna throw shade on him,” Fountain said of White. “He has been nothing but a good person. I have watched this man give money anonymously to other people and Black families… families struggling in the hood, and say, ‘Don’t say this money came from me.'”

Shortly after SaportaReport’s initial interview with Fountain, White generated controversy with racially themed social media posts, one calling Dickens a “racist” and one retweeting a white nationalist affiliated website’s commentary attributing Atlanta’s murder rate to its Black population. Asked about those controversies, Fountain indicated they did not affect his willingness to be involved with the BCC. “Regarding Bill White, I support his efforts to create pathways and ladders for Atlanta’s at-risk youth,” he said.

Fountain’s nonprofit is not currently registered with the state as a charity and doesn’t have to be unless it raises over $25,000, according to the Georgia Secretary of State’s office. The office also said the BCC would need a solicitor license if it were taking a fee for aiding the Prison Dr. fundraising.

From prison to ‘Prison Dr.’

The “Prison Dr.,” Fountain drives a police-style car bearing his face inside a badge icon and wears a physician-style white coat. He makes house calls on youths, where he brings a tough-love approach about the need for discipline and warnings about the example of his own life, which included a 20-year prison sentence.

A Detroit native, Fountain says he is a son of Eli Fountain, a noted session saxophonist for the Motown record label. Fountain often adds an “e” to the end of his name — including on his white coat — which he says is a tribute to his father, who sometimes did the same as a stage name.

Fountain says he doesn’t blame his background for his earlier life of crime, because “quite frankly, I was spoiled. I came from a great family.” His story of where things went wrong focused on his 1990 conviction, at age 19, for armed robbery in the theft of a car. But he acknowledged the accuracy of Michigan court records showing prior convictions over the previous four years for such offenses as armed robbery, assault with a dangerous weapon, receiving stolen property and carrying a concealed weapon.

“It cost my butt over 20 years in prison,” he said of the car robbery. “I went in prison knowing I didn’t belong there.”

He said he took advantage of every self-help class and sharpened previous martial arts skills, which he has parlayed into work as a self-defense instructor and a certified trainer.

Fountain says he made the move to Georgia for “a second chance, to be honest.” He said he heard Atlanta was “progressive” and a good place to be entrepreneurial. He also liked the idea of “Southern hospitality” and more greenery than Detroit. He says it’s working out — he fell in love and started a family; they now live in Lawrenceville.

Asked about similarities between Detroit and Atlanta in terms of his mentoring, Fountain cited the income inequality. “The gap between the wealthy and the poor is huge. And it hits our kids, especially in our inner cities, especially in our African American communities, quite frankly,” he said. A more equal system is needed, he said, “where money is not just flowing upstream, but downstream.”

But when it comes to youth crime, Fountain also focuses on parents. “The parents are just totally failing in their duty as parents,” he says. His “raw” message when dealing with families is about parental and personal responsibility. He’s concerned about single-parent households and kids hearing “music that speaks about degrading women and materialism over their own life.”

“I bite no tongue when I say this is a spiritual thing for me,” said Fountain, adding he believes God has “anointed me” and “blessed me on my journey and all the horrible things I’ve experienced.”

“I think the problem is, most mentors and most parents quite frequently don’t speak about God, whether its Islam or Christian,” he said. “They need something that holds them accountable for their actions that’s bigger than them.”

Back in Detroit, he said, he mentored around 300 youths and still hears from many of them about his assistance. In metro Atlanta, he says, he has met about 100 youths.

If the BCC money came through, Fountain said, “It would mean everything. When you’re starting from zero, a dime helps… Right now I’ve been doing literally everything out of my pocket, my own personal funds.”

The particular mentoring need that got Fountain involved with the BCC is the so-called water boys, meaning children or young adults who sell bottled water on the streets to passers-by without a license. Water-selling became a hot-button crime issue last year as some used aggressive tactics or pulled guns in turf battles. Former Mayor Keisha Lance Bottoms urged tolerance while working on other ways to direct the young people’s entrepreneurship. Meanwhile, the commander of the Atlanta Police Department’s Buckhead-area Zone 2 precinct chose to ignore that policy and institute a crackdown that pushed some of the water-sellers out later in the year. 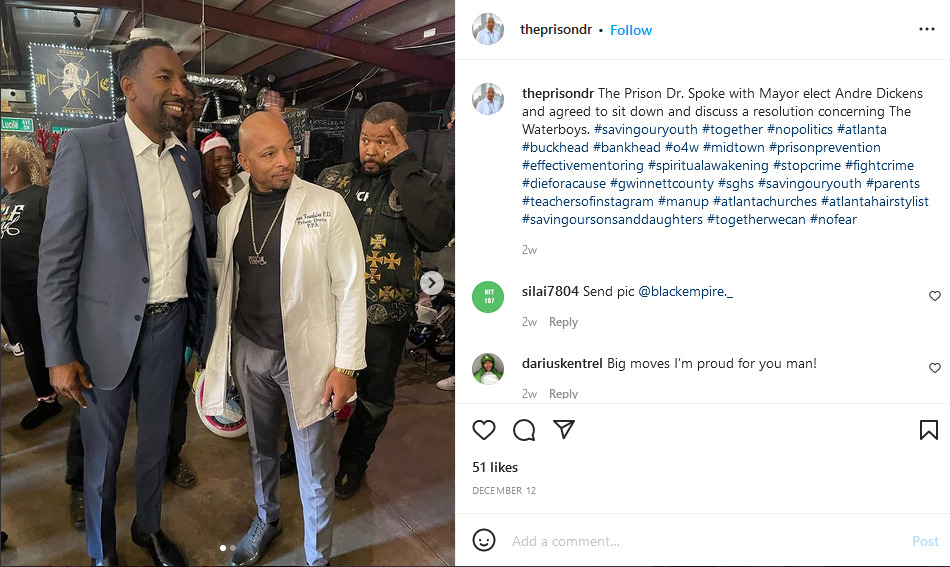 An Instagram post from Fountain showing him with Mayor Andre Dickens at what he said was a recent fundraiser for crime victims’ families at a motorcycle club.

Bottoms created an advisory council on the issue that produced a carrot-and-stick approach that continued to include enforcement but focused on alternative programs that could entice the sellers with similar pay — $100 to $300 a day. The “Buckhead Security Plan” developed by the Buckhead Coalition, Buckhead Community Improvement District and other organizations late that year had some similar aspects of zero-tolerance policing and a boost to youth programming.

The BCC has announced its own plan, attempting to position cityhood as a better answer and pledging to offer a mix of police crackdown and Fountain’s mentorship and entrepreneurship programs. On Dec. 9, the BCC held a press conference featuring Fountain and Jalanni Pless, whose 18-year-old son was killed in 2020 while selling water, reportedly in a turf dispute with another seller.

Fountain said he is not familiar with the details of Bottoms’ plan on the issue, but expressed frustration with the lack of a hands-on approach. He said most of the water-sellers are “good kids,” but it is impossible to tell them apart from troublemakers, so authorities should have cracked down. “The adults are the ones who are supposed to be in charge and saying, ‘No, this is not what you’re gonna do,” he said.

He also questioned the role of parents in a situation “where now kids are on the streets selling water to try to survive. A kid’s role isn’t to survive. That’s the parents’ jobs.”

Fountain said he met White through social media, leading the BCC involvement. Fountain also spoke positively of the motorcycle club meeting with Dickens, claiming the new mayor knew of his work and say they “agreed when he’s in office, we will sit down and come up with something on water boys.” Dickens earlier this month convened a summit of youth service nonprofits at City Hall.

Speaking shortly before Dickens’ inauguration while Bottoms was still in office, Fountain emphasized that his interest is focused on helping youths in a hands-on way, regardless of who does it.

Share
Tweet
Share
Pin
Pocket
WhatsApp
Buffer4
Email
Reddit
4 Shares
Tags:
Previous Article
Not all the bills in the legislature are primed to the election year, but lots are
Next Article
Atlanta public corruption trials to begin after four years, Trump-related turnover of prosecutors