A message made for Trump Country, lost in the stampede 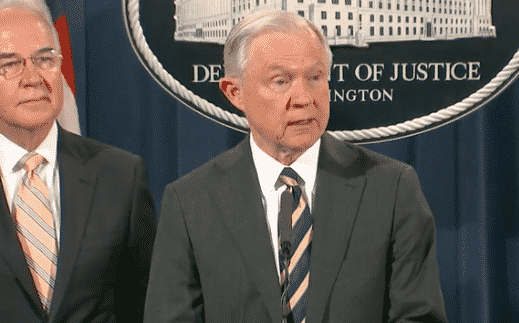 Last week the Trump administration did something right. You may very well have missed this.

In a press conference Thursday, Attorney General Jeff Sessions and Health and Human Services Secretary Tom Price announced  that the government has charged 415 defendants, including 115 medical professionals, for about $1.3 billion in false billings to government healthcare programs. More than 120 of the defendants were charged with prescribing and distributing opioids and other narcotics.

“In some cases, we had addicts packed into standing-room-only waiting rooms, waiting for those prescriptions… Some doctors wrote out more prescriptions for controlled substances in one month than entire hospitals were writing,” acting FBI director Andrew McCabe said of the cases investigated in the crackdown.

Sessions promised there would be more prosecutions in the fight against opioid abuse, and called for an overall reduction in the prescription of opioids by doctors.

A skeptic might want to know what kind of fraud the majority of defendants who weren’t involved in opioid abuse were practicing, and how that $1.3 billion broke down among the different kinds of fraud cases. None of this was discussed at the press conference. You’d like to know how much more fraud there is out there, how much of it comes from straight-out pill mills and how much fits seamlessly into the healthcare system. It’s worth noting also that the Medicare Fraud Strike Force, which brought these prosecutions, prosecuted 301 people and uncovered $900 million in fraud the previous year.

Speaking only of political messaging, however, this should have been a slam dunk for this administration, which has never hesitated to take credit for programs it inherited. This was a much better news peg than the me-too panel appointed to study the opioid crisis, headed by New Jersey Gov. Chris Christie. This was real action the administration could point to.

The crackdown speaks in a direct way to two of the defining issues of Trump Country: The opioid crisis, which has transformed much of rural, white America into something like 19th-Century China, and the increasing cost and scarcity of healthcare in these areas. It speaks to another, less frequently articulated issue as well: a more global distrust of the nation’s medical establishment which among some is as deep the distrust for the political establishment. Looking at local stories from around the country, the indictments include a lot of names that sound Asian, Middle Eastern or African, which for this administration would only have enhanced its promotional value.

Yet for all that, this story didn’t get a lot of bounce. Blame the lamestream media for the lack of interest if you wish, but the press conference got a lot of next-day coverage in major papers and on the network shows. It was that other media that ignored it, and therefore the story didn’t get any traction.

By the one standard that matters in this administration, the crackdown fell far short of the U.S. Women’s Open golf tournament. It didn’t get a presidential tweet. The White House press operation, which rolls out new “themes” at the rate of a few a week, paid the crackdown scant attention.

President Trump is reported to be still miffed at Sessions for his decision to recuse himself from the investigation into Russian meddling in the 2016 election, so maybe that’s why he missed the potential for this story. That would fit with the daily storyline of a White House endlessly divided against itself. The Trump campaign was highly effective in delivering a message with essentially one messenger. The Trump administration seems never to have learned how to communicate that message through a network of voices.

One reason the press conference didn’t get more notice, you may remember, is that by the next morning at least two new people were being reported to have been in the room during that June meeting involving a Russian lawyer, Donald Trump Jr., Jared Kushner and Paul Manafort. You can’t critique the administration’s messaging very much, when the message is being trampled by a stampede on a daily basis.

When questions were asked about funding for opioid treatment at the press conference last week, Price said that the administration is deeply committed to the issue. He and presidential advisor Kellyanne Conway have been out on the road together talking about the administration’s plan to combat opioid abuse, which may be a sign of White House involvement. Or, maybe not.