Deisha Barnett, the senior branding executive with the Metro Atlanta Chamber for nearly five years, will be leaving May 21 to join UPS as its vice president of strategic communications.

Katie Kirkpatrick, president of the Metro Atlanta Chamber, sent out an email Monday to her team making the announcement. Barnett also has been serving as the Chamber’s head of diversity, inclusion and equity.

“Deisha has been a valuable member of our senior leadership team who has shown true dedication and commitment to MAC’s mission,” Kirkpatrick wrote in the announcement. “We have relied on her strategic counsel, business-savvy and deep love for Atlanta – and her impact extends far beyond any one initiative.” 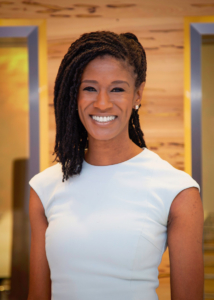 Kirkpatrick said Barnett has transformed the Chamber’s approach to promoting the region.

“Under her leadership, we launched the ATL Brand Box to create ambassadors for metro Atlanta ahead of Super Bowl LIII, relaunched ChooseATL with a clear call to action for Gen Z, and saw a data-driven approach to Atlanta’s storytelling increase buzz across social media and traditional news outlets,” Kirkpatrick said.

Barnett also was credited by Kirkpatrick for guiding the Chamber’s response during “times that have challenged the Atlanta brand,” and for being “an important thought partner as our Public Policy team navigates complex issues.”

“From the moment she came to MAC, Deisha has been a passionate advocate for diversity, equity and inclusion,” Kirkpatrick said. “In 2020, she became our first head of DEI and laid the strategic foundation for this priority at MAC, including our internal DEI Working Group, the DEI Roundtable and the ATL Action for Racial Equity – efforts we will continue to prioritize over the months and years ahead.”

The Chamber is launching a search for a new chief brand and communications officer. In the interim, the brand communications team will report to Dan Corso, president of the Atlanta Sports Council. Also Marshall Guest, senior vice president of public policy and business climate, will serve as a strategic advisor.

For Barnett, joining UPS will be a return to the corporate sector. She was recruited to join the Chamber by then President Hala Moddelmog after serving for nearly 10 years at Walmart, working in various positions for the retailer’s global corporate communications division.

In September 2020, Barnett was appointed to the board of skincare brand Urban Skin Rx. She also serves on the executive advisory council for the University of Georgia Grady College of Journalism and Mass Communications, on the board of the Atlanta Press Club and on the board of Next Gen Men & Women.

Barnett first became enamored with Atlanta in 1993 when she came here from New Jersey to go on a college tour of several schools, including Atlanta’s Historically Black Colleges and Universities as well as Georgia Tech and Georgia State University. She ended up attending Clark Atlanta University, receiving her Bachelor of Arts in Mass Communications with a concentration in public relations in 2000.

“There is no better place in America to be Black, raise Black children or be Black in corporate America,” Barnett wrote in a text. “I am the leader I am today because of Atlanta.”