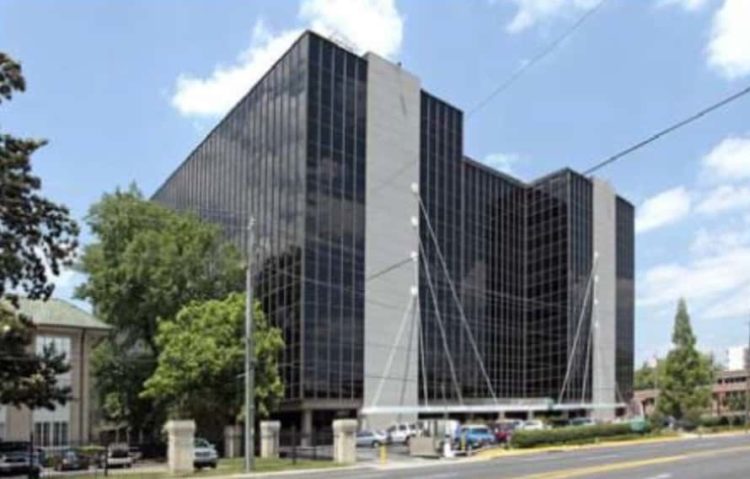 Peachtree 25th, an office building located at 1718 Peachtree St., has been Energy Star certified since 2009 and had an Energy Star rating of 93 in 2016, according to an index released by CBRE. Credit: atlantasublease.com

Metro Atlanta has climbed to third place on the fourth annual Green Building Adoption Index, an index led by CBRE, a real estate firm. But the big news appears in at the start of the executive summary – regarding the potential demise of the green building movement. 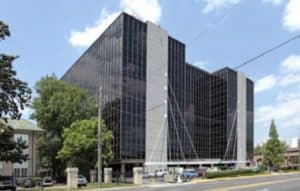 Peachtree 25th, an office building located at 1718 Peachtree St., has been Energy Star certified since 2009 and had an Energy Star rating of 93 in 2016, according to an index released by CBRE. Credit: atlantasublease.com

The executive summary of the index begins with this observation:

The comment relates to President Trump’s budget proposal for the U.S. Environmental Protection Agency. The proposed budget eliminates the Climate Protection Program, which houses the Energy Star Program and a host of other voluntary programs including Natural Gas Star, Landfill Methane Outreach Program, and the Responsible Appliance Disposal Program. Energy Star costs taxpayers $60 million a year, according to a report in latimes.com.

The proposed budget directs that legislation be drafted to transfer the Energy Star Program to an unidentified “non-governmental entity.” 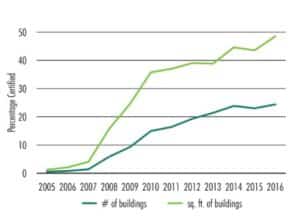 Building owners in metro Atlanta have a particular affiliation for the Energy Star Program, according to the index compiled by CBRE and Maastricht University, located in the Netherlands.

Of all the commercial space reviewed in metro Atlanta, 24.4 percent held an Energy Star label. That’s the second highest proportion in the nation, trailing only Manhattan, and nearly double the national average.

Overall, 55 percent of commercial properties in metro Atlanta hold either an Energy Star label or a LEED certification, according to the index.

Metro Atlanta’s climb from fifth to third place on the index “was likely aided” by the building performance ordinance the Atlanta City Council adopted in 2015. The ordinance requires commercial buildings, including multifamily residential buildings, which are at least 25,000 square feet to measure and publish their water and energy usage every year. The ordinance also requires an energy and water audit to be conducted every 10 years. The ordinance covers about 402 million square feet, according to the index. 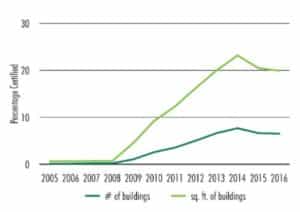 Metro Atlanta has embraced LEED certification at a rapid pace over the past 12 years. Credit: CBRE

“While it is still too early to make a definitive correlation between benchmarking ordinances and the rate of growth in ‘green’ buildings, this year’s findings do begin to establish a link that will be studied closely in the future,” David Pogue, CBRE’s director of corporate responsibility, said in a statement.

Regarding the fate of the green building movement, the index held out hope that the market will continue to embrace sustainable practices. The hope is based on the notion that building owners and tenants have come to expect that buildings will use less water and energy than their predecessors:

According to Marie Kastens, CBRE’s managing director of asset services, “We have seen first-hand the kind of impact an Energy Star Certified building with top amenities can have on its tenants. Notably, because of the community impact, energy management systems, energy efficiency procedures and other high-quality amenities, The Corners office park in Norcross has been honored with an international TOBY Award [The Outstanding Building of the Year] through the Building Owners and Managers Association.” 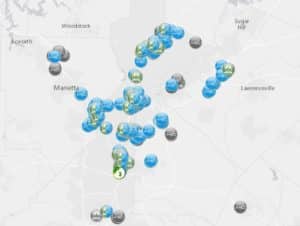 Metro Atlanta ranks third in the nation for the proportion of green commercial buildings. The structures that were reviewed flank Peachtree Street and Peachtree Road, and the region’s network of highways. Credit: CBRE