Blue indicates the 57 buildings in Midtown that have been delivered since 2010. Green indicates the 16 buildings that are currently under construction. The 10 buildings rendered in orange have cleared the development review process.

Since 2010, 57 new buildings have been delivered in the 1.2 square miles that is the Midtown Improvement District. Despite available parcels decreasing and the high price of land, momentum to build continues unabated. A study of 50 cities across the United States revealed that Midtown ranked No. 2 for recent apartment construction. This comes as no surprise as there are over 4,500 new units currently in construction — more than ever before.

Looking ahead, 10 new projects have cleared the Midtown development review process in the past year. December alone included three projects with a total of 117 new proposed building stories. Like development, public interest in these new projects is sky high. The Midtown Development Review Committee virtual meeting in November resulted in the largest ever viewing audience, bringing more of the public closer to the current events and vetting process surrounding land use in Atlanta. 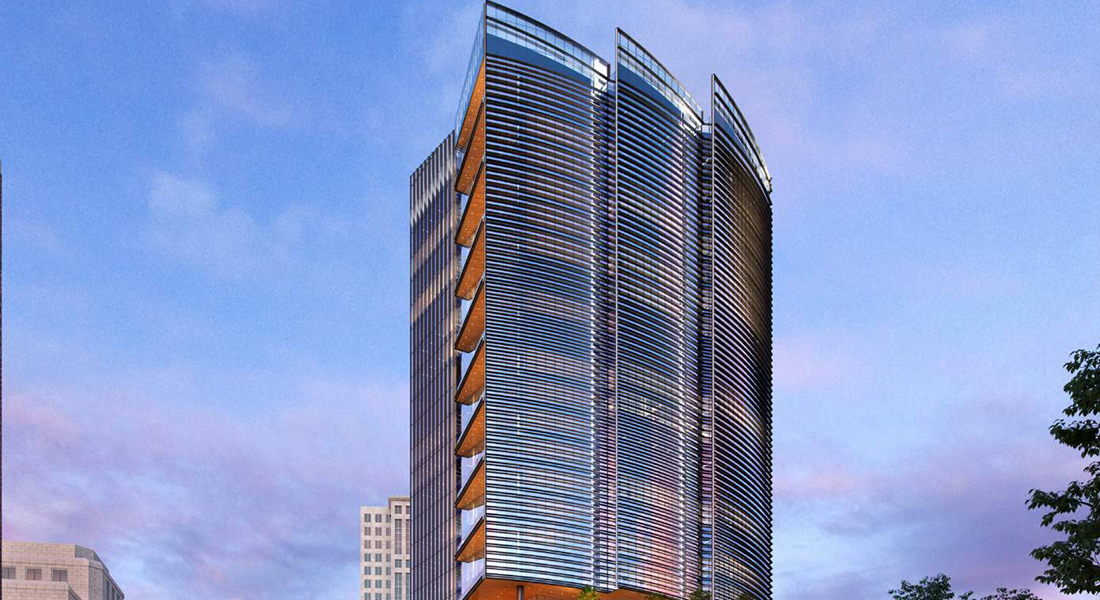 Stratus Midtown is a 30-story office tower proposed by Trammell Crow on Peachtree Place that will have large balconies built into multiple floors.

As with everything else, COVID-19 pandemic has impacted development. Notably, it has influenced the design and configuration of towers. Outdoor spaces to gather or meet have become a new necessity. Some of these outdoor spaces are on the ground, while others are up in the air. For example, Mill Creek’s Modera at 180 10th Street design suggests large common open-air rooms to overlook Piedmont Park. Trammell Crow’s 80 Peachtree Place project, known as “Stratus Midtown,” proposed to build large balconies into multiple floors of its office tower.  At 901 West Peachtree Street, Cousins Properties proposes a significant ground-level landscaped area for the benefit of future office and restaurant tenants. This was a successful formula for Georgia Tech and Portman’s Coda building who recently announced over 700 new jobs headed to Midtown from Cisco Systems.

Providing shared outdoor space is not necessarily new. But it’s clear there is a renewed focus for both new and existing buildings. Wherever possible, open-air plazas are slated to be enhanced on existing Midtown sites. Tower Square recently completed significant upgrades to its plaza across from the North Avenue MARTA Station. Further north near 15th Street, Cousins is actively enhancing outdoor areas at 1200 Peachtree St. and the Promenade building at 1230 Peachtree St. in conjunction with plaza work at  the street intersections. This has already paid off. Visa signed a long-term lease in September and has committed to creating 1,000 new jobs in Atlanta over the next few years.

Looking ahead with optimism to Atlanta’s post-pandemic future, we believe outdoor shared spaces like these will remain attractive and useful amenities for employers and employees. These types of privately owned, publicly accessible spaces are vital to the success of high-density urban districts like Midtown, where everything is more compact, and space is at a premium. Therefore, we are doubling our efforts with our public and private partners to improve and expand public spaces wherever we can. Under construction today is the Commercial Row Commons along Peachtree Place, the Art Walk on Peachtree Walk between 10th St. and 13th St. and continued enhancements at the 10th St. Park at the northeast corner of 10th & Peachtree St. Recently this site has installed a new sculpture and interactive photo art piece. Info on all these projects and more can be found here.

Creating these “places for people” is a big part of the original Blueprint Midtown and continues to be vitally important in our mission. This continued work has not gone unrecognized. Midtown Alliance’s community-driven master planning was recently awarded AIA Atlanta’s John Portman Visionary Award.

The award, in honor of late architect John Portman, FAIA, is given annually to demonstrate noteworthy achievements that express a vision and excellence of design. Midtown Alliance’s master plan, Blueprint Midtown, was chosen to receive the award because it has been the catalyst for new housing, desirable office space, transportation innovations, public safety initiatives, environmental cleanup, and a pedestrian-friendly platform for integrating retail, transit and parks.

The City of Atlanta and countless stakeholders have been involved in the Blueprint Midtown process since it began in 1997, and it takes all of us to realize this kind of long-range and large-scale transformation. Still more work remains to be done. Stay tuned for ways you can help in 2022 and beyond by subscribing to our newsletters.