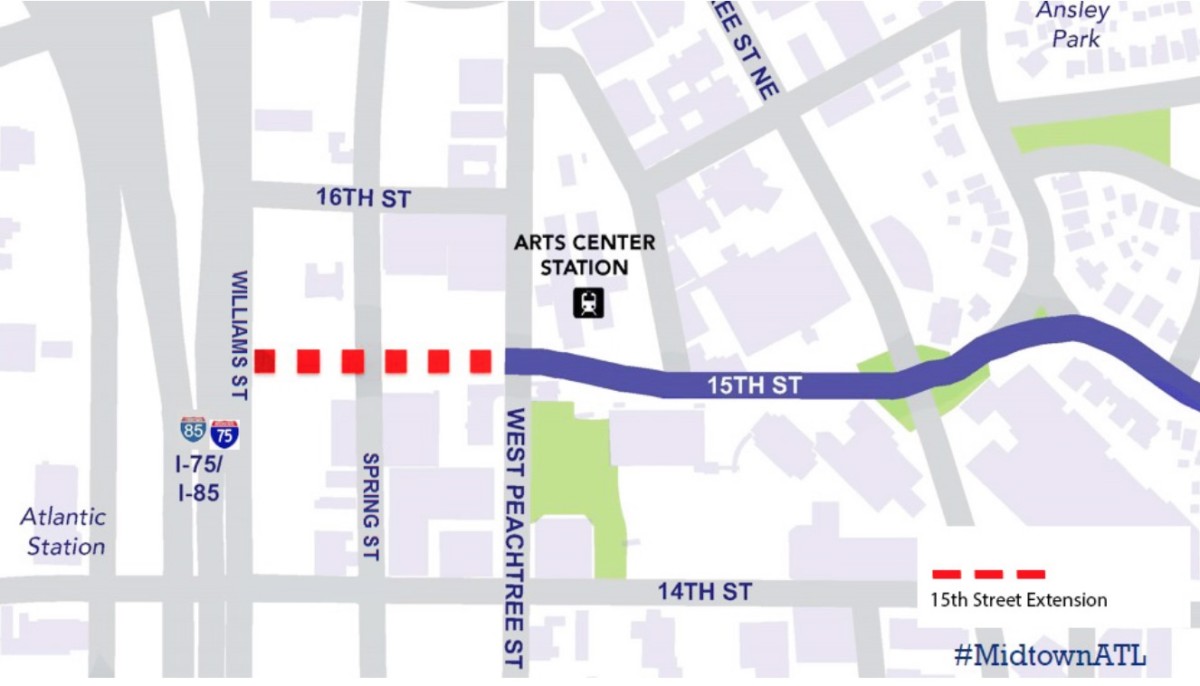 The public will have a chance next week to offer opinions on the long-awaited plan to improve east-west connectivity in Midtown by extending 15th Street from West Peachtree Street to Williams Street. Bike lanes and easy access to MARTA’s Arts Center Station, and other destinations, are cornerstones of the plan. 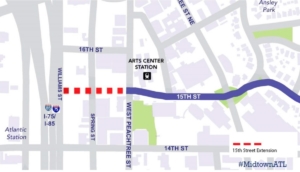 The 15th Street extension is expected to ease traffic congestion on 14th Street as it provides an alternative to reach destinations on the northern portion of Midtown. Credit: midtownatl.com

The plan has been years in the making and Kevin Green, CEO of Midtown Alliance, has described the project as a much-needed route that is to ease traffic congestion on 14th Street.

The project isn’t that long, at just a few blocks. Nor is it all that expensive for an urban project, an estimated $3.7 million. The project is to be built on land owned by the Georgia Department of Transportation, which has reduced costs and the time to acquire property, according to a report by Midtown Alliance.

But the project is significant for its potential to knit together a street grid in a northern section of Midtown that has a shortage of east-west connections. The dearth of east-west portals exacerbates frustrations among those traveling between the growing number of residential communities west of Howell Mill Road and the shops and offices east of the Downtown Connector.

The public information open house for the planned 15th Street extension project is set for Nov. 8, from 4 p.m. to 7 p.m. The location is 999 Peachtree St., the Midtown office building where Midtown Alliance is housed. The venue is the conference room on the 5th floor..

This is the description of the project provided in the report by Midtown Alliance: 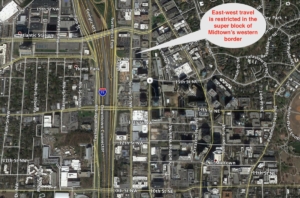 The official purpose of the meeting is to give the public a chance to review conceptual designs for the project and provide feedback to the design team. This typically means the public has a chance to drop in, take a look at designs presented on large display boards, and tell representatives of the design team their thoughts on the renderings.

The unofficial purpose is to celebrate years of efforts by Midtown Alliance and other supporters to create streets that are accepting of pedestrians and bicycles. It’s been within the past 20 years that the original plan for the 10th Street bridge over the Downtown Connector was far from welcoming to those crossing on foot or bicycle.

The modification of that original plan itself is being revised, with an eye to making it more accessible to those traveling by means other than a car. The project is being developed in conjunction with Midtown Alliance and the design/engineering phase is to begin in late 2019, according to a report by Midtown Alliance.

Note to readers: Alternate modes of travel to 999 Peachtree, and nearby attractions, are available on a profile of the building maintained by Midtown Alliance.