You don’t know how tempting it is to review “Mood Indigo” by simply listing all the visual delights Michel Gondry crams into his newest flight of fancy.

A Rubric Cube calendar. The pianocktail that allows you to compose a tune and concoct a cocktail at the same time. The doctor-prescribed treatment for a case of “water lily in the right lung” (very expensive). A tray of oven-baked snacks that come in tiny dollhouse ovens. A movable feast (literally).

Gondry has heaped his fantastical proclivities on American audiences for some time now. Some successfully (“Eternal Sunshine of the Spotless Mind”). Some less so (“The Science of Sleep.”) 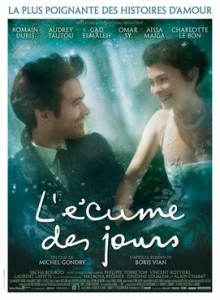 “Mood Indigo” is a romance along the lines of the memorable prologue to the animated hit, “Up.” Two people meet, fall in love, get married and, well, life happens.

Based on a cult novel written in the 1940s, the film is set in a charmingly surreal Paris. Colin (Romain Duris) is a wealthy young bachelor who lives in what looks like a posh Victorian train car suspended above the city (steampunk is very much the design of choice).

He is tended to by Nicolas (Omar Sy from “The Untouchables”). Officially his lawyer and financial advisor, Nicolas prefers to spend most his time as Colin’s chef.  His preparation of an eel dish (the eel comes out of a faucet, in full wiggle, and must be knocked out with tomatoes and mint) is an astonishing miniature fantasy all by itself.

Indeed he is. He’s in love with Nicolas’s sister. Colin wants to be in love, too.

Easier said and easier done in the world according to Gondry. At a party, he meets Chloe (Audrey Tautou, still “Amelie”-enchanting). Wedding bells soon follow, including a ceremony in which the priest intones, “Lord, may they be happy together and safe from family and work.”

Gondry summons several cinematic spirits as he tells his tale. Georges Melies, most notably, but also a touch of Marc Caro and Jean-Pierre Jeunot (“Delicatessen,” “The City of Lost Children”) or even Terry Gilliam.

However, as can be true in so many fantasy worlds, the sublime and the tragic bump up against each other without much in the way of preparation or buffer. “Mood Indigo” treads a fine line between childlike (wonder, imagination) and childish (abrupt, self-involved). Not everyone will be happy with where the film takes them.  But I can’t imagine anyone being disappointed in going along for the ride.