The nation’s colleges and universities face a new post-recession challenge in meeting their budgets, according to a report released Thursday by Moody’s Investors Service. 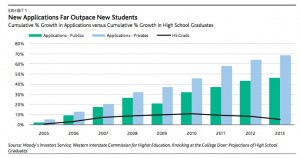 The black line shows the number of high school students, while the bars portray the number of college applications students file. Click on the image for a larger version. Credit: Moody’s Investors Service

High school students who apply to college are less likely than ever to enroll. That’s because students are applying to a record number of schools and then enrolling where they get the best deal. Schools left in the lurch run the risk of providing too many resources – teachers and classes and such – for the actual student body.

In July, Moody’s reaffirmed its dour outlook on U.S. colleges and universities, which Moody’s changed in 2013 to a negative outlook. Revenues of all types are depressed, from tuition and fees, to investment income, to state payments.

In this environment, the emerging X factor on the colleges’ bottom line is the phenomenon of students applying to more than five universities.

Evidently, the trend is too new for Moody’s to provide case studies. None are in the report. But the document does raise a warning flag as states, including Georgia, enter their budget cycles for the coming fiscal years and try to provide the sort of higher ed system that will raise the quality of life.

In ancient times, meaning before the recession of 2007, the majority of students applied to no more than four colleges or universities, according to the Moody’s report.

Schools knew how to program their resources in that environment.

The proportion of students who apply to five or more colleges has increased signficantly since 2008. Credit: Moody’s Investors Service

Since 2008, there’s been a steady increase in the proportion of students who apply at five or more schools, Moody’s found. And the increase is sharp: It grew from 45 percent to 55 percent in the five years ending in 2013.

Students are price shopping. They’re applying to as many schools as possible and seeing what sort of discount they are offered. Discounts are couched in terms called financial aid or scholarships.

Here are a few tidbits from the report: