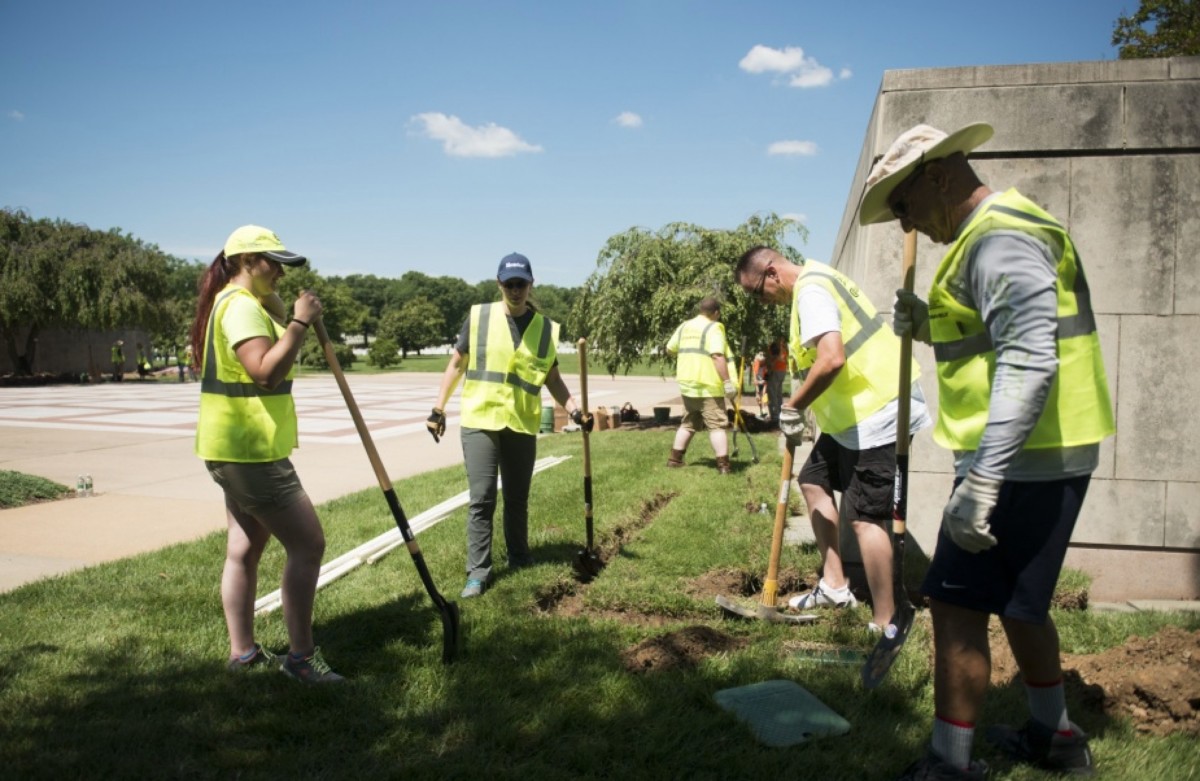 More than 200 Georgia companies have pledged to contribute resources to help meet community needs through the recently formed initiative, goBeyondProfit. For one Roswell company, their gift is helping to maintain Arlington National Cemetery. 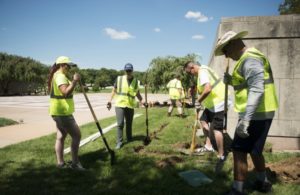 Roswell-based Southern Sprinklers pays the expenses for most employees and relatives of the owner, Edward Klaas, to repair sprinklers at Arlington National Cemetery. Credit: gobeyondprofit.org

For 15 years, Navy veteran Edward Klaas and his company, Southern Sprinklers, have paid the expenses of almost the entire staff and family to be part of the cemetery’s upkeep, a weeklong effort that is sponsored by the National Association of Landscape Professionals. Their gift is to repair the irrigation systems of the 624-acre cemetery, work that is beyond the resources of the Department of the Army, which has a small staff to maintain the cemetery.

This is the kind of corporate giving that might not gain much attention outside the company and recipient. It’s the kind of giving that Richard L. Jackson, chairman and CEO of Jackson Healthcare, thought should be celebrated as a way to encourage more companies to make contributions.

Jackson co-founded goBeyondProfit to serve as a platform by which companies could learn from each other about various ways to contribute to their communities. The platform also is to shine a spotlight on the good deeds and encourage more companies to participate.

The first spotlight appeared April 6, when goBeyondProfit took out a two-page ad in the Atlanta Business Chronicle to name the 200-plus participating companies. The wording in the ad was simple and direct:

Jackson, who has founded a number of companies, said goBeyondProfit is the result of national review of best practices for encouraging corporate giving. Jackson said key supporters included Frank Blake, former chairman and CEO of Home Depot; Eric Tanenblatt, a practice leader at Dentons; and Bernie Marcus, a co-founder of Home Depot.

“We decided to do a leader-to-leader initiative that’s not asking for money and celebrates what companies are doing and encouraging others to join,” Jackson said.

The notion also builds on a concept Jackson has taken to heart.

“You do more with your influence than your affluence,” Jackson said. “We decided that if we wanted to influence companies and impact communities, the best way to do that was to start an awards program for companies that excel in this area.”

Marcus said in a statement that corporate giving was a key reason Home Depot became so successful. Marcus now serves as an ambassador for goBeyondProfit. 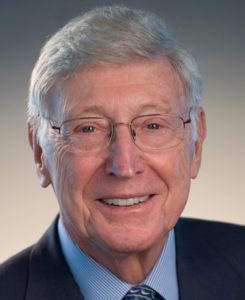 “My experience at The Home Depot proved to me that giving-back will benefit your business,” Marcus said. “As a fledgling company with all the worries and concerns about making a business work, we began a practice of giving-back that I believe was a corner-stone for our success. That’s why I agreed to help launch goBeyondProfit.”

Marcus’ outlook is supported by a 2016 story in the Financial Times, which is referenced on goBeyondProfit’s website. The headline observes: “Companies with a purpose beyond profit tend to make more money.”

The resources contributed run the gamut from medical care to legal assistance, educational programs, workplace development skills and environmental efforts, mentoring, and disaster relief, according to the statement.