The Moreland Plaza shopping center at Moreland and Custer avenues as it appeared in 2021. (File Photo by John Ruch.)

A controversial makeover of Southeast Atlanta’s sprawling Moreland Plaza strip center is moving ahead despite objections from the community that the plan is too car-centric.

Empire Communities’ mixed-use redevelopment for the 30-plus-acre site at Moreland and Custer avenues includes 673 housing units and 19,500 square feet of commercial space. The City approved a site plan in June and more recently a “unified development plan” for a yet-to-be-scheduled two-phase construction starting with the residential portion. 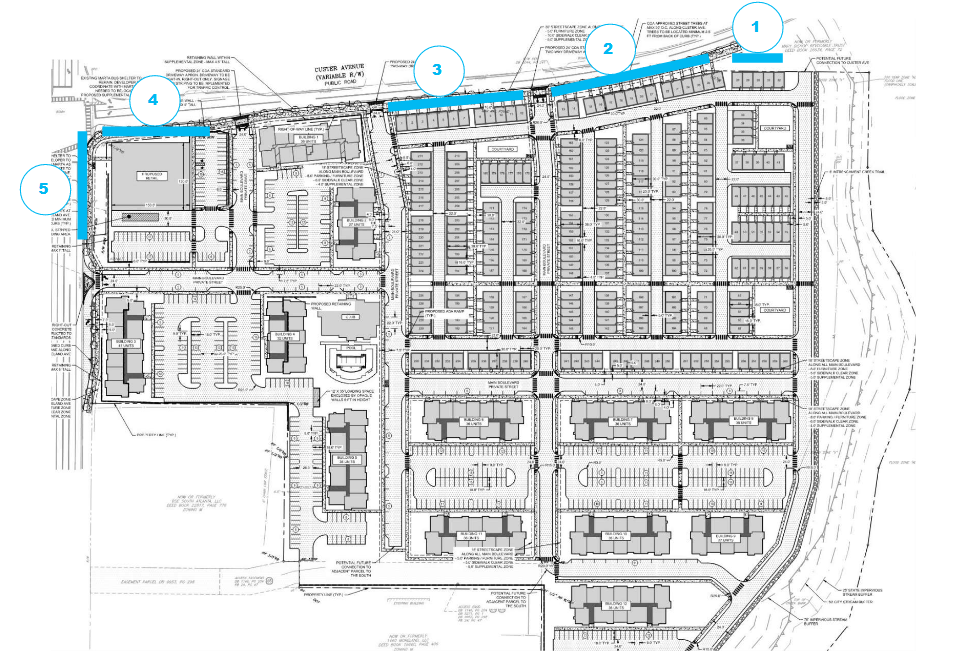 The latest site plan for Empire Communities’ redevelopment of the Moreland Plaza strip center. (Image from filing with Department of City Planning.)

The plan conflicts with a community vision — laid out in a 2008 study — that calls for pedestrian-oriented mixed-use centers with new street grids and parkland.

“Approval of this plan represents several lost opportunities for Southeast Atlanta,” said Ronald Lall, chair of Neighborhood Planning Unit W (NPU-W). “Lost is a true mixed-use project, which would have had a positive socio-economic impact on the area by bringing needed services, jobs and business ownership opportunities to an underserved area. Lost is an opportunity for urban design and infrastructure that is forward-looking, climate-responsible and an asset to the area.”

Lall says the approvals show the City’s special administrative permit process, through which the project was approved, is “an absolute failure and needs to be replaced.”

The Department of City Planning has said its hands are tied regarding that 2008 community vision because it was not specifically added to the zoning code for the area, particularly in a way that would tie it to a site plan. The study was performed via the Atlanta Regional Commission (ARC), which these days does include detailed zoning proposals in such studies.

NPU-W has been disturbed by Moreland Plaza plans since last year, when another — albeit smaller — car-oriented concept was proposed by another owner and developer. Then came Empire’s plan earlier this year. After agitation from NPU-W in particular, Empire tweaked its plan, reducing the number of housing units and parking and increasing the commercial square footage.

But the overall design of suburban-style private streets and surface lots is pretty much the same. Lall says the new plan “does not have any significant site design or layout improvements from prior versions.”

The approved plan includes 260 for-sale townhomes and 413 rental apartments, along with 1,197 surface parking spaces. In comments as part of a state Development of Regional Impact review, the ARC estimated the project will create a net of 4,204 daily new motor vehicle trips in the area.

The City approved several zoning variations for the project as well as attaching some conditions. Among the variations were for lack of direct pedestrian access to one of the buildings from the street front, and reduced setbacks to allow for units with garages. Among the conditions are allowing public access to the internal private streets and to a proposed trail along Intrenchment Creek at the rear of the property, which ties into the larger South River Forest green space concept.