Atlanta, the city in the forest. (Photo by Hannah E. Jones.)

The case for parks is an easy one to make — increased physical activity within the community, lower levels of stress and a healthier urban environment. But in a city with one of the starkest income disparities in the nation, city and nonprofit leaders are working to be intentional about providing quality access to the outdoors for all Atlantans.

On June 16, local park leaders gathered for a roundtable discussion hosted by nonprofit Park Pride about the future of parks in Atlanta and how to make them more accessible, equitable and plentiful. 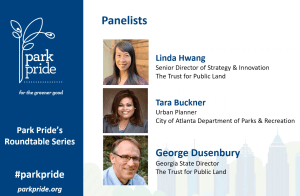 The conversation was moderated by Park Pride Executive Director Michael Halicki, who was joined by The Trust for Public Land’s (TPL) Linda Hwang and George Dusenbury, along with Tara Buckner of the Atlanta Department of Parks and Recreation.

To kick off the discussion, Halicki posed a hefty question — How can we advance an equitable park system where every Atlantan has access to a quality park?

The first step toward bolstering our local parks is knowing where our city stands. The panel highlighted Atlanta’s recent TPL’s 2022 ParkScore, where the city was named number 27 out of the nation’s 100 largest cities, jumping 22 spots since last year’s ranking. The 100 top cities’ ranking is determined by several criteria, including access, acreage, investment, amenities and equity. 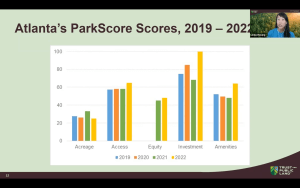 A breakdown on Atlanta’s ParkScore over the years. (Photo taken from Park Pride’s livestream.)

This success comes from increased access and investment in greenspaces around the city. Atlanta boosted its access by adding two new parks to the mix, the Westside Park and Cook Park, as well as the land acquired for the Atlanta BeltLine by The Conservation Fund.

City and nonprofit leaders showed dedication to upping investment in the past year, spending $206 per person on parks compared to the national ParkScore average of $98.

The panelists also broke down Activate ATL, a 10-year comprehensive Parks and Recreation Master Plan, which the City Council adopted in December 2020. The plan is centered around inclusivity, accessibility, sustainability and innovation.

With one of the worst income inequalities in the nation, some city neighborhoods are underrepresented in conversations about recreation and the outdoors. Buckner noted that many regional parks, like Piedmont or Grant Park, have conservancies to raise money and generate support, while neighborhood parks are often left to fend for themselves.

“If you are African American and lower-income, our parks may not be getting the same kind of consideration,” she said. “We have to work a little harder to provide equity in the areas that don’t have conservancies.”

Buckner continued: “Our Master Plan, Activate ATL, started with equity as a focal point. The beautiful thing is that 77 percent of all Atlantans right now live within a 10-minute walk of a park. Unfortunately, the devil is in the details, and residents that live in neighborhoods that are historically Black and brown, have 48 percent less park space.”

Hwang reflected the sentiment, adding that we cannot go off face value alone when addressing park access and equity in our city.

“It may be the case that people have a 10-minute walk to a park available to them, but when they get there, it could be [very small], and you’re sharing that park with a lot of other people,” she said. “That stark reality became much more clear during the early days of COVID when people were flocking to parks and trying to keep a safe physical distance from each other. Getting a handle on the park-equity divide in Atlanta is a really good place to start.”

“We feel a lot of pride in Cook Park, given that that neighborhood has been historically neglected, and the people in that community came together to help design that park,” Hwang said. “I think it’s a really good example of the City of Atlanta saying, ‘Where are the neighborhoods that have been neglected? Let’s take a look at those, and let’s do as much as we can.’ [The goal was] to inspire people, be practical and bring the community out.”

While the approach may vary depending on each person or organization, the panelists agree that prioritizing our parks is essential, whether it’s a local neighborhood greenspace or one of Atlanta’s iconic parks.

“We just need more parks,” Dusenbury said. “Everyone wants a Piedmont Park or something smaller. Once you have that park in place, you need the city stepping up and maintaining that park to a similar standard.”

To further engage residents, the city also released HappiFeet, an app that allows folks to share their experiences at Atlanta’s parks where the staff is notified in real-time.

The city also plans to release an equity data tool — potentially later this month — where folks can look at a ranking of parks in their neighborhood or the whole city, seeing which parks have the greatest need.

With Activate ATL as a guide, city and environmental leaders are optimistic about the future of our city and region’s outdoor spaces.

“There’s no point in building a great world-class park system if you can’t maintain it,” Hwang said. “When there is a movement of people who are clamoring for something as basic, elegant and beautiful as parks, things start to happen.”

Halicki signed off with a word of encouragement for all park proponents in the city, “We’re starting to see momentum, and the important thing is to seize the momentum.”