Murphey Candler Park has been a centerpiece of the Brookhaven community. It has served as a place where people could convene, tying the community together, but now it’s something that is tearing them apart.

Murphey Candler Park is a 120-acre park in the City of Brookhaven that includes sports facilities, a series of trails, a lake and a tree nicknamed “Big Murph.”

In 2015, the City of Brookhaven began the public input process for an “aspirational wishlist,” as Communications and Public Engagement Director Burke Brennan describes it.

The city decided to allocate nearly $9 million to Murphey Candler and released the plans for another public input process, including pop-up events and surveys.

The park plans were passed by 60 percent of voters in 2018, according to Reporter Newspapers.

But then the trouble started.

Horseshoe Road, dubbed “Loop Road” by residents, has been closed to cars since the 1970s. The short road has fallen into a state of disrepair in recent years, but the city has plans to rehabilitate the space.

The master plans include reopening the road to cars and building parking spaces to accommodate people visiting the sports fields.

However, a significant number of citizens have taken issue with this part of the plan. Over 500 residents have signed a petition opposing parking and cars within the park.

Over the summer, the Murphey Candler Neighborhood Association distributed a survey asking residents to rank their concerns about reopening the road.

The 73 respondents were most concerned about pedestrian safety and deterioration of the natural habitat, ultimately opposing the reopening entirely. The committee asked Brookhaven to pause the plans for the road, but the city declined to halt their progress.

Jeffrey Cohen, a member of the Murphey Candler Neighborhood Association, is vocal about his opposition and has worked with other residents in an effort to change the city’s plans.

“The idea of driving cars in the park where people walk, kids learn how to ride their bikes… just runs counter to the idea of preserving natural, reflective and quiet spaces,” Cohen said.

The plans have also garnered some concern from people outside of the community, including Georgia Audubon. According to the organization, the park houses up to 182 species of birds.

The Executive Director penned a letter to the City of Brookhaven, asking officials to “carefully consider the bird habitat and many visitors who specifically visit this park to watch birds when making decisions on this park.”

That said, not everyone is opposed to the new development. Resident Zachary Johnson voted in support of the park plans.

Johnson visits the park with his sons daily to use the baseball field, feed the ducks or kayak in the summer. He said the park is crucial in creating a sense of community and would like to see it updated.

The Tree Canopy and Big Murph

The original plans from the city required cutting 258 trees, which left community members concerned about altering the natural landscape.

The day before Christmas Eve and the day of the Senate runoffs, a total of 14 trees were taken down. Among them was the beloved “Big Murph,” a century-old, 100-foot giant.

Cohen said the trees were unmarked before removal, and the cutting was done with haste.

According to him, the trees were felled before the community green plans had a formal bid or approval of funding by the Brookhaven City Council and didn’t abide by the design-bid-build process that other parts of the project followed.

“The City of Brookhaven and the City Council is a developers-focused council,” he said. “You basically get the feeling that you can’t stop Brookhaven unless you file a lawsuit.”

However, Brennan said the tree-cutting schedule was on the city’s website and was pushed back from an earlier date because it was workshopping its plans to remove fewer trees.

The City of Brookhaven ultimately opted to keep 65 percent of the trees earmarked for removal, cutting down 90 instead of 258.

Most of the trees were cut for pool parking and the community green, which is designed to include a 30’ diameter stage and electrical outlets, two major points of contention between the city and detractors of the development plan. 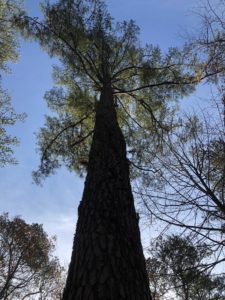 “Big Murph” standing at 100 feet tall and a century-old. Photo by Jeffrey Cohen.

Murphey Candler Park is beloved by citizens, but it’s also what’s dividing them.

Because the City of Brookhaven is unwilling to pause the construction or collect more public input on parts of the plan, Cohen believes city officials aren’t concerned with the priorities of their constituents.

“This is really what happens when a city starts to grow up and starts to move forward without the input of citizens, and how that makes citizens feel,” he said.

Cohen emphasized that the impact would last generations, ultimately “changing the natural character of the park.”

On the other hand, Johnson feels the city was transparent with their plans and are fulfilling the wishes of the majority of the community.

“You go to communities that are dying, and they would love to have the problems that we have,” Johnson said. “That’s a Godsend. I don’t know how short-sighted these people have become, but it really is breathtaking, the level of their self-centeredness… when it comes to the betterment and the growth of our community.”

Ultimately, Brennan advises deciding for yourself.