The nation’s largest emitter of greenhouse gas is to see one of its four coal-fired power units close by Jan. 1 2022, at Plant Scherer near Macon. Cleanup at this one unit is expected to take 46 years. 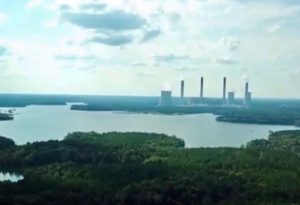 The closure is expected to result in a sharp drop in CO2 emissions. The projected decrease is 64 percent by 2024, relative to the peak in 2007. This amount includes emissions from replacement sources of electricity, according to terms of the transaction that was approved June 26.

Plant Scherer produced 16.7 million metric tons of CO2 in 2018, according to the most recent report by the U.S. Environmental Protection Agency. The plant burns subbituminous coal that’s mined in Wyoming’s Powder River Basin and transported by Norfolk Southern Corp. The coal provides power to steam generators that create electricity.

The owners also predict a sharp drop in the cost of producing power. The unit once was the lowest-cost provider in their system. Now it is the most expensive provider in the network operated by JEA and Florida Power and Light Co., according to terms.

Plant Shererer is the facility that was the subject of protests at the state Capitol this year.

Residents of the town of Juliette, where the plant is located, came to Atlanta seeking legislative relief for hazards. Cobalt and boron has been detected in groundwater around the plant, according to findings in a 2018 report released by the Environmental Integrity Project and Earthjustice. The Legislature did not enact regulations to address the concerns. 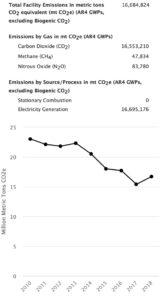 Georgia Power operates Plant Sherer and is an owner. Other owners are Municipal Electric Authority of Georgia, Oglethorpe Power, Gulf Power, and the City of Dalton.

JEA, a partial owner of the unit to be closed, observed in a statement:

The Sierra Club’s Stephen Stetson, a senior campaign representative with the organization’s Beyond Coal Campaign, said in a statement:

The environmental cleanup at Unit 4 is expected to last until 2066, terms show.

Total cleanup costs at Unit 4 are projected at $57.6 million, according to the terms. This cost is part of the reason that the Florida operators have decided to close the facility that JEA has co-owned since Plant Scherer opened. Together with operating costs, the facility is no longer cost effective. The terms make repeated references to the cost of operating the facility, including these:

The environmental ramifications include the following, as outlined in the terms:

“Will avoid cost of future environmental upgrades. These are currently estimated to be as follows: