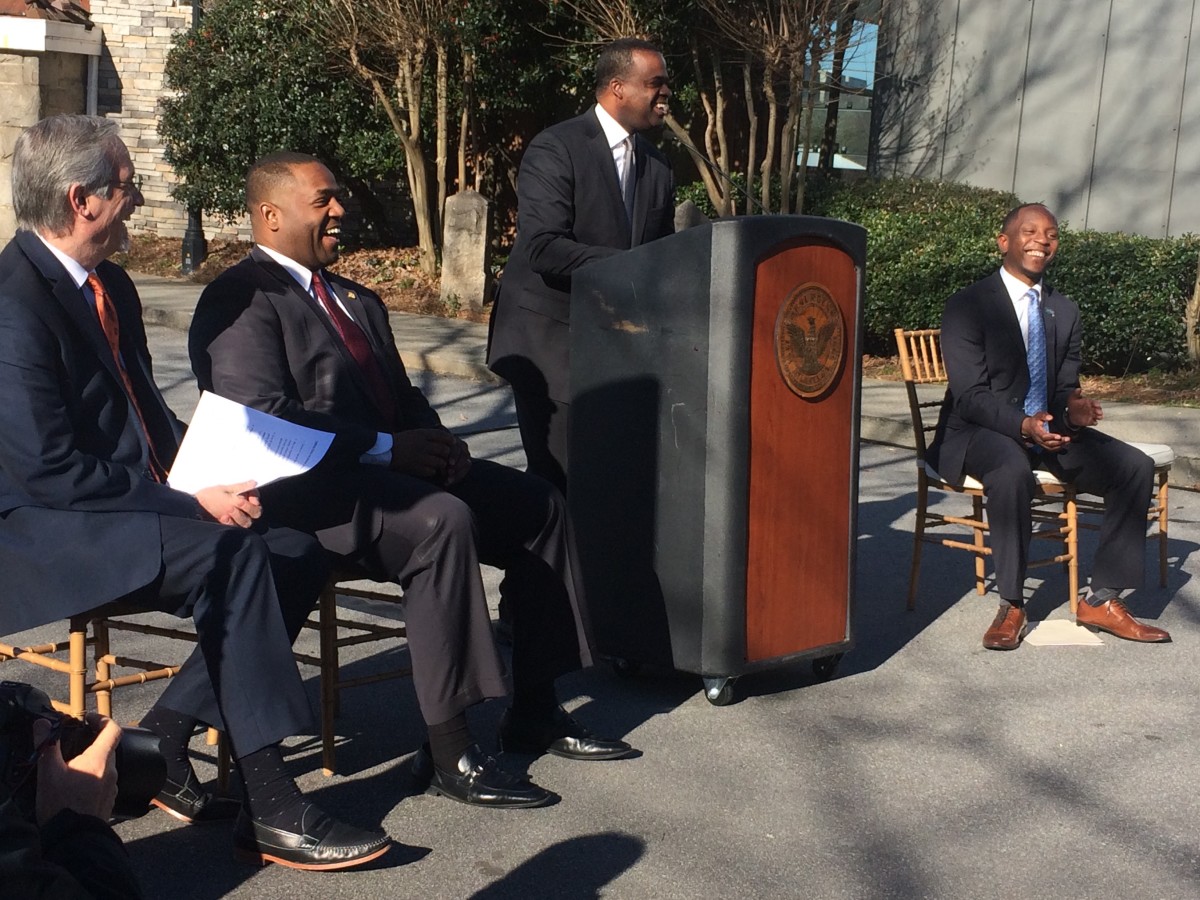 Everyone is all smiles at the announcement that an agreement has been reached between the City of Atlanta and APS over BeltLine payments. Paul Morris, Ceasar Mitchell, Kasim Reed and Courtney English celebrate in front of Park Tavern next to the BeltLine (Photo by Maria Saporta)
Share70
Tweet
Share101
Pin
Pocket
WhatsApp
Buffer
Email
Reddit
171 Shares

Friday morning was a Kumbaya moment for the City of Atlanta and the Atlanta Public Schools.

Leaders from both entities heralded the end of a hard-fought battle over how much the City of Atlanta owed APS over tax revenues from the Atlanta BeltLine.

“It is a good day to be an Atlantan,” said Courtney English, chairman of the Atlanta Board of Education. “While I love this city, while I love this mayor, I’m glad we are through this process.”

While the city had wanted to move the payments to a percentage of the tax revenues earned through economic development along the BeltLine, APS wanted guaranteed payments. English said he was willing to reduce the amount of payments for that guarantee. 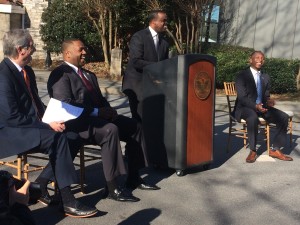 Everyone is all smiles at the announcement that an agreement has been reached between the City of Atlanta and APS over BeltLine payments. Paul Morris, Ceasar Mitchell, Kasim Reed and Courtney English celebrate in front of Park Tavern next to the BeltLine (Photo by Maria Saporta)

Other features of the agreement included the city becoming current with what it owed APS through 2015 – a total of $14.77 million. That includes a $9.1 million payment the city made over the holidays to make sure the City would not go into legal default for nonpayment to APS. The additional payment of $5.7 million will be due by the end of February.

The City also agreed to making a one-time $10 million in 2017. Atlanta Mayor Kasim Reed said the City would be paying that out of the proceeds of the sale of the Atlanta Civic Center.

Lastly, the City will work with APS to transfer a piece of property owned by the Atlanta Housing Authority for education purposes.

Everyone said having an agreement, which still needs approval from the school board and the Atlanta City Council, would mark a new day of cooperation between the City and the school system.

“I hope by resolving this issue, it will signal a renewed partnership between APS and the City of Atlanta,” English said. “We need each other to be successful.”

Paul Morris, president of Atlanta BeltLine Inc., said the agreement was in the spirit of the whole redevelopment project.

“Our mission is to bring Atlanta together,” Morris said, adding that the BeltLine is reconnecting 45 Atlanta neighborhoods. “It also will connect 22 of Atlanta’s most important institutions – its schools. This kind of connectivity will contribute to the health and well-being of our community.”

In fact, students will be able to walk and bike to their schools “safely” along the BeltLine. It also will create jobs where the students can work after they graduate, Morris said.

“I look forward to working with the Atlanta School Board and the Atlanta City Council,” he said about the deeds – promising to work in a “highly collaborative and speedy manner.”

Later in a conversation with English, the Mayor said: “We will not be unreasonable as it relates to the issues around the deeds.”

The Mayor also described the process of reaching an agreement.

“We will have a reset in the relationship and work on other things,” he said. “Without this resolution, the BeltLine had a cloud of uncertainty hanging over it in every respect.”

Now that cloud has been removed, and it will be possible for the Atlanta BeltLine to proceed more freely in securing new development and funding for the multi-purpose corridor.