New life for talks about transportation funding, but no quick fixes in sight

The air in Atlanta and Washington suddenly seems filled with talk about creative methods of financing to pay for repairs to roads, bridges, sidewalks and other so-called transportation infrastructure. 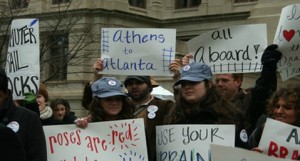 The once-popular Brain Train, to link Athens and Atlanta, is the type of project that could be funded by a revised TSPLOST, advocates say. Credit: home.comcast.net/~tomchouston/bt

At the state Capitol this week, a new consortium announced it was backing a revision of the TSPLOST approach to upgrading transportation. Atlanta Mayor Kasim Reed, in his inaugural address this month, cited his plans to ask voters in 2015 to approve borrowing up to $250 million for infrastructure improvements.

President Obama, during his State of the Union address on Tuesday, called on Congress to approve new funding for roads and ports by this summer. On Jan. 16, a bill to create an infrastructure bank was submitted in the Senate by a bipartisan group. A similar proposal was filed in November in the Senate.

The one similarity running through all the conversations is how to pay for repairing and expanding the nation’s infrastructure.

The U.S. has more than 4 million miles of roadway networks and more than 228,000 miles of rail networks, according to The 2014 Pocket World in Figures, by The Economist. The U.S. has not had just one long-term transportation funding program in place since 2005, and it is a two-year plan that ends this year.

The federal legislation all boils down to the lack of support for raising the federal gasoline tax, now 18.4 cents a gallon. That lack of funding trickles down to states and local jurisdictions, and until that federal imbroglio is resolved, local communities will have to come up with a lot of the money for local transportation projects, according to Brookings Institute scholar Bruce Katz.

Obama has talked in the past about and infrastructure bank. A few years ago, Reed raised hopes that Atlanta could tap it for funding.

Obama didn’t mention such a bank in his Tuesday speech, and focused instead on closing tax loopholes to pay for infrastructure improvements. Obama said the country could:

Ports are in the conversation because the House and Senate are working on a proposed $8.2 billion piece of legislation to improve ports and waterways. The planned deepening of Savannah Harbor would get its federal funding from this pot of money.

As Obama’s latest challenge grinds through the machinery, the politics of the congressional proposals to devise alternative transportation funding are of note.

For example, Sen. Lindsey Graham (R-S.C.) has signed two recent transportation bills that provide for alternative funding – and were introduced by Democrats with bi-partisan co-signers.

Graham’s support may not be noteworthy, except he’s up for reelection this year and now is the target of opponents who contend he’s not conservative enough for South Carolina. A critic back home was quoted in an NPR report as saying Graham, first elected in 2002, is, “the Democrats’ favorite Republican, which should tell you something about him.”

A few months before this most recent bill was dropped, Graham co-signed another bi-partisan transportation proposal. It, too, would provide creative financing mechanisms to pay for transportation improvements. Senate 1716 would create an “infrastructure financing authority.”

At the Georgia Capitol this week, two groups that fought each other over the 2012 TSPLOST referendum came together behind a revision to the existing law. Political writer Tom Baxter reported on the coalition in saportareport.com.

Reed said this month he intends to seek voter approval in 2015 of an infrastructure bond in the amount of $150 million to $250 million. The mayor has been discussing this concept since at least September 2012.