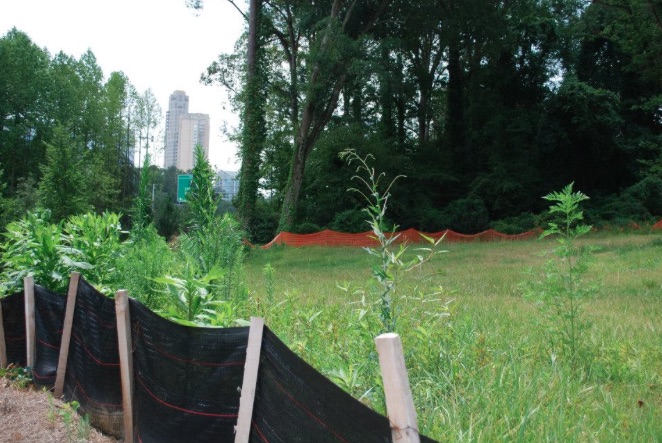 The visioning process has started for a new park in Buckhead that’s adjacent to PATH 400, the multiuse trail being built along the Ga. 400 corridor that is to link with the Atlanta BeltLine, Livable Buckhead, Inc. announced Friday. 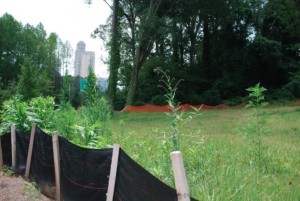 A park planned for a site adjacent to PATH400, on Old Ivy Road, provides this view of the Buckhead skyline. Credit: Livable Buckhead

The park is to be established at 519 Old Ivy Road. The parcel measures 0.65 acres and is located a half-mile north of Lenox Road, just west of Ga. 400.

A steering committee that’s to develop a concept plan met for the first time on July 16. The plan is to be completed in October. Atlanta is to oversee the park’s design team. Livable Buckhead, Inc. is handling community engagement.

Once the plan and cost estimates are complete, Livable Buckhead is to identify sources of funds to build the park.

Livable Buckhead brokered the acquisition of the property, which now is owned by the city of Atlanta. 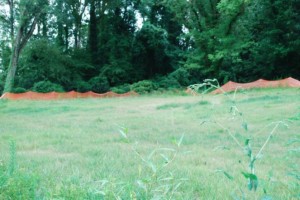 The site of a future park adjacent to PATH400 has been cleared and is ready for development. Credit: Livable Buckhead

A house that once stood on the property was demolished while the construction of the first phase of PATH 400 was underway. This timing saved money and will enable the park to be built more quickly than if the house still stood, according to the July edition of BuckheadLines, the newsletter of Livable Buckhead, which was released Friday.

The house was typical of its vintage in Atlanta’s development cycle, according to tax records.

The house was built in 1939 and was spacious for its day – 2,000 square feet with a fireplace, three bedrooms and three bathrooms, and with a partial, unfinished basement, according to tax records.

PATH 400 is to be a 5.2 mile trail from Loridans Drive, in north Buckhead, to the Atlanta BeltLine, near Piedmont Hospital. 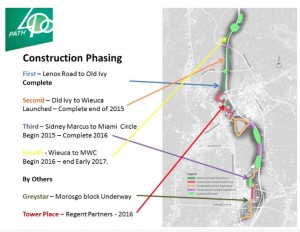 This map shows the scheduled opening times of phases of the PATH400 project. Phase two is about two months behind schedule because of design changes, according to Livable Buckhead. Credit: Livable Buckhead

Livable Buckhead is overseeing the trail’s development. Denise Starling serves as executive director of the organization, which is charged with improving sustainability and quality of life in Buckhead.

The concept for a trail emerged from Atlanta Councilmember Howard Shook’s efforts to increase the amount of park space in council District 7. Concurrently, the Buckhead Community Improvement District decided to pursue open space as part of its mission.

The study completed in 2010 determined that land for new public space is prohibitively expensive, priced at about $500 a square foot just before the great recession.

As a result, the study recommended an approach of gaining public access to land that is owned by the public, but used for purposes other than recreation.

The right-of-way along Ga. 400 provided the framework for PATH400, and the Georgia Department of Transportation provided unprecedented access to unused right-of-way. Over time, Shook has led efforts by the city to add a parcel here, a parcel there. Ultimately, the route of PATH400 was cobbled together from a number of landowners.

Five partners are instrumental in PATH400, according to Livable Buckhead: