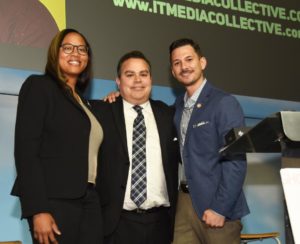 The alliance of the Georgia Hispanic Chamber of Commerce and OUT Georgia Business Alliance was celebrated by Petrina Bloodworth, president of OUT GBA (left); Santiago Marquez, president and CEO of GHCC; and Chris Lugo, executive director of OUT GBA. Credit: GHCC

Leaders of both chambers said improved collaboration will position the organizations to address Georgia’s changing business landscape. The partnership also was established as reports from the Atlanta Regional Commission and Census indicate material changes are in store for core members of both organizations.

“This new agreement is necessary not only to take a joint position when it comes to business or legislation, but also to respond to some expectations generated by the demographic changes of society,” Santiago Marquez, president and CEO of the GHCC, said in a statement. “It is not only important to be diverse but also inclusive.”

“To better serve the growing LGBTQ+ and allied business community across the state of Georgia, it’s critical that we leverage partnerships with economic leaders like the Georgia Hispanic Chamber of Commerce,” Chris Lugo, executive director of OUT Georgia Business Alliance said in the statement.

“We fully embrace the power of access, visibility, representation, and collaboration amongst minority and marginalized communities, and we know that our entrepreneurs and business leaders proudly represent a diverse set of identities, including LGBTQ+. This intersectionality is a strength when people can bring their whole selves to their business, their workplace, or their community.”

Petrina Bloodworth, president of the OUT Georgia Business Alliance, said in the statement the partnership is a “win-win for everybody involved, and we are excited for a future working closely together.

“This collaboration between OUT Georgia Business Alliance and the Georgia Hispanic Chamber of Commerce demonstrates our commitment to serving not only our respective members better but also our allies and diverse communities across the state,” Bloodworth said. 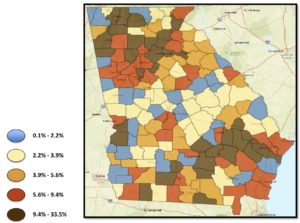 Georgia’s Latino and Hispanic population is concentrated around cities and in the southern and coastal counties. Credit: ARC

The GHCC reports about 1,300 members, 45 percent of which are women-owned businesses. OUT Georgia Business Alliance reports its role as Georgia’s LBGTQ+ and allied chamber of commerce.

Each organization has considerable influence, accoding to these two illustrations:

Demographic information compiled by the Atlanta Regional Commission and the Census indicates both groups face evolution in the coming years.

The ARC produced in February 2018 a Regional Snapshot: Metro Atlanta’s Hispanic and Latino Community. The report captured dramatic growth rates in both metro Atlanta and in some of Georgia’s other urban areas, particularly in and around Athens, Augusta, Columbus, and Savannah. Highlights of the report show:

The Census released an estimate Nov. 19, 2019 showing that about 1 million same-sex households exist in the United States. Credit: census.gov

The 2020 Census is being closely watched for what it will reveal about the nation’s LGBTQ+ population. The results will be parsed out to provide snapshots of the populations in Georgia, down to the county, city and Census track level.

For the first time, the dicennial Census is to ask couples who reside together to mark their relationship as “same-sex” or “opposite sex” couples. The question is expected to provide a more accurate indication of the number of same-sex couples in the United States that was available through questions on gender and relationships that were asked in previous Census questionnaires.

In metro Atlanta, the number of same-sex partner households declined between 2013 and 2018, according to estimates reported in the Census’ American Community Survey. The ACS observes on demographic trends in the years between the decennial Census.

Previous Article
Tax subsidies for development: An imprecise science tilted toward developer
Next Article
‘Little Women’ – the best movie adaptation of the novel to date