ARC Executive Director Doug Hooker is pushing back against a new national ranking by Smart Growth America that shows metro Atlanta is one of the worst regions in the country when it comes to sprawl. 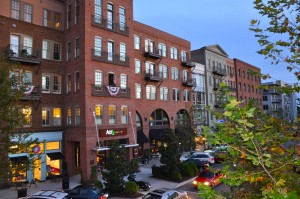 This development in downtown Woodstock was promoted by the ARC and is one example of why the ARC contends a new report that cites Atlanta’s sprawl is out of date. File/Credit: Donita Pendered

Hooker cites a 2013 report by Chris Leinberger, a land use strategist and developer, that announced metro Atlanta is, “experiencing the end of sprawl.” Leinberger’s study observed that walkable urban development now accounts for most of the development in metro Atlanta.

The report by Smart Growth America carries additional sting because it links a number of social maladies to sprawl. Social mobility is one striking measure.

Metro Atlanta ranks 50 out of 50 regions, and 99 out of 100 when compared to the nation’s top cities, rising above only Memphis, according to the report by Harvard University. This report was cited in the Smart Growth America report.

The new report provides a number of charts that shows where metro Atlanta fits into the national picture in terms of communities that enable people to walk to meet most of their daily needs and obligations.

The one sentence that references Atlanta states: 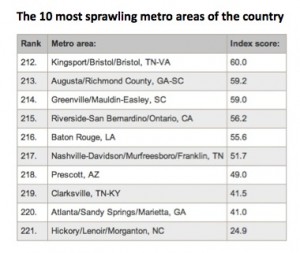 Hooker did not allow the most recent report to pass without rebuttal from the region’s planning and intergovernmental coordination agency.

Hooker cited three points to make his case that metro Atlanta has turned the corner on development practices that foster growth in rural areas far from job centers that have resulted in some of the longest job commutes in the country:

Incidentally, Leinberger’s report characterized metro Atlanta as the “poster child of sprawl” and used the region to deliver a sweeping prognosis that placed his report in a historic context in the realm of urban development: