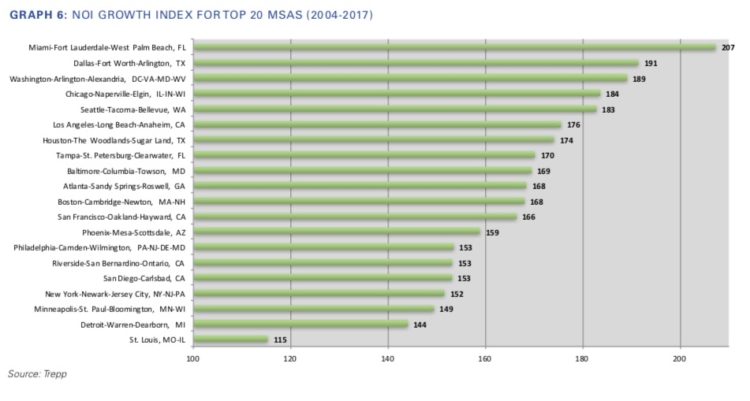 A report released Tuesday suggests there’s no reason to suspect prices will decline anytime soon in the rental apartment sector. This would seem to increase pressure on advocates of affordable housing as they seek to entice developers to build units and price them at below-market rates.

Likewise, a second report released Tuesday shows sales prices for single-family detached houses in metro Atlanta rose over the past year by a median rate of 9.5 percent. The median sales prices was $264,000.

Atlanta Mayor Keisha Lance Bottoms has made housing affordability a top concern of her administration. Several governments around the region are trying to develop programs to increase the supply of homes affordable to those earning the income of schoolteachers, including Brookhaven and Cobb County.

The apartment report released Tuesday shows metro Atlanta ranks 10th among the nation’s top 20 metro areas for the period 2004 through 2017. The index is the net operating income of rental apartment complexes, which is a barometer of market prices. Prices in metro Atlanta began rising sharply by 2012, whereas increases started earlier in some other regions, according to a year-by-year report.

Even at a rank that seems to be middle-of-the-pack, the increase in metro Atlanta’s net operating incomes are very close to the top tier cities. A few examples:

The report was released by Trepp, LLC, which is cited as as the industry’s largest commercially available database of securitized mortgages. It has offices in New York, London and Oakland, Ca.

Looking to the future Trepp analysts posed this question to themselves in their October report — “Outlook: Will Economic Pressures Squeeze Multifamily Performance?” The complete response reads: 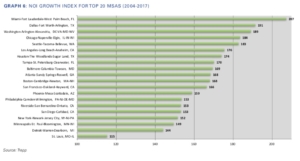 At that price, there’s little reason to expect rental prices to drop below the starting price of $1,314 for a one-bedroom unit with 619 square feet, according to prices posted at apartment.com. The largest one-bedroom is priced starting at $2,219 for 943 square feet. The most expensive unit, three bedrooms and 1,528 square feet, is priced at $3,750 a month.

The report, released via metroatlantaceo.com, continues: “The median sales price in September was $264,000, an increase of 9.5 percent from last September. The average sales price was $322,000, up 7.7 percent from the previous year.”

Bill Murray, president of Atlanta Realtors, looked ahead to the traditionally slower home sales cycle in the winter months and observed: