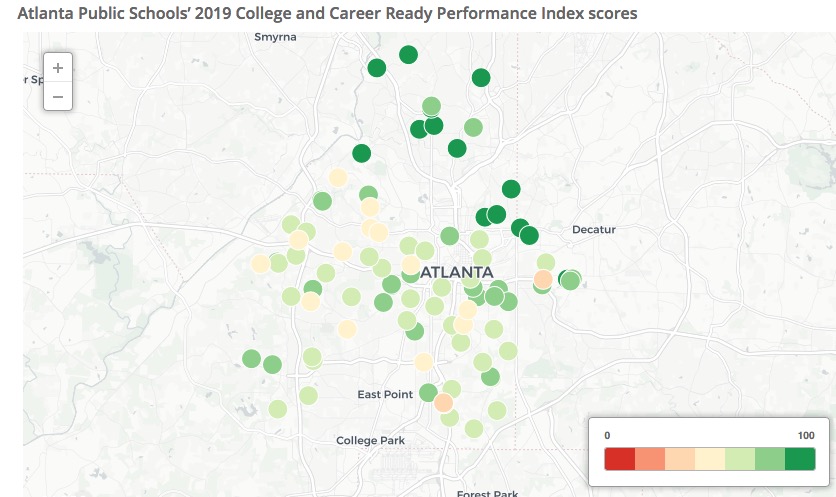 Atlanta as a school system looks pretty good on a new state report card — it made gains since the last report, while the state overall declined. But as anybody will tell you, that single city score hides gaps among schools.

Zoom in to see schools that share a campus

Atlanta Public Schools, taken together, score a 74.1 on the state “College and Career Ready Performance Index,” compared to a statewide average of 75.9. Atlanta went up almost a point since last year and the state went down almost a point.

Within the city, there’s a tie for highest-scoring school between Druid Hills’ Springdale Park and Morningside elementary schools. Both scored an overall 96.7 on the CCRPI.

A ton of things go into that single score. And neither of those two schools gets below 93 on anything: the students are mastering their English, science, social studies and math lessons. They’re meeting targets, they’re good at reading, they’re rarely absent from school long, and they’re passing arts and foreign language classes.

Middle and high schools scorecards also include how many students are showing up, taking classes and doing well, as well as student participation in things likes arts, languages or advanced placement classes. Schools are also supposed to be graduating students who are ready to sign up for college, technical school or training for a career credential.

But only six Atlanta schools scored above 90. Those six are clustered in north and northeast Atlanta.

Superintendent Meria Carstarphen has overseen the school system since 2014, during which time there have been gains in many places on many kinds of tests (2019 CCRPI scores are only comparable to last year’s, not any older ones.)

But time and time again, Carstarphen talks about the achievement gap between white students and black students, which shows up on any number of measures. She mentioned the results of Milestones testing at a talk at the Atlanta Press Club recently.

Something like 60% to 70%  of APS students are not up to state standards, Carstarphen said.

“When we drill deeper and consider socioeconomics or go into the space of race, the results are absolutely sobering,” she said.

Getting things unstuck is a heavy lift. She pointed to the Barack and Michelle Obama Academy in Peoplestown and Hollis Innovation Academy in Vine City.

In the neighborhoods around both schools, half of households are living on less than about $25,000 and about $21,000 per year, respectively, according to 2015 data. One hundred percent of students in both schools are black, according to this year’s state data. Both schools (or their predecessors) have long ranked at the bottom of all kinds of measures.

APS has changed some of the staff, some of the structure, but has also teamed up with other partners who brought in things like extra money and people for “wraparound” services.

Part of APS’ 2014 “turnaround” strategy for low-performing schools is working to find money and partners (like Communities in Schools) for wraparound services. But the strategy also includes things like more funds for intensive tutoring and providing professional development for teachers and school leadership.

And student proficiency has roughly doubled at the two schools Carstarphen mentioned.

The tragic news is that after doubling, the schools are at about 17.5% on Milestones end-of-grade tests.

As for the CCRPI, BAMO got 50.2 and Hollis Elementary got 63.4 — not the bottom of the scores, but near the bottom. The biggest gaps between them and the top schools come in content mastery: knowing the core subjects.

CCRPI as a measurement has its critics.

Gov. Brian Kemp, for one, said in a press release when scores came out last week that “in a year when we’ve seen nearly across-the-board increases in national test scores and graduation rates as well as Georgia Milestones scores, seeing the CCRPI show a decrease instead raises concerns about the measurement used to determine school and district achievement.”

State School Superintendent Richard Woods, in the same press release, said he was committed to reduce the weight of standardized tests in CCRPI, “and move toward a wider and deeper measurement of performance that reflects the true mission of K-12 public schools: preparing students for life.”

But even if CCRPI is skewed this way or that a bit, it still broadly backs up what Carstarphen has said about the achievement gap.

In the next few months, she said she wants to accelerate closing those achievement gap.

“This work will require devoted, energized committed voices who pledge to continue to do the hard work,” she said.

Table of all Atlanta schools and and their scores on English, Science, Math, Language Arts and other CCRPI indicators

All Georgia Department of Education CCRPI data on all schools statewide