Atlanta mayor Andre Dickens with family and guests at his swearing in ceremony at Georgia Tech's Grant Field on Jan. 3, 2022. (Photo by Kelly Jordan.)

Atlanta Mayor Andre Dickens and eight other leaders from the region were sworn in Wednesday as board members of the Atlanta Regional Commission.

Usually, a swearing-in doesn’t make news. But Wednesday’s virtual meeting was symbolically important because Dickens’ predecessor — now the former Atlanta Mayor Keisha Lance Bottoms — never was sworn in as an ARC board member because she never attended an ARC board meeting during the four years she was in office.

“It was such an honor to be sworn in and join the ARC team on its first meeting of the year,” Dickens wrote in response to a text. “Atlanta truly influences everything, and with collaboration, the opportunities for the broader region are limitless. I remain committed to leveraging the City’s resources to draw even larger circles within our state, and in the process, keep Atlanta and Georgia whole to benefit all families – regardless of their zip code.”

The other leaders who were sworn in during ARC’s board meeting on Wednesday included:

When he was running for mayor, Dickens pledged to take an active role in the region. 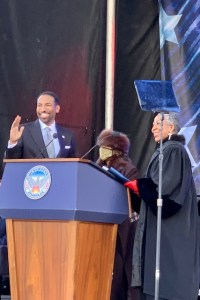 Andre Dickens is sworn in as Atlanta’s mayor at Georgia Tech’s Grant Field on Jan 3, 2022. (Photo by Kelly Jordan.)

“I’ll definitely go to ARC — me or a designee,” Dickens said last November in the heat of the runoff campaign. “The issues I’m concerned about are all regional issues — homelessness, public safety, transportation. I’m going to need all the support I can get. I will be open, inclusive and available.”

The Atlanta Regional Commission is the official planning agency for the 11 metro counties. The 41-member board consists

The 41-member ARC Board consists of the county commission chairs from the 11 member counties, the mayor and a council member from the City of Atlanta, and a mayor from each of the 11 counties with the exception of Fulton, which has two mayoral representatives – one from North Fulton and one from South Fulton. The ARC board also includes 15 citizen members selected by the board’s elected officials and a representative from the Georgia Department of Community Affairs.

“We are excited to welcome our new board members to the regional planning table,” said Kerry Armstrong, chair of ARC’s board. “Their fresh perspectives will help inform our ongoing work supporting the Atlanta region.”

The 11 counties that make up the ARC include Cherokee, Clayton, Cobb, DeKalb, Douglas, Fayette, Fulton, Gwinnett, Henry and Rockdale. The region also encompasses the City of Atlanta and 74 other cities in the region.