The final segment of the Noonday Creek Trail project in Cobb County is on schedule to open as early as June, when the trail will link Kennesaw Mountain and the Town Center commercial area. 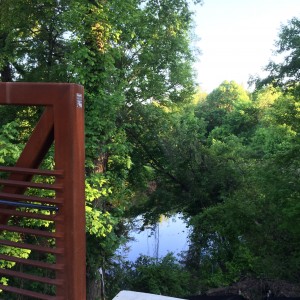 A pedestrian bridge is developing its weathered appearance in advance of this summer’s planned opening of the final segment of Nooday Creek Trail, in Cobb County. Credit: David Pendered

The Noonday Creek Trail is a seven-mile paved pathway that has been under construction for about five years. Once it’s finished, the trail will connect a major retail and collegiate destination with one of the country’s major battlefield parks.

The area also has historic significance related to the Atlanta Campaign of the Civil War, which recognizes its 150th anniversary this summer. Noonday Creek and Bells Ferry were the site of a cavalry battle in June 1864 that left perhaps 100 dead and was deemed not decisive by one account.

The trail is a short distance to the south of Kennesaw State University. Through its intersection with Barrett Lakes Boulevard, the trail will provide a route to bicycle or walk between campus and some of the residential developments that have opened in recent years to serve KSU’s growing student population. For example, U Pointe Kennesaw is almost adjecent to the trail, east of I-75.

Noonday Creek Trail is up to 10 feet wide, includes five pedestrian bridges, and provides trailheads and parking at multiple locations along the trail’s length. The trail will provide a walking and cycling experience that may be compared to PATH 400, the trail being built in the Ga. 400 corridor in Buckhead. Some segments of PATH 400 seem distant from development and others are intensely urban.

This segment spans 2.6 miles and is the final of five segments that were required to complete the entire project. 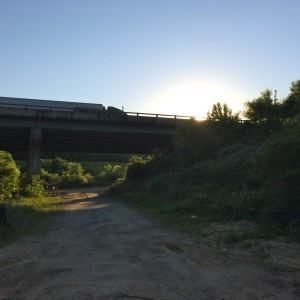 Noonday Creek Trail passes beneath I-75 along a stretch that combines a rural and urban experience. Credit: David Pendered

This is the construction schedule, which started in 2009, and the sources of funding, according to the Town Center Area Community Improvement District:

Noonday Creek Trail is part of Cobb County’s planned network of trails that are intended to be developed into a countywide system that connects major destinations through Cobb. The county’s website indicates Cobb has 31 trails and that 13 of the trails are accessible by Cobb County Transit. 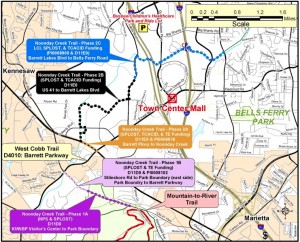 The area’s historic significance during the Atlanta Campaign is related in this passage by a KSU student, whose findings are maintained on a kennesaw.edu website: