The durability of metro Atlanta’s population growth is evident in the second expansion in three years at Northside Hospital Cherokee, and at Northside’s facilities in Forsyth and Gwinnett counties. 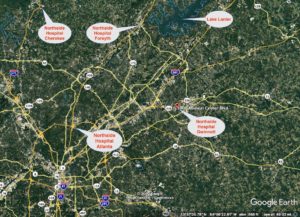 In the past five months, Northside has announced expansion projects in each of the three counties. The investments are central to the Northside’s strategy to further its presence in the region. Northside isn’t the only provider in Atlanta’s northern suburbs, but it is in a significant growth phase. 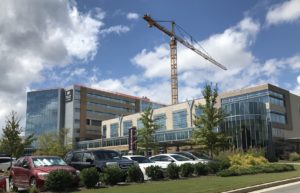 The development of Northside Hospital Cherokee illustrates the fast pace of growth in this part of the county.

The hospital is located at the intersection of I-575 and Ga. 20. Once a fairly pastoral setting with a view of the North Georgia mountains, the area now hosts a dense array of retail shops, restaurants and other neighborhood support businesses. Ga. 20 is being widened, in part to ease access to the gateway to the hospital, Northside Cherokee Boulevard. Along Ga. 20 eastward, “for sale” signs abound to advertise parcels of 35 acres or more.

The hospital opened with a six-story tower in May 2017. In 2018, the addition of two stories was launched. In 2020, the current expansion project started and in 2021 is to open with 53 additional beds for medical/surgery patients, and 27 observation beds that can be filled on 23-hour cycles. 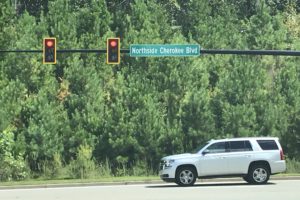 Two major roadways connect with Northside Cherokee Boulevard, which is the main gateway to Northside Hospital Cherokee. The roads are state routes 20 and 140. Credit: David Pendered

In Gwinnett County, Northside is expanding the emergency department at its Lawrenceville hospital. The two-story addition is to provide 27 exam rooms and 30 observation beds.

Obstetrics are part of the expansion programs.

“The Atlanta region is fortunate to have a very strong health care infrastructure. Northside is proud to contribute to it – by ensuring all people have easy access to quality care,” Echols said. “As area growth continues to explode, we have to work harder to keep pace as well as to anticipate the future.”