Northside commute worsened by closure of flex lanes on Ga. 400, north of I-285 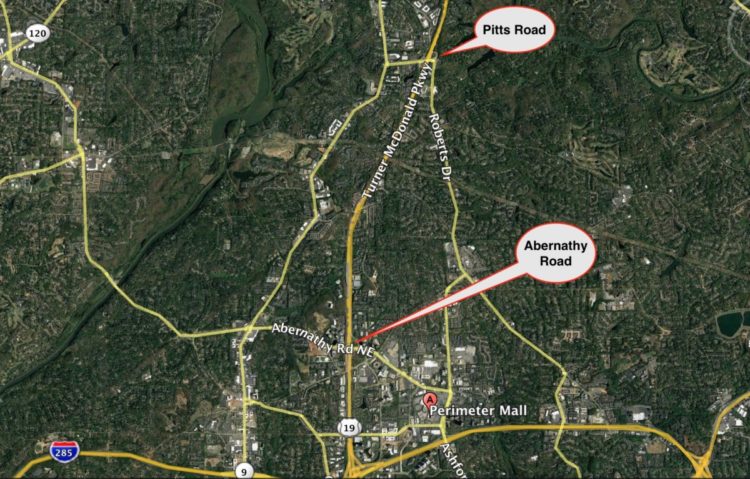 Commuters who use Ga. 400 north of the I-285 intersection lost a lane of travel Friday. The flex lane was permanently closed to enable the rebuilding of one of the state's busier intersections, slated to open in mid 2020. Credit: Google Earth, David Pendered

The commute along Ga. 400 worsened Friday as the northbound flex lane was permanently closed a short distance just north of the road’s intersection with I-285. The closure is part of the $800 million project to retool one of the state’s busier intersections. 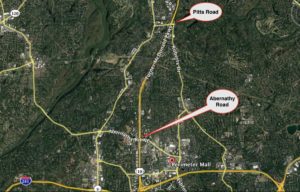 Commuters who use Ga. 400 north of the I-285 intersection lost a lane of travel Friday. The flex lane was permanently closed to enable the rebuilding of one of the state’s busier intersections, slated to open in mid 2020. Credit: Google Earth, David Pendered

The closure will temporarily choke mobility along about 2 miles of northbound Ga. 400, from Abernathy Road to Pitts Road, until the overall project is complete. The job is scheduled to be finished in mid 2020.

Commuters have been using this stretch of Ga. 400’s flex lanes since mid 2015, when the state opened them to travel as part of an effort to provide what it called “low cost/quick turnaround” ways to ease congestion along Ga. 400. Flex lanes were first opened along Ga. 400 in 2012.

Plans for this section of flex lane call for the 12-foot outside shoulder to be reduced to an 8-foot emergency lane. A temporary concrete barrier has been erected to close the lane. All travel is prohibited in this section of roadway.

The new entry point for the northbound flex lane is located north of Pitts Road and this portion of the lane will remain open during weekday rush hours – Monday through Friday from 6 a.m. to 10 a.m. and from 4 p.m. to 7 p.m.

Once the rebuilding of the Ga. 400/I-285 intersection is finished, this section of flex lane is to be replaced by new lanes the DOT calls “collector/distributor” lanes. These lanes are to run parallel to both Ga. 400 and I-285, and they are to separate commuters traveling a short distance from those traveling longer distances. 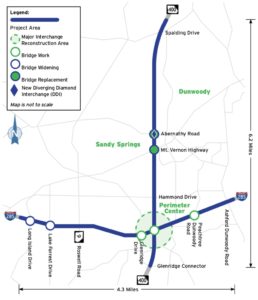 Georgia is using a public/private partnership to retool one of the busier intersections in the state, Ga. 400 and I-285. Credit: GDOT

The CD lanes are to be connected via a series of bridges that will be built through the current interchange.

The closure of the flex lanes is the just the latest wrinkle commuters have faced as the intersection is rebuilt. In just the past month, commuters have had to work around temporary closures on the southbound exit to Abernathy Road, the southbound ramp to westbound I-285, the northbound ramp to eastbound I-285, sections of the northbound flex lanes, and the overnight closure of two northbound lanes from Hammond Drive to Abernathy road.

GDOT has titled the overall project Transform 285/400. It is one of the major transportation initiatives of Gov. Nathan Deal.

While some have criticized the projected $800 expense as money that could have been spent to improve transit in the region, advocates including the state-run GRTA bus program say it will improve travel times for transit riders traveling through the area.

One GDOT talking point observes the project is to save 20,000 hours a day by 2019 for commuters who will be delayed for fewer hours in traffic congestion.

The project is being built by North Perimeter Contractors, a joint venture comprised of Ferrovial Agroman US Corp. as lead contractor and The Louis Berger Group and Neel-Schaffer, Inc. as lead designers, according to GDOT.

The work is funded through a combination of federal and state money, payments from the Perimeter Community Improvement District, and private sector funds provided by the contractor, according to GDOT.