“Weekend at Bernie’s” meets “The Imitation Game” in “Operation Mincemeat,” a movie with one of the most unfortunate titles in recent memory.

Yet the title is legit, being taken, as it is, from a heretofore little-known real-life mission that helped the Allies win World War II.

In 1943, it wasn’t exactly springtime for Hitler, but things weren’t looking good for the opposition. Something needed to be done to halt the Nazi momentum, so Churchill ok’d a scheme so bizarre it sounds made up. Somehow, the Germans had to be convinced that the Allies were going to launch an offensive in Greece, not the real target, Sicily. So British intelligence, led by Ewen Montagu (Colin Firth) and Charles Cholmondeley (Matthew Macfadyen), comes up with a plan that’s like a schoolboy prank on steroids: plant a corpse carrying “secret” papers off the coast of Spain and mislead the Germans into believing Greece is the word.

Much of the movie is concerned with how the ruse was meticulously set up. Montagu and Cholmondeley, assisted by a young officer named Ian Fleming (Johnny Flynn) – who will later write, well, you know, about a certain spy with a taste for a well, you know, certain martini – are obsessed with making their ruse a success. To that end, they fuss over everything from the bogus officer’s love life to the wallet litter (lint, ticket stubs, stamps, an unwrapped mint) in his trouser pockets.

Also central to the operation is a smart young widow named Jean Leslie (Kelly Macdonald), employed by the war office, who agrees to pose as the dead man’s fiancée. She’s the movie’s designated love interest as well, causing friction between the two leads.

Director John Madden (“Shakespeare in Love”) treats the material with respect that can verge on rigidity. To its credit, “Operation Mincemeat” is the sort of film to which you must listen carefully, or you could lose the thread of what’s going on. It has an element of stiff-upper lip-ness that’s suitable to the era and the high stakes. 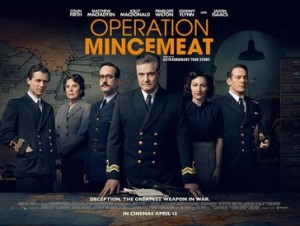 Plus, the story itself has a built-in fascination. Finding a corpse to carry the planted papers proves to be the easy part. Getting said body into the right hands is less so. There are a dozen or more unexpected glitches, including the ever-present push that this man who never was (the title, incidentally, of a previous film based on the mission) be pressed into service before he gets, um, too ripe.

Unfortunately, the picture has a few problems.  Madden’s approach is pretty humorless and can sometimes seem like it was made – not just set – in 1943 (Montagu’s children are referred to as his “fledglings”). And Michelle Ashford’s script has a tendency to complicate an already complicated plot.

On the plus side, there’s the excellent cast. You may recognize Macfadyen as the clumsily ambitious Tom Wambsgans in “Succession.” Firth, of course, is an Oscar winner for “The King’s Speech.” And for those who delight in their Jane Austen adaptations, “Operation Mincemeat” could be subtitled “The Tale of the Dueling D’arcy’s. Both actors have played the part, Firth in the 1995 miniseries and his co-star in the more recent 2005 movie.

“Operation Mincemeat” could’ve used a dash of humor and a pinch of suspense (even if we do know who won the war).  As is, it’s dutiful, steely-eyed and, alas, just a bit dull.

“Operation Mincemeat” is available for livestreaming on Netflix.