Orthodoxy is the easy way in early governor’s race forums 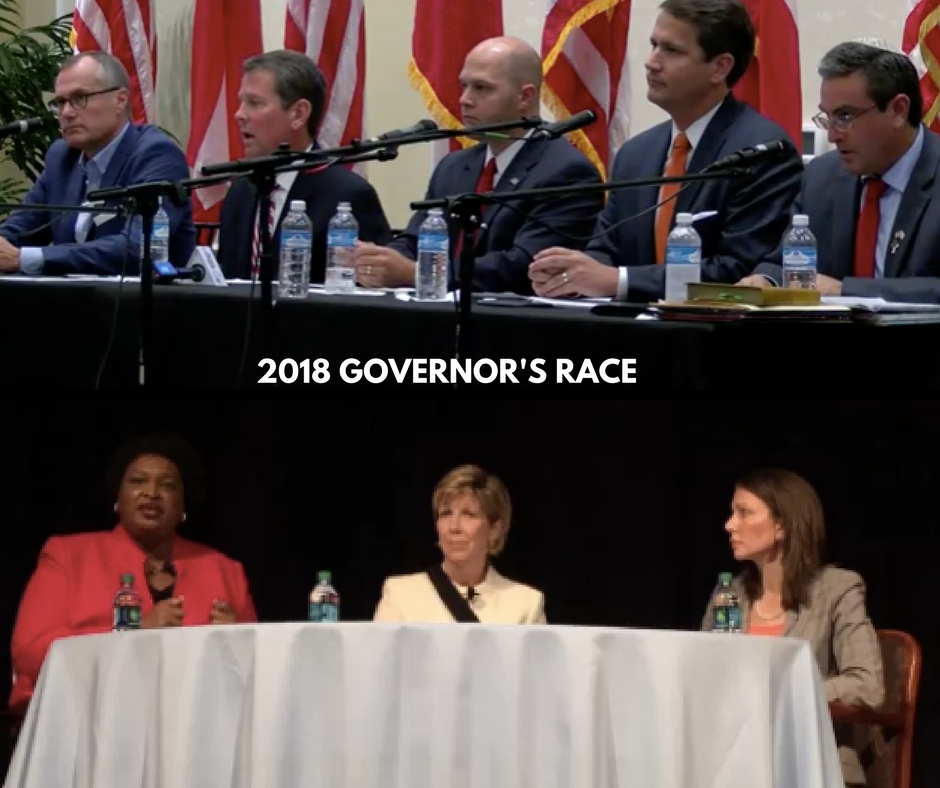 Over the past week or so both the Democratic and Republican candidates for governor have met to air their differences, and it should come as a surprise to no one that they don’t have many.

Sure, the two Staceys jabbed at each other over a couple of points and all the Republican challengers accused their better known rivals of being career politicians. But the overriding impression from this first pair of encounters is that both parties have grown settled in their respective orthodoxies, with very little way for candidates to break new ground.

As Greg Bluestein noted in his AJC report on the Georgia’s Win List event last week at the Carter Center, Georgia Democrats have in the past split with the national party over guns. This year both Reps. Stacey Abrams and Stacey Evans are singing from the same choir book page on the need for tighter restrictions on gun sales. To judge from reports — I didn’t attend and there doesn’t appear to be a video on line — they were in general agreement on other issues as well.

At their debate in Milledgeville Saturday morning, (which is on video) which Republican would you say voiced his resistance to “the status quo, political correctness and those who are here illegally?”

If you said Secretary of State Brian Kemp, because he has to hone his grassroots Republican message to the finest edge, you’d be correct. Kemp can’t afford much blue-sky stuff, like Lt. Gov. Casey Cagle’s pledge to create 500,000 jobs in four years. He has to worry more for the moment about the slightly more insurgent insurgent candidates cutting into his support.

However, any of the Republicans, Cagle included, would have been happy to say the same thing. These days Republican orthodoxy is sort of the old insurgency on Viagra. It’s the art of continually being surprised at how the system is rigged, even after your party has run the system for years. It’s the unanimous resolve to enact the religious freedom bill which the Republican governor has vetoed.

On casinos, sanctuary cities and rural healthcare, there seemed not to be enough difference to strike up much of a conversation, much less a debate.
In one response, State Sen. Hunter Hill did illustrate how Republican orthodoxy has evolved, although he didn’t challenge the orthodoxy. On the question of whether cannabis oil should be produced in the state, Hill cautioned against “flaunting federal law,” and said the state should “allow the federal government to lead us through the process” of resolving the issue.

This, Hill claimed, was a matter of conservative principle. Imagine, five or six years ago, a Republican legislator saying his state should allow the federal government to lead it through the process of implementing the Affordable Care Act. Conservative attitudes about the primacy of the federal government seem at least to be shifting — on issues like this, at least.

Just for supposing’s sake, suppose that primaries for statewide office were organized the way they are in California, where candidates of all parties run on the same ballot, and the general election is a runoff between the top two vote-getters, regardless of party.

Terrible idea, you might say, and a chorus of party chairs would say amen. One thing it might do, however, is to sharpen the tone of debates early in the campaign season.

If candidates had to appeal to the entire electorate from the beginning, it might not seem so smart to toe the party line on every issue. Candidates of each party would still have to hew to their core issues to preserve their base, but they might be more interested in finding places in the middle where they could gain ground.

A general primary would also change the nature of the questions, which generally lean toward the hot button issues the party faithful care about, and not the most pressing issues the state faces. Case in point: Plant Vogtle and what to do about it didn’t come up in either party’s forums last week.

Over the past month, South Carolina and Georgia have diverged sharply in the handling of their companion nuclear projects. In South Carolina, the V.C. Sumner nuclear expansion project has been cancelled, and Attorney General Allen Wilson has called for a criminal investigation of the project. In Georgia, facing virtually the same circumstances, the Public Service Commission has given the go-ahead for completion of the Vogtle project, despite questions about who’ll ultimately shoulder its enormous cost.

Shouldn’t the candidates for governor be talking about that, not at the end of the campaign but the beginning?

Previous Article
Sacrifice for freedom: Georgians in Normandy
Next Article
Decatur opens public housing that may be model for the future