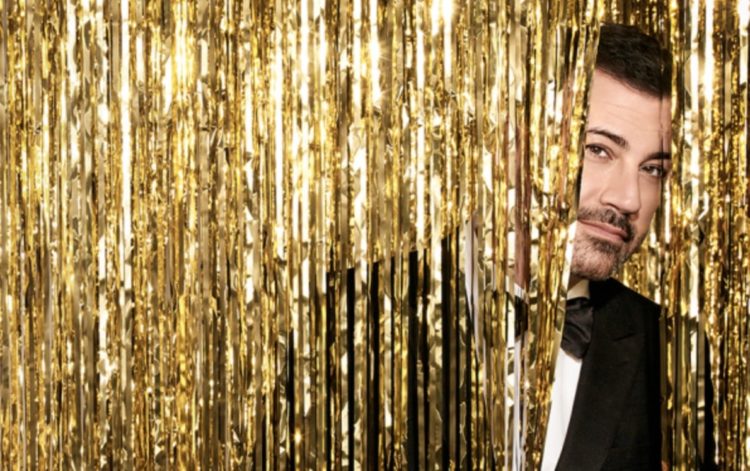 Jimmy Kimmel excelled at remembering the stars are the stars at the 89th Annual Academy Awards. Kimmel navigated the chaos of the evening without overreaching. Credit: variety.com

You are no longer the craziest thing ever to happen on Oscar night.

Ms. Littlefeather, as some of you may recall, was the semi-faux Native American sent by Marlon Brando to pick up his Oscar the night he won for “The Godfather.” 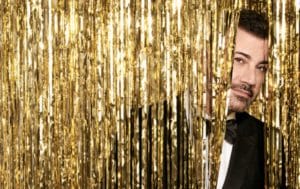 Jimmy Kimmel excelled at remembering the stars are the stars at the 89th Annual Academy Awards. Kimmel navigated the chaos of the evening without overreaching. Credit: variety.com

And then there was Robert Opel, who streaked the 1974 telecast, prompting David Niven to memorably remark, “Well, ladies and gentlemen … Isn’t it fascinating to think that probably the only laugh that man will ever get in his life is by stripping off and showing his shortcomings.”

But nothing … NOTHING… compares to what happened at the 89th Annual Academy Awards.

Because, as you’ probably heard by now, Warren Beatty and Faye Dunaway, forever famous as “Bonnie and Clyde,” announced Best Picture.

Instead of robbing banks, they almost robbed “Moonlight’ of its Best Picture Oscar.

It was not their fault. Somebody handed Beatty the wrong envelope – a duplicate of the Best Actress card that named Emma Stone for “La La Land.” Beatty looked at it, looked back inside the envelope (as if looking for another card), seemed to be hamming it up when really he was stalling for time. Then Dunaway, muttering something like, “You’re impossible” under her breath, grabbed the card, saw “La La Land” and read it out.

Two “La La” producers– including one guy who already knew it was a mistake, which is why he said “We lost, by the way” – had given acceptance speeches before Jordan Horowitz heroically stepped up to the microphone and said the immortal words, “I’m sorry, no, there’s a mistake. ‘Moonlight,’ you guys won Best Picture. This is not a joke.” 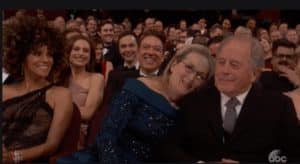 Meryl Streep, the actress whom President Trump tweeted is “highly overrated,” took shield behind her husband, Don Gummer, as she received a standing ovation during the 89th Annual Academy Awards. Credit: abc via cosmopolitan.co.uk

Chaos of a sort ensued, making the 89th Oscars the most memorable ever. But just as notable as the snafu was the graciousness so clearly exhibited by the two competing films, which have been tag-teaming each other all over the awards circuit for several months.

True, “Moonlight” missed its Big Cinderella Moment. And true, “La La Land” had to have its heart broken in front of millions of viewers (though Ryan Gosling could also be seen giggling at the absurdity of it all).

But there was a solidarity on view that was palpable– and so much more meaningful (and authentic) – than all that “we are all dreamers here, we are all storytellers, etc. etc. etc.” ad nauseum stuff we usually hear at events like this.

Jimmy Kimmel, bless his heart, had the unenviable task of trying to make it all make sense– or at least not insane.  And he did pretty damn well– castigating Beatty briefly and making a Steve Harvey joke (a reference to when Harvey announced the wrong Miss Universe winner in 2015).  “I blame myself,” Kimmel added after Barry Jenkins had his momentarily delayed Oscar Moment. “I knew I would screw this up. I promise I’ll never come back.”

Say it ain’t so, Jimmy.  You didn’t screw it up.  Somebody whose only job is to hand presenters their envelopes screwed up. Or maybe Beatty did, a little, by not asking someone to come out when he initially saw the card. Or maybe Dunaway– who was noticeably absent in the immediate aftermath– did, for (gently) bullying her co-presenter into handing her the card so she could announce it (She obviously thought Beatty was hamming it up, too).

Aside: Please note, Beatty was more than glad to hand her the card without so much as giving her a heads up … like, a what- is– this …Faye, look at what it says … nudge. 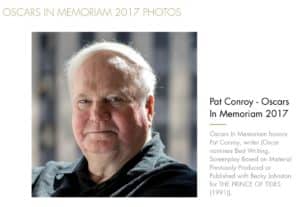 Atlanta-native author Pat Conroy was memorialized during the 89th Annual Academy Awards for his Oscar-nominated ‘The Prince of Tides.’ Credit: oscar.go.com

As for the rest, this was arguably one of the best Oscar shows in recent memory.  Kimmel knows how to be a host.  Billy Crystal might be more electrifying, but he’s a performer. Kimmel is in the tradition of Johnny Carson– he knows the stars are the stars of the evening.  He’s there as a– hate this buzzword– facilitator.

Things I especially liked about this year:

They may have messed up on some of In Memoriam (leaving out Robert Vaughn and Garry Shandling???)  But they did include Pat Conroy and Bill Nunn. Now that’s class, pure and simple.