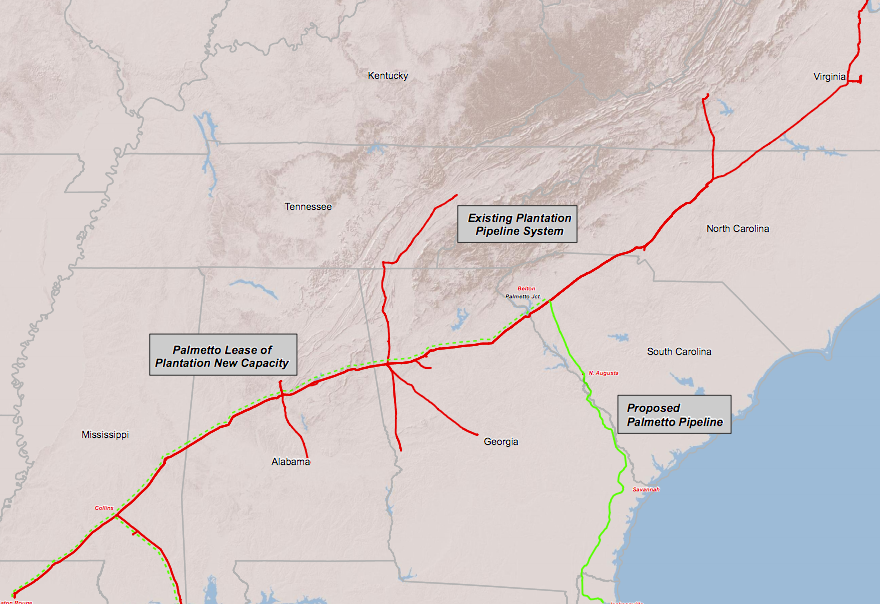 As the General Assembly lumbers toward its planned conclusion, a potentially explosive political issue is taking shape to the east, along the Savannah River and the coast. Like the topic du jour in Atlanta, it involves transportation, but of gasoline, not people.

On Feb. 13, the nation’s preeminent pipeline company, Kinder Morgan, filed for a certificate of public convenience and necessity from the state Department of Transportation, setting in motion a 90-day period in which the department can object to the company’s plans for the proposed Palmetto Pipeline.  If it doesn’t, Kinder Morgan gains the right of eminent domain to build the pipeline across a 210-mile swath of the state.

The $1 billion project would connect with the existing Plantation Pipeline, which runs from Louisiana to Virginia, allowing gasoline, diesel and ethanol to be pumped to markets in North Augusta, S.C., Savannah and Jacksonville, Fla. It would enter the state near Augusta, following the Savannah River and then the coast to its destination in Jacksonville.

The pipeline approval process seemed so greased that at first it appeared the state was going to fulfill its legal requirement to hold hearings by allowing Kinder-Morgan to conduct town meetings in some of the affected areas.

Last week, in the face of vocal criticism from opponents of the project and the Savannah Morning News, the DOT announced that it was reversing itself and will hold a hearing on the project.

Kinder Morgan claims that in addition to creating jobs, the pipeline will result in cheaper fuel costs for the Savannah area. Critics say the pipeline is mainly aimed at getting gas to Jacksonville and will be of relatively little benefit to Georgia. They also believe the DOT has failed to be a proper watchdog.

“Transferring the right of eminent domain isn’t like sharing the keys to a dump truck,” the Savannah Morning News editorialized  over the weekend. “It’s a tremendous power. The DOT must take its role seriously. It must wake up and do its job.”

Georgia isn’t the only state where Kinder Morgan has drawn opposition, as it races to build new pipelines to accommodate the nation’s growing oil and gas production economy.

Nine New England towns have voted in town meetings to oppose the Northeast Direct pipeline project. According to the Associated Press, about a fifth of the New York and Pennsylvania property owners affected by the Constitution Pipeline have refused to sign right-of-way agreements.

But wait. Didn’t droves of Republicans get elected to Congress last year voicing their anger at the Obama Administration for holding up the proposed Keystone Pipeline from Canada to Texas? Wasn’t that the first thing they wanted to vote on when they got to Washington?

Yes, and you will find voters up and down the route of the Palmetto Pipeline who voted for them. But like all public works that potentially involve heavy earth-moving equipment in your back yard, pipelines become less politically attractive the closer you get to them.

The recent spate of accidents involving trains hauling crude oil, including the 2013 accident in Quebec which killed 47 people, illustrates the need for improvements in the infrastructure of fuel distribution. But pipelines by their nature benefit those at the end of the line more than those in between, inherently creating the potential for political problems.

“Whenever a new pipeline is built there are concerns about the route and the environment,” Ron McClain, president of Kinder Morgan Products Pipelines, wrote in a recent op-ed piece.  I assure you that no route will be finalized without fully understanding the concerns of impacted landowners and communities and that every effort will be made to reach mutually beneficial agreements.”

Chances are good, very, very good in this business-happy state, that the Palmetto Pipeline will go forward. The casual way in which the DOT has treated the project has not gone down well, however. And don’t discount the heat that can be generated by the threat of heavy equipment in your driveway.

Previous Article
Why can’t Atlanta’s jobs training agency help more people find work, city councilmembers ask
Next Article
The Fabulous Fox should be a blueprint for how Atlanta must save its past