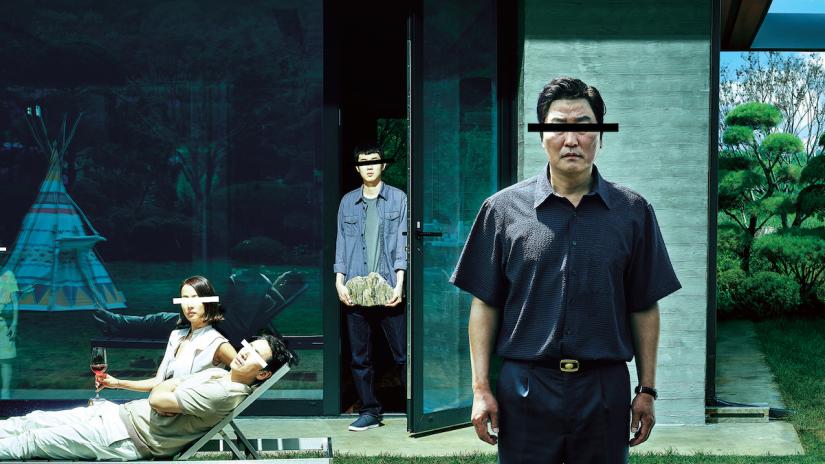 Crazy poor ones, too.

In fact, it’s difficult to say who the true parasites are here: the wealthy but vacuous Park family, living in blinkered splendor in their Architectural Digest home, or the conniving but under-motivated Kims, scrounging out a precarious existence in their basement apartment. 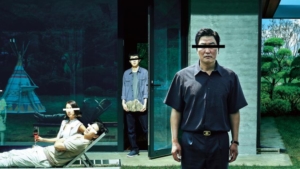 By sheer chance, the Kim’s son (Choi Woo-shik) is offered a job as a replacement tutor for the Park’s teenage daughter. Next in is his sister (Park So-dan), who pretends to be an art therapist for the teen’s spoiled little brother.

Their naïve mother (Jo Yeo-jeong) – she thinks her nine-year-old’s work recalls Basquiat – is all too easily fooled. So is her husband who fires his chauffeur when he finds the lady’s underpants So-dan planted in his car’s backseat.

Enter Daddy Kim (Song Kang-ho) – at least he’s got a legit driver’s license (or does he…). All that’s left is a place for Mom (Jang Hye-jin). That means doing away with the Park’s faithful housekeeper who, it turns out, has a few secrets of her own.

As anyone who saw Joon-ho’s “Snowpiercer” probably expects, there’s plenty of pitch-black humor. But as anyone who saw his earlier monster movie, “The Host,” “Parasite” has more on its mind than mere gallows humor. Sad things happen to both families. 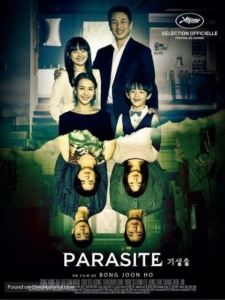 A poster of “Parasite” – a new movie by Bong Joon-ho

This isn’t necessarily unfamiliar territory, but the filmmaker treats it with his own unique spin. For instance, in the first scene, the Kim kids wander around the apartment, phones held aloft, trying to find a free Wi-Fi account (the old lady upstairs finally figured out what they were doing).  It’s quick-sketch character work, and it’s very effective.

Or consider how Sis cons her way into the art therapist job. A little bit of Google and a couple of clever ad-libs, she explains.

The Kim’s matter-of-fact amorality has just enough edge to be unsettling. Yet the Parks aren’t exactly blameless, either. Their privileged existence can be casually cruel, as when Mr. Park remarks that he can’t stand the smell of people who ride subways.

Perhaps the greatest compliment one can pay “Parasite” is you’re never sure what’s going to happen next Are things going to take a nasty turn or a funny one?