‘Patriots Day’ shouldn’t work, but it gets the job done 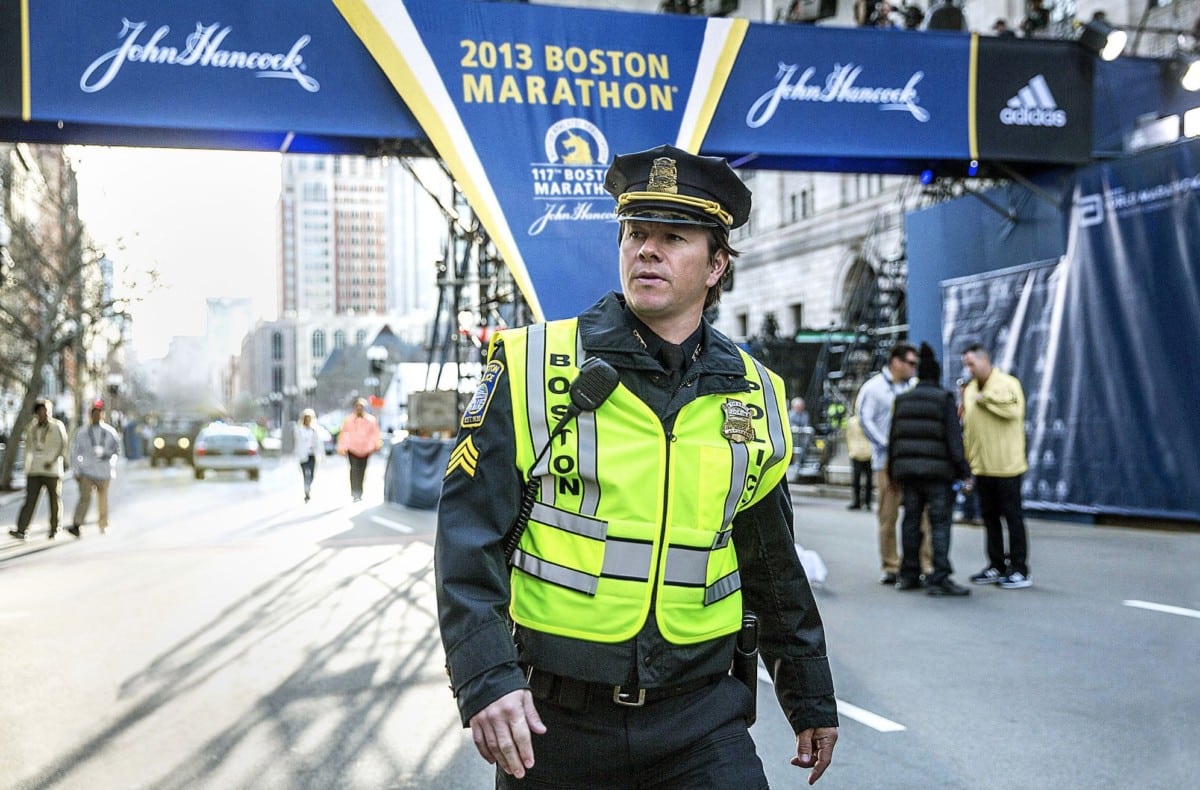 “Patriots Day” is apparently what locals call the day of the Boston Marathon.

It also makes a most fitting title for this tautly told movie about the Boston Marathon everyone remembers: The one in 2013 when a pair of bombs went off near the finish line, killing three and injuring over 250. 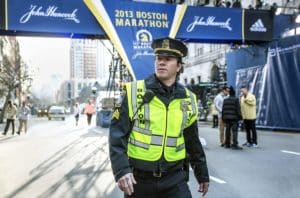 Mark Wahlberg plays Boston police Sgt. Tommy Saunders, who is an ‘Everycop’ who turns up at all the major events portrayed in ‘Patriots Day.’ Credit: post-gazette.com

And setting off a city-wide manhunt for the two brothers responsible for the mayhem.

The movie starts calmly, ticking off the hours before the race begins, showing us what various people are doing around town. Some are preparing to run. Others to attend. A veteran cop (J.K. Simmons) fetches breakfast for his wife. A rookie beams about scoring some concert tickets. And Tamerlan (Themo Melikidze) and Dzhokar (Alex Wolff) Tsarnaev pack up their homemade bombs and head downtown.

Meanwhile, Boston Police Sgt. Tommy Saunders (Mark Wahlberg) is still paying dues for past “aggressive” behavior (it’s never explained). That means he’s got to put on his dress blues – the “clown suit,” as he calls it – and mill around the finish line so the VIPS will feel properly looked after.

The bombs don’t go off until a half hour in, but the explosions still make you jump, no matter how much you’ve expected them. Panic and chaos come next.  One woman, clearly in shock, asks Wahlberg about a bloodied foot she sees lying nearby, wondering what it is.  “Don’t look at that,” he insists. “Look at me.”

The rest of the picture is about the aftermath. We watch the FBI, headed by very convincing Kevin Bacon, muscle in on the action (because, if it’s terrorism, it’s their turf). We see hospital staffs efficiently go about their work as victims are wheeled into emergency rooms.  And we witness both the collective shock and the determined coming together of the citizens of Boston.  As the FBI tries to figure out whether or not to reveal the faces of the murderers – Fox News is forcing their hand – Wahlberg votes for posting: “You gotta let Boston work for us.” 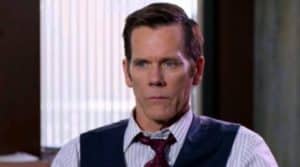 Kevin Bacon, who has long claimed Boston, delivers a convincing portrayal of the FBI agent leading the effort to capture the terrorists who attacked spectators at the Boston Marathon in ‘Patriots Day.’ Credit: sentireascoltare.com

Most of the movie is what the French call a “policier,” i.e., a cop-centric procedural unfolding step-by-step. In one of the best scenes, Dzhokhar’s wife (Melissa Benoist) is grilled by a slyly confrontational FBI interrogator (Khandi Alexander). It’s two very strong women, same religion, speaking the same language … and it’s a total stand-off.

Director Peter Berg wisely doesn’t tart things up. Though he does give in to some pre-tragedy foreshadowing – a couple canoodling in bed are just, well, are just gonna get hurt – he mostly takes a “Dragnet” “just the facts, ma’am” approach.

In other words, he lets the events – as well as the real-life villains and heroes – speak for themselves.  The randomness of the tragedy sinks in (wrong time, wrong place, in spades). So does the intensity of the manhunt for two rabid dogs on the loose. How many of us remember that MIT guard killed for apparently no reason or the Chinese student the brothers carjacked?

Cast as a kind of Everycop, Wahlberg turns up everywhere – the finish line, the FBI’s extensive recreation of the bomb scene, comforting that newly-escaped hostage, blasting bullets into the boat that was Tamerlan’s final hiding place before being taken into custody.

It shouldn’t work, but somehow it does.  Maybe that’s because Wahlberg has claimed Boston as his city for so long (as has Bacon). Or perhaps it’s just a smart show of restraint by the actor and his director

Whatever the reason, “Patriots Day” gets the job done.  And it does so, even in these deeply divided times, in a manner that makes all of us a little proud to be, well, patriots.

Previous Article
Georgia’s rural churches – historic treasures or relics of the past?
Next Article
GDOT awards pennies on the dollar to women- and minority-owned firms: GDOT report