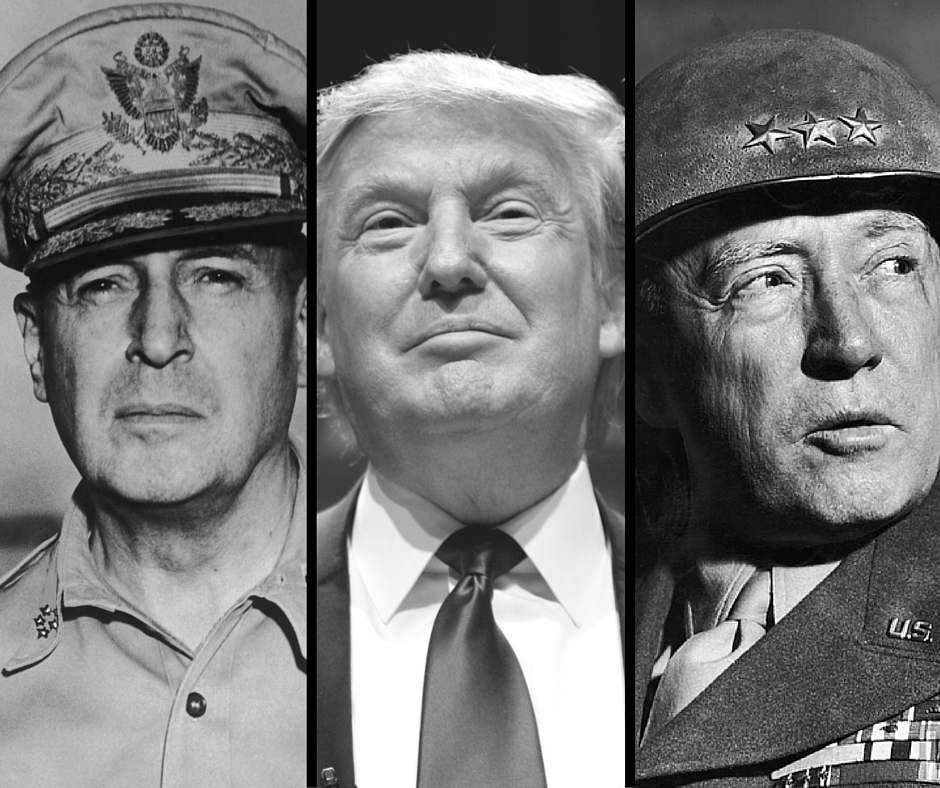 Donald Trump —"Within our military, I will find the General Patton, or I will find General MacArthur, I will find the right guy. I will find the guy that's going to take that military and make it really work. Nobody, nobody will be pushing us around.”
Share9
Tweet
Share3
Pin
Pocket
WhatsApp
Buffer
Email
Reddit
12 Shares

The final ceremonies observing the 70th anniversary of the Second World War were held last week, highlighted, ironically enough, by a huge military parade in Beijing marking the anniversary of Japan’s surrender. The various observances over the past four years have had a special significance because of the dwindling ranks of those who lived through the war.

For their children and grandchildren, WWII has always seemed a close memory, but it has been largely an unexamined memory. When Random House asked a blue-ribbon panel to choose the 100 best nonfiction books of the 20th Century back in 2000, they chose four books about the American Civil War and not one about the Second World War.

Only after the fall of the Soviet Union did there come a wave of new scholarship to join the flurry of books written soon after the war. That’s in part because of the wealth of information previously inaccessible to historians, and in part because the rivalry of the Cold War no longer caused the importance of the Soviet Union in the outcome of the war to be de-emphasized. As a result, few Americans know who Georgy Zhukov was, or why he may have been the most important military figure of WWII.

A number of good books about what the historian Antony Beevor has called “the greatest man-made disaster in history” have been published during these commemorative years. For an objective overview, this year’s candidates might want to find time for Beevor’s “The Second World War,” or Max Hastings’ “Inferno: The World at War, 1939-1945.”

Both British historians give high marks to the U.S. Navy and Marine Corps in the Pacific Theater and the U.S. Army Air Force in Europe, and praise some American ground commanders. But neither do much to burnish the popular image of either George S. Patton or Douglas MacArthur.

Beevor credits Patton as the American general most feared by the Germans, but faults him for his misjudgments in several incidents, agreeing with British Gen. Alan Brooke assessment of Patton as “a dashing, courageous, wild and unbalanced leader, good for operations requiring thrust and push, but at a loss in any operation requiring skill and judgment.”

Patton might have proved himself a great general, Hastings writes, “had he led forces with the Wehrmacht’s skills or the Red Army’s tolerance of casualties.”

MacArthur comes in for much harsher judgment in both histories, with Hastings faulting him especially for the costly invasion of the Philippines which he believes served no strategic purpose.

The ablest American commanders who emerge from both books are those who didn’t get movies made about them later: the steady-handed Chester Nimitz, who led the U.S. Navy back from Pearl Harbor, the soldier-statesman George C. Marshall, and Dwight D. Eisenhower, the businesslike manager of an alliance which included American, British, Canadian, Polish and French troops.

“With the exception of a few such enthusiasts as Patton, Allied commanders understood that they were mandated to win the war at the lowest possible human cost, and thus that caution was a virtue, even in victory,” writes Hastings. “By pursuing such a policy, they fulfilled the will both of their societies and their citizen soldiers.”

This patient approach probably extended the length of the war in Europe, but it spared the Western Allies from anything close to the blood spilled in the struggle between the Axis forces and the Soviets.

Trump is no fan of the plodding, casualty-avoiding approach. An analyst has recently calculated that if Trump had simply entrusted his 1974 inheritance to Warren Buffett and not dabbled in any business or real estate enterprises, he would be worth an astonishing $67 billion today, vastly more than even Trump has ever claimed he’s worth. But like Patton and MacArthur, he’s made a much bigger splash.

Once, in Baltimore, I got to know a grizzled old sort who had served in Patton’s 3rd Army. He was among the troops who heard the speech which was the basis for the one George C. Scott gives in the opening moments of “Patton.”
Months later in France, when he and his exhausted buddies had lost any concept of what day it was, a chaplain came up and told them it was Sunday. They were not particularly religious men, he recalled, but by then they had killed not only German soldiers but their French girlfriends, and the chaplain’s invitation to hold an informal service seemed more inviting than it would have previously.

Just as they were getting started, a jeep roared up from behind, and these troops got their second look at their general.

“Get this over with quick, chaplain,” Patton said when he saw what was going on. “We’ve got to get these boys back up front to die.”

We should be wise in our choice of generals.