Piedmont Healthcare’s service area now covers about 85 percent of Georgians, following its acquisition Aug. 1 of four hospitals through a sale to be funded with $1 billion of debt, according to a report from Moody’s Investors Service. 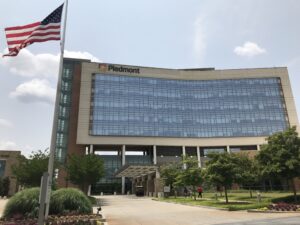 These acquisitions combine with Piedmont’s existing network to set the stage for continued expansion, analysts wrote in a rating action released Aug. 16:

One such expansion is in Augusta, where Piedmont Healthcare has signed a letter of intent to acquire University Health, according to the rating action.

The four facilities new to Piedmont are in regions of growing population, according to the Census report released Aug. 12: Snellville, Cartersville, and Macon.

Together, the facilities add 882 beds to Piedmont’s network. The figure includes an in-patient behavioral health facility in Macon, according to a statement issued by the entity that sold the four hospitals, HCA Healthcare, of Nashville, Tn. The statement does not indicate how many of the beds are set up and staffed, capable of serving patients.

HCA announced on May 3 the sale to Piedmont Healthcare of the following four facilities for a total of about $950 million:

The credit rating released Aug. 16 by Moody’s indicates analysts are fairly optimistic Piedmont will be able to service its debt – which will total about $2.4 billion once this latest round is sold. Piedmont reported $3.9 billion in operating revenues in fiscal 2020, according to the rating action.

The analysts reported that Piedmont’s past performance in absorbing acquisitions informed their decision to issue a credit rating of upper-medium grade on the planned bond issue. Analysts wrote:

Another document from Moody’s, a credit opinion issued Aug. 18, expanded on the theme of Piedmont’s proven ability to absorb its purchases and continue to post operating revenues:

However, analysts also have provided cautionary warnings. In 2018, Moody’s provided a negative outlook on the credit rating and noted that potential headwinds include the inability to absorb acquisitions while sustaining strong revenues; pressure from payers that could reduce the system’s market share, and – in a nod to Piedmont’s expansion plans – “Additional acquisitions that will impede deleveraging or dilute operating performance.”

The later is offset by investors’ appetites for growth. The No. 2 factor that could lead to an upgrade of the system’s credit rating was: Expansion of the system further outside the Atlanta service area without diluting operating margins, according to the 2018 credit opinion.

Potential revenue growth is a tonic for many credit challenges, according to the Aug. 16 rating action:

Previous Article
The “tsunami” approaches: With federal moratorium killed, Atlanta braces for crush of evictions
Next Article
A question for you: Whatever happened to minority joint venturing?