A City plan to unilaterally kill Neighborhood Planning Unit R and redraw other Southwest Atlanta NPU boundaries is facing resistance from City Council members — but some support from the community.

Dubbed “Neighborhood Strong,” the idea is being pitched by the Department of City Planning (DCP) as a way to strengthen NPUs along the Campbellton Road corridor. The proposal avoids mention of NPU-R’s history of transparency and leadership problems while not explaining why it is targeted for deletion. But NPU-R itself is largely supportive of the idea.

The Atlanta Planning Advisory Board (APAB) has pushed for more input in the process, both for the current proposal and the possibility of other NPUs being changed. Additionally, several City Council members this week filed papers to immediately halt the process and give only the council authority to change NPU boundaries.

“The proposed map is dismissive and targeted,” District 11 City Councilmember Marci Collier Overstreet told SaportaReport. “The misstep began when they did not consult or engage me, the councilmember that represents NPU-R.” 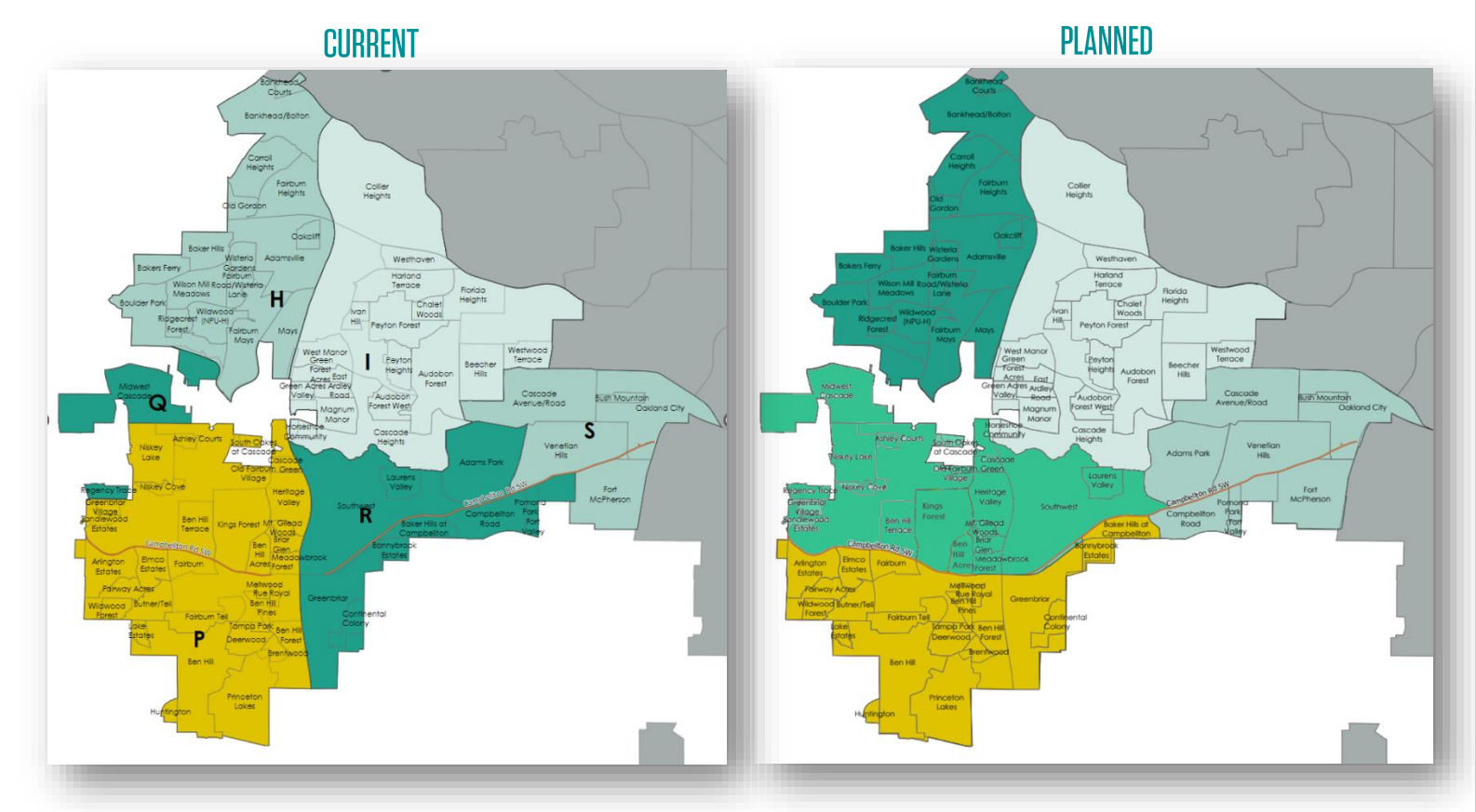 The current map of Southwest Atlanta NPUs compared to proposed versions with NPU-R deleted, as shown on the City’s “Neighborhood Strong” webpage.

But Donovan Dodds, who is recognized by the City as NPU-R chair after controversial dueling elections by two factions, said he supports his community’s desire for the change.

“It is bigger than just me,” said Dodds. “Realigning the boundaries gives the residents of NPU-R a new start without the stigma that looms over our NPU. It gives us an opportunity to collaborate on develop for the Southwest like never before.”

Dodds said the City presented the plan to NPU-R’s general meeting this month, adding he was surprised by the lack of negative reaction. “People had questions, but there was not an overwhelming lack of support or overwhelming ‘no’… People were more interested in working with the City,” he said.

Dodds said he understands the NPU-R name would disappear and that he himself has suggested an alternative naming convention for the entire system. “Part of my thing was not reusing the name NPU-R because I think that’s part of the problem with the stigma and everything attached to it,” he said, adding that matches the City’s desire for a “fresh start.”

“It is well past time for Council to make thoughtful, critical updates to the antiquated NPU ordinances,” Claire added. “And that would include far more than the proposed, single, knee-jerk reaction limited to, ‘Council must be involved in the process of any boundary changes.’” She said it should include a mandatory timetable for NPU boundary reviews, and a process including public input, criteria for organizing neighborhoods and a way to appeal.

The DCP proposal does not mention an NPU system reform effort that is underway, partly in response to NPU-R issues. That effort includes a list of “Best Practices” recommendations and a resident “Bill of Rights.”

Mayor Maynard Jackson created the NPU system in 1974 specifically to get public input on the City’s long-term comprehensive development plan. Today the 25 NPUs — each named for a letter of the alphabet — provide nonbinding comments to the City on virtually any issue, from liquor license applications to trash collection to major zoning code rewrites.

A recently launched DCP “Neighborhood Strong” webpage shows a proposed map of boundary changes that would delete NPU-R and affect NPUs P, Q and S. The map shows various NPU-P and NPU-R neighborhoods shifting into the new NPUs, which are not labeled with letters, apparently leaving the designation up to a future decision. A timeline shows public meetings proposed in October and November and, though the language is vague, an apparent wrap-up in December with ongoing discussions of some sort into March 2023.

The proposal is led by Leah LaRue, a DCP assistant director who heads the NPU division. She presented the proposal at a Sept. 17 APAB meeting, saying it has been in the works since Aug. 30.

Describing herself as a “visionary,” LaRue said she has been broadly “troubled” and “disturbed” by various issues with NPU management across the city, such as differences in handling applications and “inequity” in public participation.

LaRue said the particular targeting of Southwest Atlanta in the “Neighborhood Strong” proposal is because those neighborhoods are especially increasing in new developments and businesses. She did not provide any quantified comparisons with other parts of the city.

She presented the plan as particularly improving community input along the corridor of Campbellton Road, which is proposed for a new MARTA bus rapid transit line, among other changes. NPUs P, R and S currently represent parts of the corridor, dividing it with north-south boundaries. LaRue’s proposal would rearrange that to have two larger NPUs flanking much of the corridor with Campbellton itself as an east-west boundary line.

“This plan unites all of those voices to really raise their volume,” she told APAB.

The NPU boundaries have never been redrawn despite population changes. LaRue noted there are obvious disparities — NPU-Q has only 1,700 residents, she said — and indicated that a system-wide change might be needed down the road. But population equality is not the focus of the “Neighborhood Strong” plan, just one “consideration” in it, she said.

LaRue also referred to solving “historic conflicts and issues” in some NPUs, noting that includes one in Southwest Atlanta without naming NPU-R. She said two of the area’s four NPUs are currently strong — again without naming them — and that the new plan positions it to have “three strong, solid NPUs.”

Beyond the redrawing, LaRue said, DCP intends to provide more training and support to the local NPUs, and to also revive an older idea of “small area planning” in the neighborhoods. She said “it is certainly the mayor’s interest,” as well as that of DCP and other officials, for all NPUs to have “some sort of master plan… something that documents their vision for the place that they live.”

Complaining of “disinformation,” LaRue said she had held over 30 meetings with individual residents and neighborhood leaders about the plan. “The folks in the Southwest are largely excited,” she claimed, and that the majority of “negative feedback” or concern “is coming from folks outside of the Southwest.”

However, the idea of a DCP official unilaterally killing an NPU or changing boundaries is drawing concern.

APAB, an umbrella board of NPUs, has requested to participate in any boundary redrawing, according to member Kyle Kessler of NPU-M. At a Sept. 19 meeting of the City Council’s Committee on Council, NPU-S resident Adrian Coleman Tyler raised concerns, saying, “I believe in democracy… I’m shocked and disappointed if one employee in City Planning can rewrite [the NPU boundaries.]”

Amber Robinson, a City attorney, told the committee that current law gives DCP the “authority and ability” to set NPU boundaries. “They may do so without council approval of the designation,” she said, adding DCP still must follow any criteria previously established by the council in City code.

Overstreet and District 10 City Councilmember Andrea Boone, who represents part of Southwest Atlanta and chairs the committee, promptly filed two papers in response — a resolution seeking to halt the “Neighborhood Strong” process, and an ordinance to change the city charter to give only the council authority for such rearrangements to the NPUs.

Joining them in sponsoring the papers were Councilmembers Michael Julian Bond, Antonio Lewis and Howard Shook.

The resolution calls for the City’s chief operating officer to order an “immediate halt” to the process. The resolution says that it is “considered unfair and inequitable to segment [sic] reconfiguration without proper notice, discussion and review from the impacted elected officials and their constituents.”

Overstreet told SaportaReport that “I’m honestly not sure if it’s a good idea or bad idea to remove NPU-R,” noting that could mean changing all NPU boundaries in a domino effect. But she is certain that the council should be leading the changes and the process as called for in the legislation. “Until that time, I’m opposed to this targeted map,” she said.

Both papers are in the council’s Community Development/Human Services Committee. Overstreet is urging the public to support the papers at the committee’s next meeting, scheduled for Sept. 27 at 1:30 p.m. at City Hall.