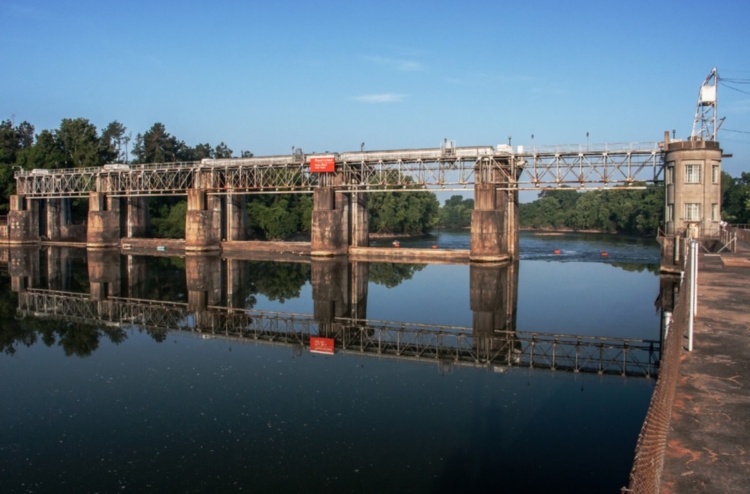 The lock and dam built in 1937 across the Savannah River, in Augusta, is to be removed to allow two endangered species of sturgeon to reach historic spawning grounds. File/Credit: sas.usace.army.mil

The newly released federal plan to promote spawning by endangered fish in the Savannah River north of Augusta ran smack into opposition last week from residents who don’t like a drop in the level of the river or the demolition of a lock and dam built in 1937 – two consequences of the plan. 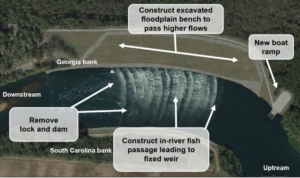 The U.S. Army Corps of Engineers is accepting public comments on its proposal to remove a lock and dam near Augusta and build a fish passage in the deep channel of the Savannah River. Credit: http://balancingthebasin.armylive.dodlive.mil

The U.S. Army Corps of Engineers released the draft plan Feb. 15, which triggered the Feb. 16 start of a 30-day public comment period. The corps plans to convene an “interactive workshop” in Augusta on March 6 at a location to be determined.

The corps’ draft finding of no significant impact, Fish Passage at New Savannah Bluff Lock and Dam, is expected to culminate this summer with a final decision from the corps on how to meet federal requirements to build a fish passage that meets various criteria regarding cost and impact.

The plan responds to a requirement of the Savannah Harbor Expansion Project, which is deepening the shipping channel at the Port of Savannah to accommodate the massive tankers being adopted by the shipping industry.

As part of the deepening project, the corps is to enable two species of endangered fish, shortnose and Atlantic sturgeon, to reach historic spawning grounds in the Savannah River north of Augusta. These grounds have been largely beyond their reach since the lock and dam were constructed. The facilities were built at the end of the Great Depression to promote commercial navigation along the river, a trade that ceased in 1979, according to a report by the corps.

The project must be started prior to January 2021 and be completed within three years, according to terms of the deepening project.

One event that spurred public awareness of the corps’ plan last week was the corps’ simulation of the lower water levels that are to be expected once the fish passage is built – and the corps’ ensuing decision to stop the simulation on Feb. 15, earlier than the planned end date of about Feb. 22.

The endangered Atlantic sturgeon is an armor-plated fish that can reach 14 feet and more than 800 pounds, as evidenced in this undated photo; the fish co-existed with dinosaurs during the last ice age, according to the National Resource Defense Council. Credit: nrdc.org

Residents were already complaining about their lack of access from docks to the river, and the appearance of the shoreline, when the corps was compelled to stop the simulation. As the corps described its call to end the test early:

The corps didn’t describe the nature of conditions reported by the homeowner.

The highest profile opponent to emerge to the plan thus far is U.S. Rep. Rick Allen. Allen’s 12th District borders the Savannah River from north of Augusta to an area north Savannah. Allen, a Republican, hasn’t issued a statement, but his website cites a published report in which Allen encourages constituents to participate in the public comment process: 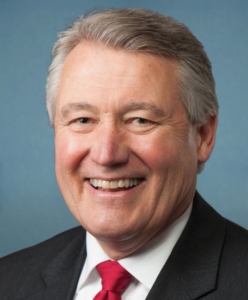 The Augusta City Council and North Augusta (S.C.) have voted to support retaining the lock and dam. The Savannah Riverkeeper launched its Rock the Dam preservation effort, which garnered 520 signatures before the petition was closed.

In addition, owners of riverfront property that no longer would have docks extending into the river have come out against the plan, according to a reports by wrdw.com and augustachronicle.com.

All this said, this particular proposal is no surprise.

The fish passage would be 500 feet wide and comprised of a rock ramp sloping upstream from the site of the existing dam, according to the corps’ draft finding. This is how the finding describes the features of the planned fish passage:

“Utilizing the sources stated above with the understanding that the structure will be fully developed after this report is approved, the features of the fish passage include:

Note to readers: According to the corps, “Comments can also be submitted in writing via U.S. mail to the Savannah District, U.S. Army Corps of Engineers, Planning Division, ATTN: Ms. Robin Armetta (PM-P), 100 West Oglethorpe Avenue, Savannah, Georgia 31401-3604, or in writing via email at CESAS-PD@usace.army.mil.”