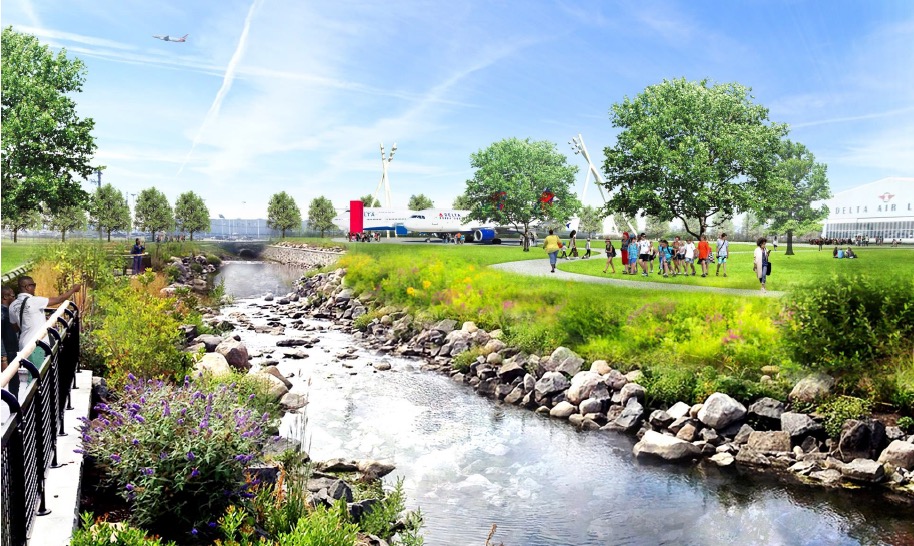 A proposed vision for new green spaces north and south of the airport includes a more free-flowing Flint River in several places including alongside the Delta Flight Museum, as in this sketch. Credit: ARC

It’s commonly thought that Georgia’s Flint River starts under Hartsfield-Jackson International Airport, though its path to the Gulf actually starts a little further north. Now there’s a move afoot to knit the uppermost Flint and its headwater channels into a network of parks and trails, turning areas around the airport into green destinations. 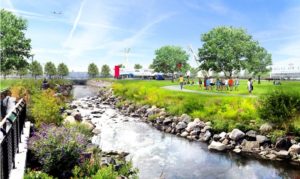 A proposed vision for new green spaces north and south of the airport includes a more free-flowing Flint River in several places including alongside the Delta Flight Museum, as in this sketch. Credit: ARC

It’s a vision right now, said Chris Faulkner, principal planner with the Atlanta Regional Commission, after he presented an idea entitled “Finding the Flint” to an ARC committee on Thursday.

The plan reimagines parts of today’s Flint both above and below the airport not in narrow ditches or treeless concrete channels, but loosed to flow a little more naturally amid riverside parks and paths.

The point is to bolster the health of the river as well as quality of life for people.

The vision looks familiar to fans of Atlanta’s Bellwood Quarry or Charlotte’s airport overlook park. There’s an idea to fill an abandoned quarry at with water as part of a park between Interstate 75 and State Route 85 south of the airport. And another to put a multiuse trail alongside the airport for planespotters.

“It’s amazing when you give folks an opportunity to go be a ten-year-old again and watch airplanes take off and land again, they’re happy to do it,” Faulkner said.

The vision is just that right now — a sort of imagining unconstrained by costs.

The next step is find to champions — public or private partners who want to take on nuts-and-bolts planning and fundraising for the plan or parts of it.

The work started with nonprofits American Rivers and The Conservation Fund, which were looking for a regional partner in natural resource and water planning, Faulkner said after the meeting.

The ARC is an intergovernmental coordination body that covers a ten-county region centered on Atlanta.

Check out the presentation slides for maps and more sketches.